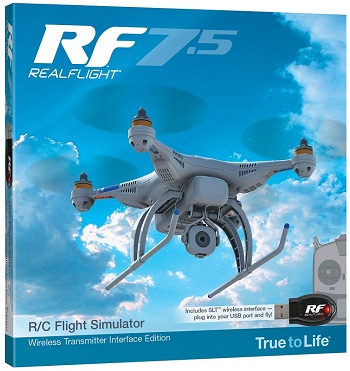 Every year RealFlight is far and away R/C’s best-selling flight simulator — and every year it just keeps getting better! RF7.5 is available in 5 different versions, and all boast amazing technological advances. One of the most exciting innovations is an RF7.5 edition that features a wireless SLT interface — a first for RealFlight. Other RF7.5 editions include:

All 5 editions of RF7.5 share other great new features that add to RealFlight’s fun and functionality:

All of these innovations complement the many existing features and functions of RealFlight, including Aircraft Editor with user-friendly tabbed dialogues, the most true-to-life physics of any simulator, reactive 3D objects, TrueView™ realistic lighting and so much more. With so many extraordinary features and so many options to fit the way you fly, RealFlight clearly remains R/C’s #1 flight simulator!

Pilots can test their skills in different game-like events. Completing a stage unlocks new, more difficult levels. The “Ghost Run” feature lets modelers compete against a visual image of their best individual times in any challenge.

Puts you in the cockpit for a true pilot’s-eye view. Many aircraft even feature enhanced window frame, engine and other detail for added realism.

Recreate the fun and unique flying experience of multi-rotor aircraft down to the last detail.

PhotoField sites are legendary for razor-sharp detail. 3D flying sites are embedded in over 5,000 square miles (12950 km²) of TruLife Terrain™.

The excitement of multiplayer combat grows when you and your opponents can fly any aircraft and add any weaponry you wish.