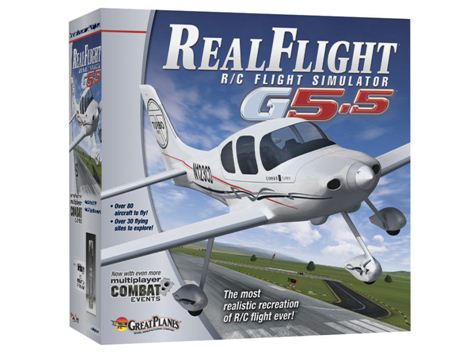 A new version of R/C’s most popular R/C simulator, offering more than ever before! With new combat events, glider launch options, orientation and so much more, G5.5 is the next generation in flight simulation. The famous accuracy continues in DeadRinger™ and Hardcore Combat – two new multiplayer combat events that push the envelope of sim science and pilot skill farther out than ever before. And with over 80 aircraft to fly and 30 flying sites to explore, the world’s most popular and advanced flight sim is better than ever.

In addition to the full version of RealFlight G5.5, Great Planes is also offering upgrade software for current RealFlight owners. There’s a special upgrade version made just for owners of G3, G3.5, G4 and G4.5, and RealFlight G5 owners can upgrade to G5.5 free of charge, just by going online.

Check out a few of the new features owners can look forward to in G5.5:

ü  DeadRinger requires the utmost in flying and fighting skills! Being the first pilot to fly through the floating rings is difficult, but doing it while other pilots try to shoot you down…? Almost impossible.

ü  Hardcore Combat virtually puts the pilot in the cockpit! It’s a test of combat survival

kills. Pilots face combat challenges that include doing battle with limited ammo and the

danger of “blacking out” during over-aggressive maneuvers.

ü  Lost? The Overhead Gadget superimposes a site map over the terrain, showing the

pilot’s location and the location of the runway.

ü  With the Sky Grid effect, pilots can overlay a colored grid on the sky during practice sessions, to

ü  For heli pilots, there are new graphics and paint schemes to help showcase flying skills

ü  With TruFlo Wind Dynamics™ you have control of direction, speed and whether you’ll

ü  And with more advanced thermal modeling, soaring is more realistic than ever!

ü  Customers with high-end machines will marvel at the detail in two graphically enhanced flying sites.

Both the Mode 2 and Mode 1 versions for G5.5 include the patented Interlink® Elite Controller,

which can function as a transmitter, an interface or both simultaneously.

RealFlight G5.5: The most realistic recreation of R/C flight ever™!