THE TUSKEGEE AIRMEN: The Red Tails of WW II 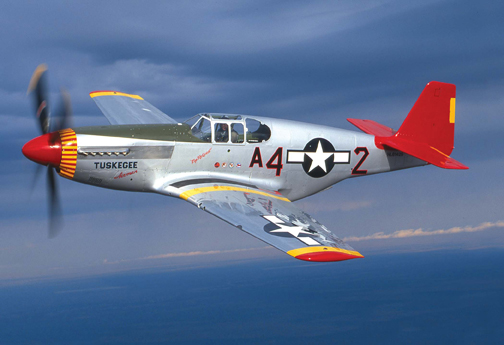 Hollywood has a way of rediscovering important historical events, wrapping them up and presenting them in a way that educates the general movie-going public that no amount of history classes ever could. Though few non-modeling folk know the real story, if you simply ask any RC warbird guy, Mustang lover or modeling aviation history buff about the Tuskegee Airmen, you’re bound to get all the information you ever wanted including aircraft tail numbers and pilot scores. So with the much-anticipated release of the new Lucasfilm’s movie Red Tails, a whole new generation of soon-to-be aviation buffs are going to get a blockbuster dose of this well-known and inspiring WW II story. On the silver screen
Scheduled for a January 20, 2012 release, Red Tails is an action drama film directed by Anthony Hemingway, from a screenplay by John Ridley and Aaron McGruder. The movie’s screenplay was inspired by true events and George Lucas served as the executive producer for the project. Based on the exploits of the famous Tuskegee Airmen of World War II, this motion picture promises to be one of the most exciting films aimed specifically at aviation enthusiasts and history buffs.George Lucas started brainstorming about the film back in 1988 and Thomas Carter was his original pick for director. Several writers were involved with the project until in 2007 John Ridley came to the scene and wrote the final screenplay. Though Samuel L. Jackson was an early candidate to direct and star in the film, Anthony Hemingway was chosen to direct in 2008. To keep the film as authentic as possible, Lucasfilm invited some of the surviving Tuskegee Airmen to the company’s Skywalker Ranch for interviews about their World War II experiences. Some of the surviving airmen also provided their original pilot mission logbooks. Production of the film began in March 2009 in locations such as England, Italy, Croatia and the Czech Republic. While shooting in the Czech Republic, the actors took part in a “boot camp” so they could actually live in similar conditions as the actual Tuskegee AirmenGeorge Lucas took over direction of the final reshoots in March 2010.
RED TAILS TRIVIA

A teaser “frame shot” from the upcoming movie. (Photo courtesy of Lucasfilm) 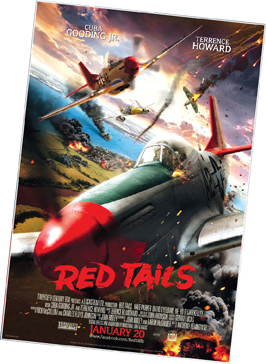 ■ This film is George Lucas’ first writing credit since Radioland Murders that is not associated with Star Wars or Indiana Jones.
■ Cuba Gooding Jr. is not new to the film’s subject. He has previously been in the 1995 movie The Tuskegee Airmen.
■ This is Terrence Howard’s second performance as a Tuskegee Airman; his first was in the 2002 movie, Hart’s War. 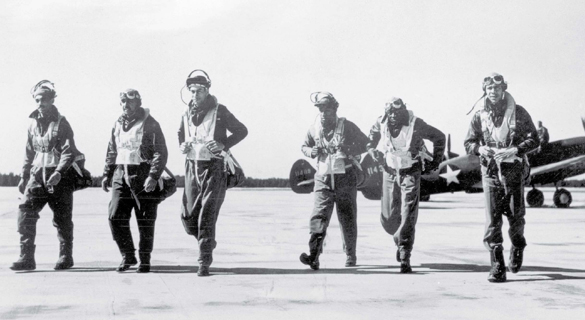 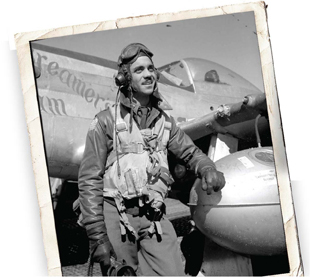 LEGENDS & FACTS
Since the 1970s, several widely publicized claims have been made for the Tuskegee Airmen. Here are the legends and the facts:
A PLANE WITH SOME HISTORY
| 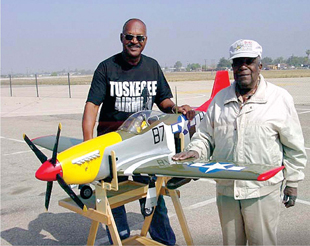 The start of many, Norton Airbase’s former commander and Tuskegee aviator Col. Paul Green puts the first signature on the wing. 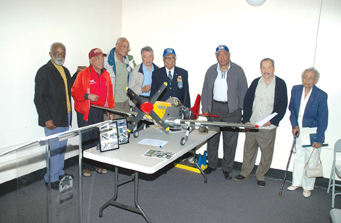 This is the L.A. Chapter of the Tuskegee Aviators who signed Marty’s P-51D. 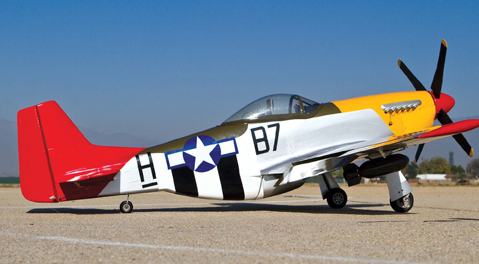 Here is a nice side shot of Marty’s P-51D Mustang.
I was fortunate to meet up with fellow modeler Marty Nelson who is a member of one of my flying clubs, the Pomona Valley Model Airplane Club. We were introduced because I wanted to see if anyone else had converted an ARF P-51 over to a Red Tail version. Once I met up with Marty, I found that he had much more than just a red-tailed P-51 conversion. Marty started his Hangar 9 P-51 1.50 size Mustang in June 2007 and after four weeks, he was finished. His work included a Saito 220 engine up front and JR radio for guidance. He added additional scale details with a cool-looking exhaust system and one very fine-looking Dynamic Balsa cockpit that was maxed out. But the truly unique thing on this Mustang was on top of the wing, which was inscribed with the signatures of 14 Tuskegee Airmen and women. Marty started this collection of signatures with the former base commander Col. Paul Green of the old Norton Airbase located in San Bernardino, CA, and this is now the location of the RC flying field at which Marty flies. After getting Paul’s signature, Marty was able to attend a meeting of the LA chapter of the Tuskegee Airmen, where he acquired the other 13 signatures on the wing of this great plane. —John Reid
If you would like to check out my interview with Marty and see some closeup videos of this unique P-51, click here.