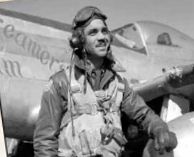 The much anticipated movie about the  WW II Tuskegee Airmen, Red Tails, is opening today! Is it true that the famed squadron never lost a bomber? That they shot down the first German jet? Before you head to the theater, test your Tuskegee knowledge with these legends and facts.

Since the 1970s, several widely publicized claims have been made for the Tuskegee Airmen. Here are the legends and the facts.

Legend: The Red Tails never lost a bomber under their escort.
Fact: In early 2011, the Tuskegee Airmen revoked their perfect escort claim. Around 2005, Air Force historians produced 1944-1945 mission reports showing that 25 bombers under Red Tail escort were shot down by enemy aircraft. However, that figure likely is better than most other 15th Air Force fighter groups.

Legend: The 332nd shot down the first German jet and/or established a record number of kills against jets.
Fact: The group claimed three Me 262s on one mission in March 1945 whereas the first jet kill went to the 8th Air Force in November 1944. The 15th Air Force’s 31st Fighter Group was credited with eight Me 262s, and the Eighth’s 357th Fighter Group claimed 17.

Legend: The Red Tails produced the only black fighter ace.
Fact: The late Col. Lee Archer, the reputed ace, was credited with four enemy planes destroyed without a fifth claim for a probable or damaged. He was an honorary member of the American Fighter Aces Association.

Legend: Tuskegee Airmen sank a German destroyer by gunfire alone.
Fact: There were no German destroyers in the Mediterranean because there was no mission for them. The vessel driven ashore by 332nd P-47s in June 1944 was a large WW I Italian torpedo boat confiscated by the Germans. In fairness, however, Army pilots were not trained in ship identification.