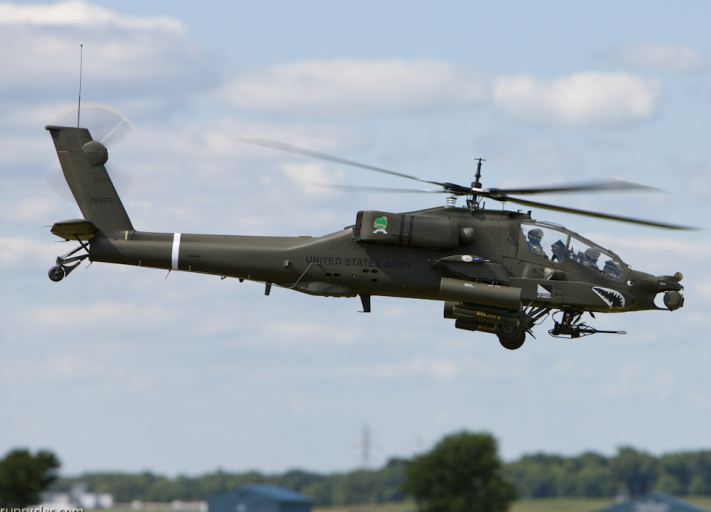 Like most scale pilots, I want my scale Apache helicopter to fly smooth, just like the real full scale.  In the R/C world, you will find yourself having to deal with, 2 blade fly bar-less, 3, 4, 5, and 6 bladed heads that leave you
with a hard to control scale helicopter. I wish I had the flying skills of a 3D master but I am average at best.  Flying your scale helicopter should be fun, not work.  I had been flying a well known flight stabilizer but
the helicopter would still fly unstable and would not hold level hovers above 10 meters or higher.  When I heard about the DJI wookong System, I know this was the system I needed in my IndyHelis.com AH-64 Apache.

When I got the DJI Wookong system, I read the manual several times and downloaded videos on the system. I felt very intimidated installing the system but I was able to e-mail others learning the system and it started to become clear to me how the system works.

I started with flying the Apache with only a Futaba 401 gyro to get a base line on the helicopter. I wanted it as smooth as I could before installing the system.  After I felt the helicopter was good to go. I installed the DJI
Wookong System.  The System came with everything you need but due to my electronics layout, I had to use some wire extensions from my controller unit to my receiver.

I downloaded the program to my laptop and went step by step as the program walks you through it. I had to stop at points to e-mail someone about settings I did not understand.  I later found out that if I had went back and checked on DJI Wooknog home site that there is always an up-date to the manual that would answer my question (it does help to ask someone when you don’t understand).

After the installation, I did my calibration and got the correct color lights on the LED indicator. The LED indicator is a great idea.  I had to mount my GPS disk inside the Apache body. This would help to keep a scale look to the Apache. I mounted the LED indicator under the belly so I could see the different modes that I was in during flight and to make sure the GPS was picking up all of the satellites. I found out that when you set your
calibration, there is no need to recalibrate just because you travel a long distances away to a show, the LED indicator will let you know if the GPS picked up all the satellites. 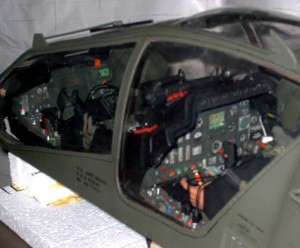 Using the suggested parameters in the manual, I started on my first test flight.  I stayed in the manual mode to ensure the Apache would fly ok. I was in 15mph winds and the DJI Wookong held great in all axis including the
gyro tail control.  After the test flight, I e-mailed others about how touchy the flight controls were and I  was told to add more to my flybar weight in the program and this will help to slow down the controls.

My second test flight, the winds were around 10-to 15 mph. I climbed to mid-stick and switched to Attitude mode (Auto pilot).  The helicopter quickly leveled out and was flat as if it were sitting on a table high in the sky and I
had my hands off the stick controls (it was the coolest thing I had ever seen).  I could see the LED indicator was flashing the color for attitude mode and the Apache was staying level but the wind was slowly moving it across
the sky.  I then switched to GPS mode and saw the LED indicator change to a different color.  The Apache staying level stopped on a dime and stayed in one spot in the sky.  I gave full rudder left then slowly full right and in the 15 mph winds the Apache stayed in that spot. I was so surprised that I forgot I was the one flying and not just watching.

I switched back to Attitude mode and I heard the blade speed change some but the Apache kept the altitude.  I could see the LED indicator changed back to the attitude color.  I finely switched back to manual mode and the LED indicator stopped blinking. The Apache dropped about six feet. I hovered for a while and then landed.  I didn’t know at first why I lost altitude but I realized that I pulled down the collective stick some.  When I was in GPS mode I was trying to see if I could get the helicopter to drop altitude.  When the DJI is in the GPS mode, it wants to hold mid-stick of your radio setting.

When I got home, I had a message inviting me to fly a demo at a full scale fly-in.  When I got to the airport, the winds were gusting 25 to 30mph.  Most the full scale pilots stayed on the ground due to the high winds.
All I could think about was how I could talk my way out of this demo.  Up to this point, I only had 3 test flights on the DJI System and now I am about to fly for an airport full of people. Feeling obligated to fly,  I pointed the nose of the Apache into the wind and hit the throttle.  I thought I would need all my flying skills just to keep the
Apache in one spot but the 3 axis gyro (IMU) did 90% of the work. I climbed to mid-stick and this put me higher into the gusty winds (not a good thing to do with high winds).  At mid-stick I hit the attitude mode. To my shock,
the Apache locked into a level flight and looked as if the wind stopped blowing.  I turned sideways in the high winds and the Apache sat like it was on display on a show table.  Not to push my luck, I came out of attitude mode and back to manual mode. The apache dropped altitude and I came back to my landing spot.  I felt like a flying ACE.  The spectators loved it. They thought I would give up and not fly all because of the high winds.

I believe the DJI Wookong system will open doors for the soon to be RC pilots and pilots with the high level complex control helicopters.  From what I have seen, I don’t think there is anything on the market that can come close to what the DJI Wookong System can do and that’s not even counting that you can fly waypoints as full autonomous, UAV capable, flight logging, go to home feature during failsafe and by the time you read this, DJI will have a Takeoff and landing Attitude mode.

Keep up the GREAT work DJI Wookong! A BIG Thank You to:   Swift and Terry of DJI Wookong Innovations. And Kerry Muncy of IndyHelis.com