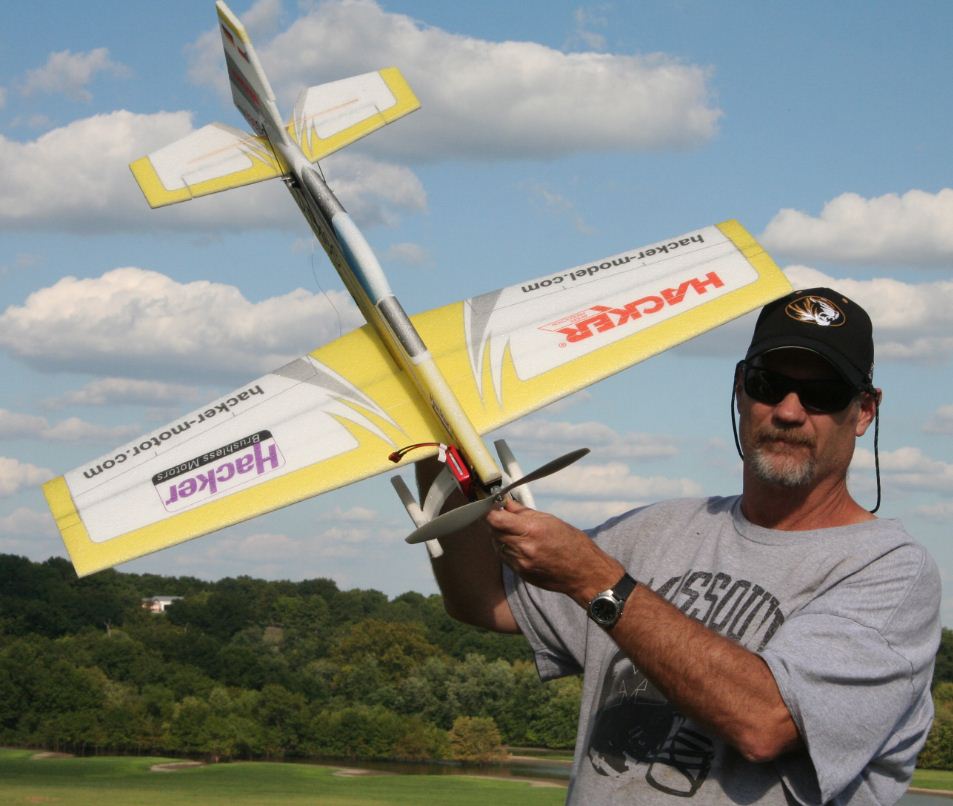 Hacker Model in concert with Hacker Motors has introduced the Extra 330SC 3D aerobatic EPP foam profile aircraft.  Advertised as “almost unbreakable”, the 330 Extra is a fairly large 3D foamy with a wing span of 39.37” (1000mm) and a fuselage length of 39.76” (1010mm).  The plane is designed for a minimum of 4 channels and features a fully CAD painted airframe in the same paint scheme as the German full size version and comes in red, yellow and violet.  The instructions are excellent and use a combination of photographs and schematics along with well written text.  If you have never built a Czech manufactured Hacker plane before be prepared for two versions of text in Czech and English.   The build is simple and because of the EPP foam you can use any type of CA glue.  The kit includes all EPP foam material, carbon reinforced spars, foam landing gear strut covers and wheel pants, a lite-ply firewall and all linkages right down to the EZ connectors.  It also has a float kit option that can be added.    I believe in my experience flying this Extra, the range of piloting skills is in the mid to upper end of needed skills.  By that I mean, with the control surfaces dialed back it is a gentle performer that can be hand launched or it will take-off from the ground.  I rate the Extra somewhere between intermediate and expert, but I base that on the need to fully understand setups, radio mixes and weight and balance if one does want to
fly at the expert level. 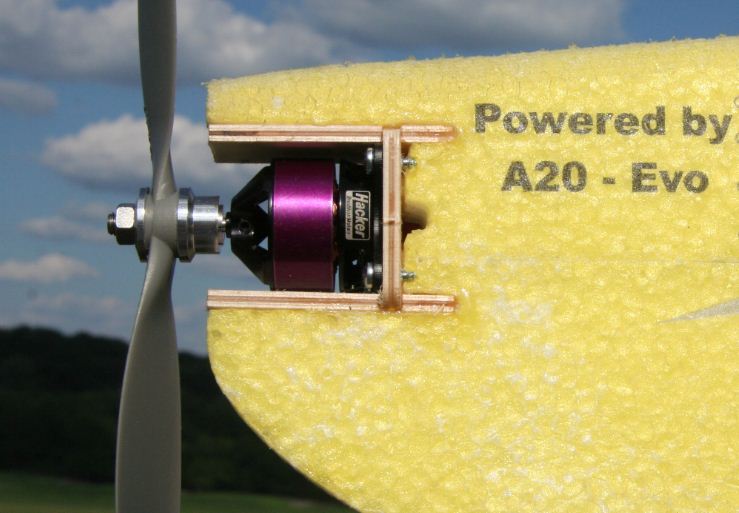 Unique features
There are a lot of great features with the Hacker 330SC but the paint scheme is worth mentioning again.  The crispness of the paint and the detail are very good.  I flew the yellow version but my guess is the darker colors would be easier to see in the air.  The control surfaces are large and hinges are molded into the EPP foam.  In fact, the ailerons are one third of the wing and at the wing root, measure 4.5 inches.  The Extra 330SC profile fuselage and wing use carbon rods that are recessed into the surface of the foam.  A slight cut allows you to push the rod in and then a thorough coating of CA creates a stiff wing and fuselage. I chose Corona DS-929MG servos simply because they had the torque suggested for the Extra and their line of digital servos are well made.  While micro servos are suggested, 12.5g servos would be as big as I would recommend.  For me it was all about the quickness and torque these digital servos provide.    You want the Extra to weigh in complete at about 450g, so it becomes important that your components allow that final weight.  In total, the airframe and accessories weigh about 200g, so you have about 250g to work with. Your largest components include the receiver (9g), the ESC  (20g), motor (42g) and servos (50g) and what is left is dedicated to the battery or about +120g.  My original setup weighed in at 415 grams (640 mAh LiPo), but latter changes with larger battery had me at about 466 grams (1300 mAh).  So you have really plenty of room to adapt to components.     Hacker recommends the A20-26M motor that delivers 1130KV, 150 watts and 15 amps with a 9×7 prop.  My setup produced 11.6 amps at full throttle but needed to swing an 8×3.8 prop to meet the Hacker X-12 Pro ESC recommended.  The motor and two tail servos become critical components to correct weight and balance.  If your tail servos are too large it will take more weight up front and at 42g, the A20-26M is as far forward a weight as you are going to get.  I completed the build with the Castle Creation Berg7P receiver.  I am still a big fan of FM radios, and few receivers have the capability of the Berg 7P.  As a full range receiver, I had the option of also using their Castle Link hardware and software to set fail safe servo positions.  The true digital signal processing virtually eliminates any glitches the fit into the underside of the fuselage was perfect. 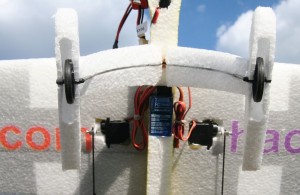 Conclusion
EPP is wonderful and the Hacker Extra 330SC makes great use of this building material. As a 3D platform and using a radio with multiple mixes, the Extra 330SC can make most 3D pilots look really good.  I would support more power than the A20-26M that I believe will transition to greater maneuverability and overall more air over
the tail.  Be sure to use servo control arms that maximize the movement available to the control surfaces.   This is a great intermediate to expert aircraft and when setup correctly will be and excellent plane to advance your 3D skills.

IN THE AIR
The A20-26M motor is designed for planes weighing up to 400 grams, while the Hacker 330SC can be flown close to this, it might get heavy for the A20-26M.  I honestly would have liked to have seen both more horsepower and weight up front.  As well, I needed to remain under 12 amps for the X-12 Pro ESC so I was forced to drop to an 8×3.8 prop.   Weight and balance are critical to the success of 3D flying; not only CG, but lateral balance.  So work towards meeting the exact weight of the Extra so during the early flights you have an idea of how the model was designed using the Hacker’s parameters.  The Extra 330SC can haul a lot more weight with up to a 1300 mAh 11.1v battery on the top of the leading edge of the wing.  I found the Extra was better in flight with a few more grams on board further back and in the end I was flying at more like 466
grams with a 1300 mAh 11.1v LiPo.   As an aerobatic 3D plane, there is nothing the Extra 330SC cannot do.  With ailerons consuming over 30% of the wing the roll rate is impressive.  I pushed the elevator beyond the recommended 50° mark to almost 60° and thought I gained better hover entrance, push-overs, walls, and waterfalls.  Make sure when you install the horizontal stabilizer that is it indeed perfectly level with the wings, otherwise you will have trouble getting a good inverted and knife edge flight line.  As well, move the battery around to gain the best air performance.  Once I placed the battery on the wing and moved it from the nose, I began to feel the plane better.  Rudder movement is limited by the elevator so if you want more than 45° prescribed you may have to trim the elevator.  For knife edge flight and given the A20-26M power up front I felt like I could use a little more rudder authority.     I almost always fly off of grass, with a small hard surface for takeoffs and landings.  As a park flyer, I would recommend removing the landing gear as the grass will hang up the gear and should you impact the ground with much speed the gear holder may break out of the fuselage. The motor mount is well attached to the fuselage and very durable. 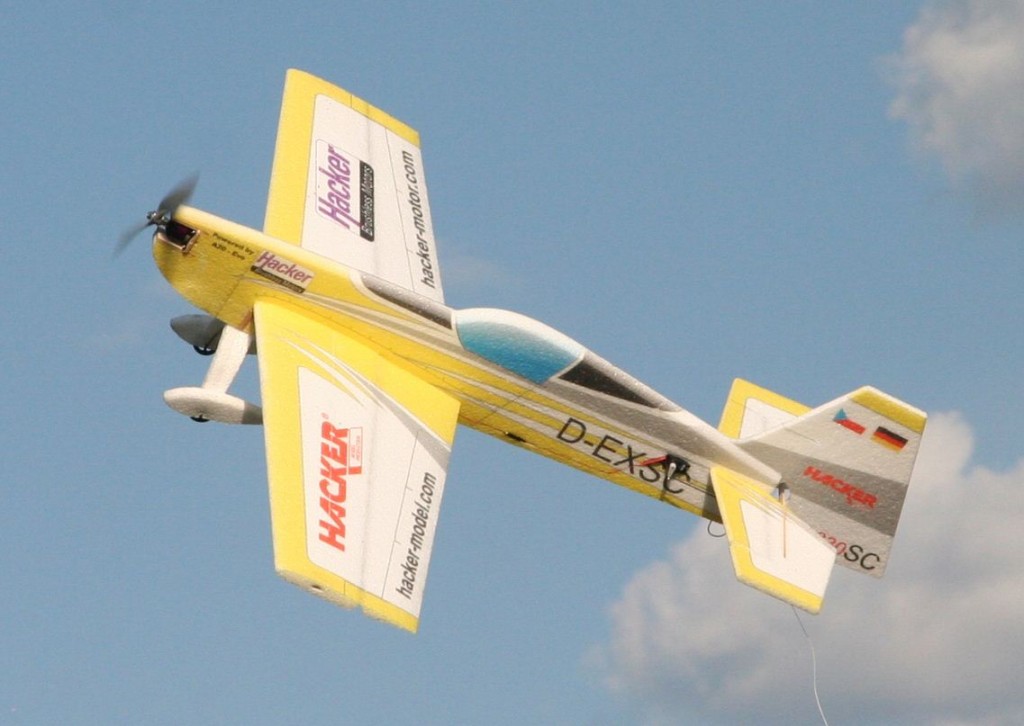 >Tracking – Get the Extra symmetrical and all surfaces level.  EPP can be flexible or even slightly warped from shipping.  Lay it all out and use a level surface to install the carbon spars to make sure your airframe is true.

>Aerobatics – More power would improve the overall aerobatic capability, but the Extra is an overall winner in my hangar.

>Glide and stall performance – Glide is not exceptional, because the EPP surface creates drag as would be expected.  Stalls were subtle, and not really anything I felt I needed to be constantly monitoring.

Pilot Debriefing
To really get the most out of the Extra 330SC take the time needed to set your CG, weight, control throws, and expo.  Be patient and fly, look at what the Extra is doing, land and adjust your mixes.  Each build is different and as components vary so will the flight character.  Just keep working at it and you will grow to appreciate the ease in hand launching and controlled landings necessary and common to the Extra 330SC to tweak your new flying machine. Once you get it right, this will be a great aircraft to fly often and get better at 3D.