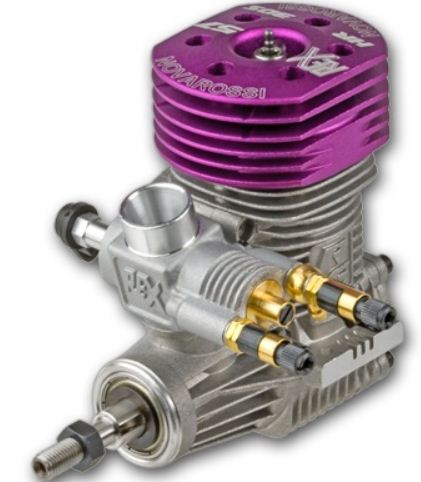 Contributor Rob Landry has been using the new Novarossi .57 in his Raptor X50, and he likes what he’s seeing! He writes, “I have gotten to really like this engine. Novarossi is my engine of choice in my on-road and off-road cars, and the new .57’s  3-needle carb makes a HUGE difference from the older 2-needle design. Once it’s properly set up, the engine comes alive with a clean powerful tone.

The muffler is the Novarossi H5 polished pipe, the pipe has a soft mount like that of the Hatori.  It comes with different header flanges for carbon and plastic frame helis. The test helicopter is the Thunder Tiger X50
with torque tube drive. We ran Rapicon 30% nitro fuel and added the .2mm shim to compensate for the higher nitro.

The engine is a beautiful piece and it has very nice casting and machine work. The piston has an L-shape compression ring as well as “oil grooves” on the piston. The engine has a different sound than the other
top name manufacturer’s due to the porting in the motor  and the pipe design of the H5 muffler.

I have tried 620mm,600mm blades and the 600mm Radix blades seem to work best for this setup. The engine likes to rev and I found a head speed of 2200 rpm gives awesome “pop” and the engine recovers very well after tic tocs and rainbows.

The engine is performing very well and has ample power for any manuver you can throw at it.”