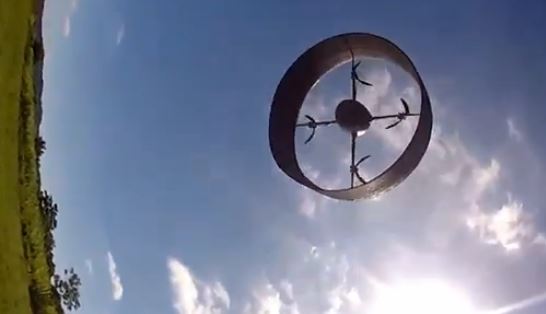 Check this out! Insitu’s new South American partner Santos Labs unveiled its multirotor  at LAAD 2013. A fish-eyed 360 degree camera is fitted to the 1.5kg  quadrocopter. It uses an annular wing to provide lift and prop guard. Named Orbis, the platform is waterproof and is intended to meet a Brazilian Navy requirement. The flight video shows a sprightly performance, for just how many minutes we wonder. Santos Labs writes, “The Santos Lab develops a UAV project with pioneering features. Orbis, as it is called, is the first UAV in the world to take off vertically and transitioning without the fall. It can be used to monitor the safety of urban areas, with much use in big events like the World Cup and Olympics, and can provide support for police and military operations in conflict areas (such as the occupation of slums by example). Additionally, the UAV may also be used in monitoring night, since it has a possibility to be equipped with the infrared camera.”