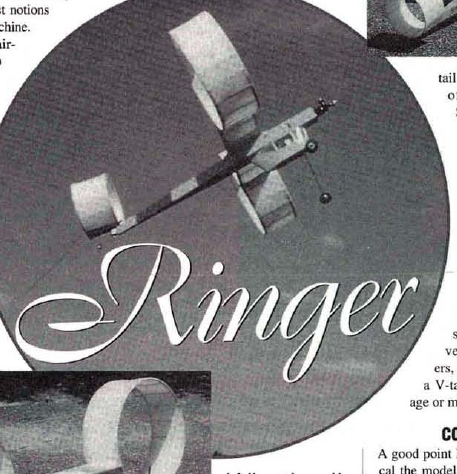 IT LOOKS LIKE the counship dance of a pair of lampshades. or like a time traveler from a fu ture thaI has outrun our ideas of common sense. but the “Ringer”‘ is a novel design that bas its roots firmly planted in one of the oldest nOl io05 of how to build a fly ing machine. Aircraft with annular airfo ils (or lifti ng drums) instead of conventional wings have been theorized, proposed and actually built since around the turn of the century. Earl ybi rd Danish pioneer Ellehammcr tried \0 fly one. (He had belief luck al a later date with a more conventional design.) Louis Bleriol actually did fly a somewhat d il uted version–a flattened oval tail to increase the wing angle of altack for takeoff! Scratch-builders might want to give further consideration 10 the control linkage. which could be used to work the “cruciform” tail of a sca le Santos· Dumont “Dem· o ise lle,” or designed into gimballi ng tail feathers for your latest original. You could even t ry an an nu lar drum inSlead of Ihe usual tai l surfaces on something conventional. For soaring gliders, il could be used to operate a V ·tail without a complex linkage or mixer function.

To read more, open the PDF by clicking the link: X03961 Ringer