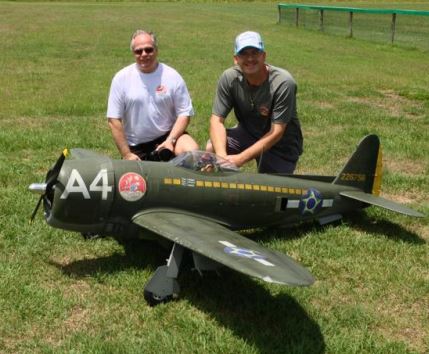 Yes, that’s right … this P-47D is outfitted in true Brazilian livery! Our friend Rogerio Ribeiro de Arjaujo  (left) sent these photos of the P-47D Thunderbolt that Dino DiGiorgio will be flying in the Pro Am Pro (prop) class this year. He writes, “This very unique model is a Meister Scale Platinum Series P-47D bubble canopy  with fiberglass fuselage that we have been building for 3 years. It has all the bells and whistles, like operating landing, positioning and formation lights, Sierra Scale landing gear, DA 85 engine, working cowling and intercooler doors, a very scale pilot, very detailed cockpit and more than that, a very unusual livery. The full-size plane was flown by Brazilian pilot Alberto Torres of the Red Wing, First Flight Squadron, Brazilian Air Force, in Italy, Winter 44 to Spring 1945. In only 6 months in the ETO, this pilot collected nothing less than 99 combat missions. His call name was ‘Jambock Red 4.’ The model portrays what was the last mission, on a very weathered and battle-worn aircraft. As a matter of curiosity, only two Latin American countries fought during WW II: the Brazilians in Europe and the Mexicans in Asia.   The aircraft flies like a dream and after we kill some gremlins, it will be ready for TG this week! ” 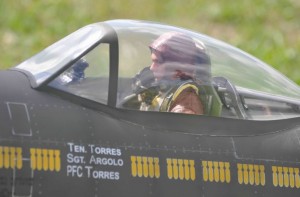 Rogerio notes this is his “mini me” in the cockpit! 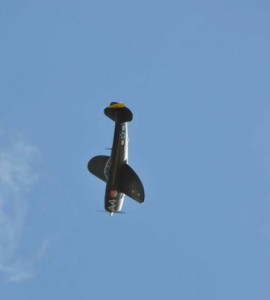 On a dive-bombing run!