A WW II warbird pro, Lou Cetrangelo of Saint James, NY flies an amazingly well built Corsair. A Ziroli design, Lou’s Goodyear FG-1D Corsair, (which he has flown in the Pro-Am Sports Propeller category at Top Gun), . sports a new DLA 4-cylinder engine from Goldensky RC. With a 128cc displacement it is a bit overpowered, but the Corsair looks and sounds great turning a 26×14 3-blade carbon-fiber prop. With its optional slanted plug configuration, it fits nicely in the stock cowl. It features two ignition modules and two exhaust stacks. 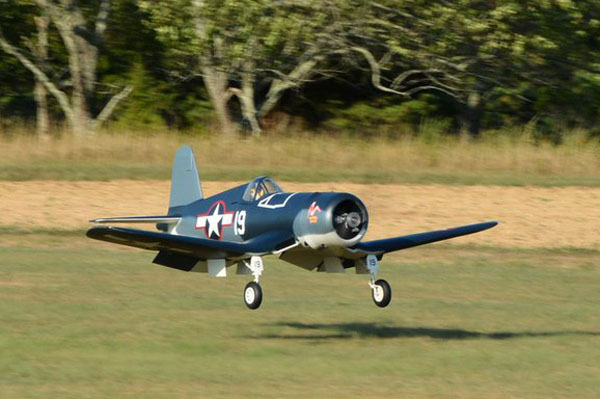 The fuselage and cowl are fiberglass from Ziroli Plans and Lou cut out his own wing, stab, fin, and rudder ribs using the plans as a template. The receiver is a 12-channel PowerSafe spektrum with the T1000 telemetry module. In addition to the reception of the four receivers and battery voltage it also monitors the cylinder head temperature and engine RPM. For stability he is using an iGyro with a GPS module for gain control. The receivers are a mix of Spectrum and Hitec RCD. To power the electronics I am using dual two cell 2,500mAh “No BS” A123 batteries and a 4,000mAh 2 cell LiPo for the two ignition modules.

During construction Lou added a full cockpit with a pneumatically controlled sliding canopy. The main and tail gear doors are molded fiberglass with 3D printed inner doors for a scale appearance. The retractable tail gear is from Sierra Giant Scale and the mains are by Robart. Both are operated by air as well as all the gear doors.

The plane weights 46 pounds but it flies very well. Lou is using a  3-blade semi-scale carbon fiber Biela 26×14 prop. Lou says he must have over a hundred flghts on the Corsair. One of the best parts of flying the Corsair is its very distinctive sound at near full power.

The Ziroli fiberglass fuselage comes with a separate tail section that is attached later on in the construction, and it made working on the Corsair a bit easier. Lou cut slots in the elevator and stabilizer for scale hinging and used a length of music wire with an internal control horn for control. He also fabricated two elevator horns from G10 fiberglass material attached to an aluminum rod for internal control. Though a wing kit is available, Lou cut out all the parts himself with a band saw and scroll saw. 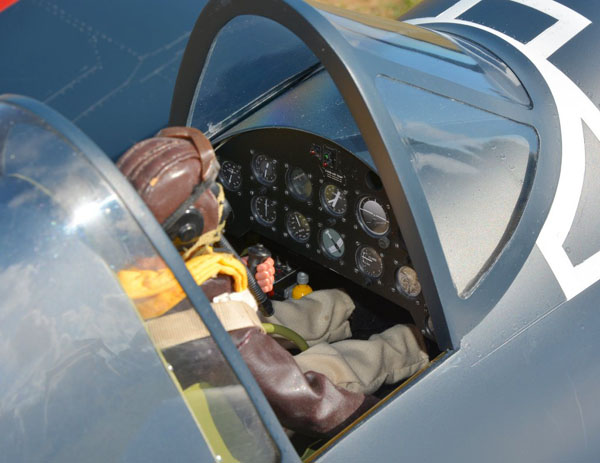 The tail gear is from Sierra Giant Scale, and Lou’s Spektrum DX18 built-in sequencer feature will be used to operate the landing gear and gear doors. He installed a separate air valve for each gear and door as well as for a functional sliding canopy. For increased scale detailing, Lou made up framework parts for the inside of the landing-gear doors using 3D printing from Shapeways.com. KlassKote epoxy paint and clear coat was used for the finish, and the total weight of the Corsair is 40.5 pounds. 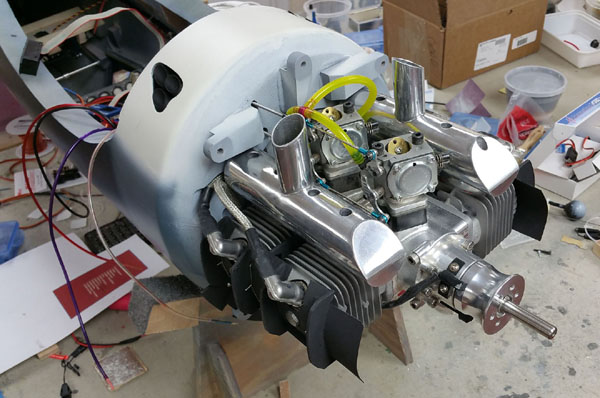