Hailing from Saint James on Long Island NY, Lou Cetrangelo will be competing this year, (his ninth time), in the Pro-Am Sportsman class with his impressive Ziroli-designed Goodyear FG-1D Corsair. The FG-1D was a Chance Vought Corsair built under license by Goodyear, and Lou’s version has a monster of engine installed in the form of a 4-cylinder DLA 128. This 128cc powerplant sounds amazing while turning its 26×14 three-blade carbon-fiber prop. With its optional slanted spark plug configuration, it fits in the stock Ziroli cowling and provides gobs of power. It has twin ignition modules and two exhaust stacks. 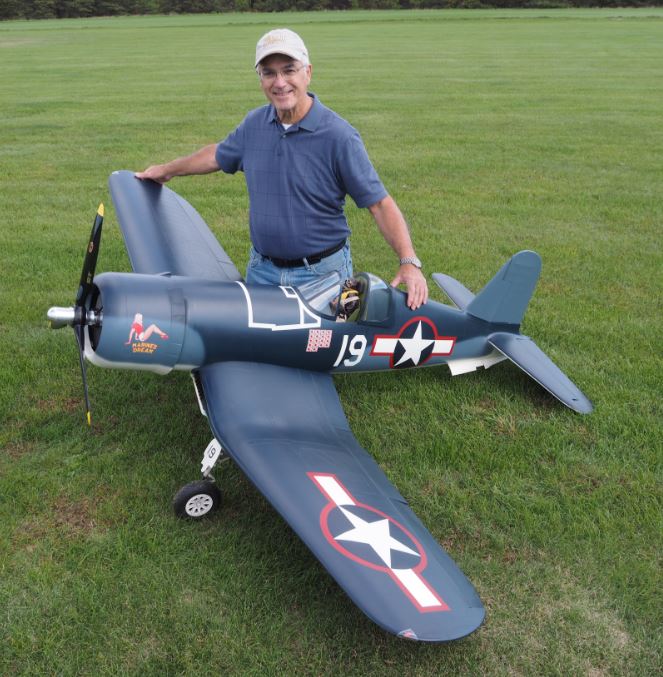 Lou cut slots in the elevator and stabilizer for scale hinging and used internal control horns for control. The tail gear is from Sierra Giant Scale, and Lou used the built-in sequencer feature of his Spektrum DX18 to operate the landing gear and gear doors. For increased scale detailing, added framework parts for the inside of the landing-gear doors using 3D printed parts from shapeways.com. Klass Kote epoxy paint and clear-coat was used for the finish, and the total weight of the Corsair is 40.5 pounds. It took just under a year to complete his Corsair. Lou has been building model airplanes 60 years, and flying his first RC plane about 35 years ago.