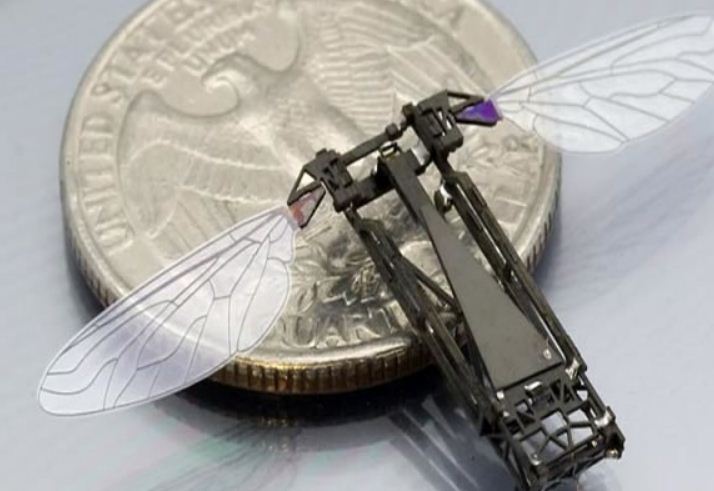 This news story from Gizmag takes a look at Harvard’s amazing Robobee, a tiny air vehicle that uses its wings to take off and maneuver. Don’t miss this video!

Harvard researchers are getting closer to their goal of developing a controllable micro air vehicle called the Robobee. The tiny robot was already capable of taking off under its own power, but until now it was completely out of control. By adding two control actuators beneath its wings, the robot can be programmed to pitch and roll.

The team is now working on a feedback controller that will allow the robot to yaw, which when combined with pitch and roll should allow it to hover. Until then, the Robobee is still just crashing, albeit in more spectacular fashion than it did before. Eventually, it could be mass-produced to perform pollination or assist in search and rescue operations (along with a variety of other things).

Meanwhile, the Green Brain project underway at the Universities of Sheffield and Sussex in England may provide the necessary artificial intelligence for such a robot. The ambitious project seeks to build a working simulation of a bee’s brain by mapping the complex neural connections that process the bee’s senses. This simulation could then be harnessed, enabling a robot to make navigational decisions on its own.

“Because the honey bee brain is smaller and more accessible than any vertebrate brain, we hope to eventually be able to produce an accurate and complete model that we can test within a flying robot,” said Dr James Marshall, a computer scientist at the University of Sheffield.

However, it seems unlikely that the two projects will be compatible any time soon. Simulating even an insect’s brain requires some intense hardware – in this case, the researchers are working with NVIDIA graphics cards normally reserved for the latest video games. It will be awhile before that kind of processing power can be carried on Robobee’s miniscule frame. You can see it performing some in-flight maneuvers in the video below.