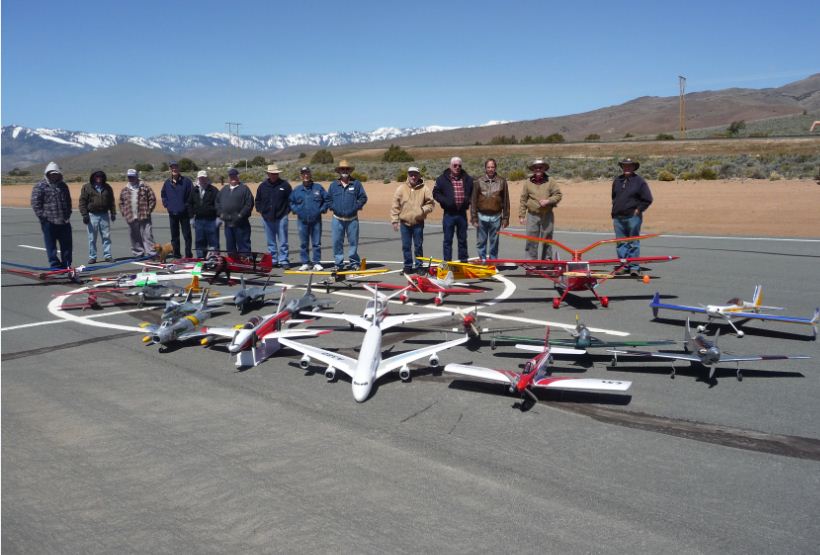 I get a lot of requests from clubs for donations and am always happy to send some free subscription cards and hats to add to the event raffle or for prizes. Not so long ago we sent a care package out to the High Sierra Radio Control Club for their Roll Out Party, and club member Gary Fuller was kind enough to send a short report and photos of the festivities. It’s a great idea for the first flying event of the season! Photos by Kirk Baron.

The third High Sierra Radio Control Club (HSRRC) Roll Out Party was held on April 30 at the Pony Express Air Park in Carson City, Nevada. For those of you not familiar with the “roll out concept,” this is an aviation tradition that manufacturers use to present their latest aircraft. They usually roll out the plane to be featured through the hanger doors for the first time for public viewing. This event is held with a great deal of pomp and ceremony. VIP’s and visitors may indulge in shrimp and crab d’oeuvres and champagne while viewing the aircraft and a number of officials give speeches. In keeping with this tradition, the HSRCC has a bull horn and provides homemade chili prepared by our own Mr. T and soft drinks. Participants came from Reno, Minden, Garderville and Carson City.

For the models, any airplane that is new, has not yet flown at our field, or has had a substantial rebuild and is displayed, a ticket is given for our raffle prizes. It is not necessary to fly the aircraft but as is all our field events, flying is encouraged. This is NOT a judged contest or competition.

Twenty-four planes showed up this year ranging from a 36-inch electric Micro Antic to a 101-inch Stinson Stationwagon powered by a DLE 55 CI gasoline engine. The co-hosts come up each year with a raffle plane to be given away as one of the prizes. This year it was a 72-inch Lonzo Bomber with an OS 32 engine and a Futaba radio donated by member Bob Brogan as well as the contributions of MODEL AIRPLANE NEWS.

After the displaying of the aircraft with many flying, the participants and spectators were treated to the homemade chili and soft drinks. The Club handles the total cost of this event. The Lonzo Bomber raffle prize was won by Ray Brindos of Minden, with MAN hats going to Les Harris of Carson City and Louie Scheel of Gardnerville.

Considerable flying was conducted on and off the field with a bit of chili consumption in between. Mother Nature cooperated by giving us a beautiful sunny day but kept summer from officially joining us with a cool breeze. The Roll Out Party is always held the last Saturday of April. If you have a new plane or one we haven’t seen, come join us, we would be happy to see you and you might even like the chili.