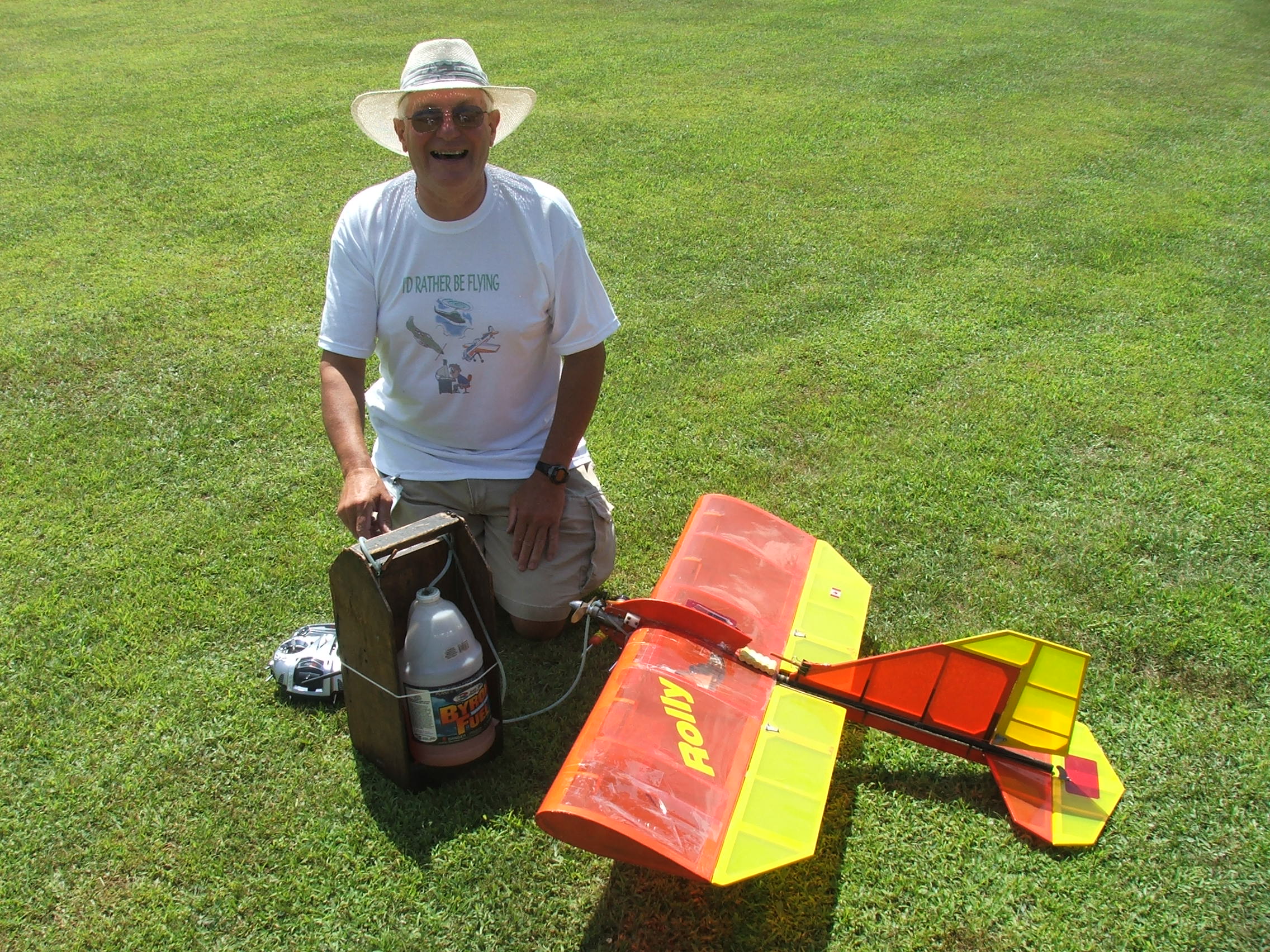 Rolly, tell us how you got into RC and your involvement with the Kingston RC Club.

Rolly: I became interested in building model planes when I was around 10 years old. Rubber-powered models is where I started, and then I took up control-line flying. I purchased my first RC plane while still in high school. This included a single-channel Babcock receiver, and the transmitter had vacuum tubes. The rudder and elevator actuator was run by a rubberband- powered escapement. The plane was a Hal de Bolt “Livewire Champion,” and it was powered with a K&B .15 glow engine. Lloyd Shales provided me with the required flight training, and it wasn’t too long and I was able to fly it on my own. More people became interested in the hobby when proportional radio control systems became available. We were a group of six individuals who formed the “Kingston Radio Control Modellers” (KRCM) club. We often flew at one of our local airports. After flying at the airports for a couple of years, it became apparent that flying RC models did not mix well with full-scale  aircraft, and it was decided that we should look for another location to fly our planes. In the mid-1960s, we were lucky to find property suitable for our needs and arranged for the purchase of our new flying field. Buying this property was the best thing we ever did! In the mid-’70s we held our first KRCM Father’s Day Fun Fly and have continued to do so each and every year since then. For the past several years we have also hosted an annual electric event as well as an IMAA Chapter 217 giant-scale event. Our club membership has grown and is typically between 90 to 100 members. I look forward to going to the flying field to put up a flight and chat with my flying buddies!

Your love of RC has also passed on to your entire family. Please tell us about your extended family and friends from both sides of the border.

Rolly: While employed in Connecticut, my wife, Marion, and I became parents of two sons and later a daughter—Kevin, Michael and Heidi. I was very active in the RC Club of Connecticut and became friends with many of the club members: Frank and  Dave Baron, Jim Feather, Mac Taylor and Dick Griffith, to name a few. After relocating in Kingston, Ontario, Rob Francis and I took part in a fun fly hosted by the Valley R/C Model Club in Sayre, PA. At this funfly event, Dan Luchaco suggested that we stage a similar event so that their club could take part in a fun fly at our field. Our KRCM Father’s Day Fun Fly was born! For the past 35 years, we have been attending each other’s event. Kevin has relocated to Connecticut, and Mike resides here in Kingston. Both Kevin and Mike continue to be very active in the hobby, and we attend many flying events together during the year that take us as far away as the Joe Nall event in SC.

More than once I’ve been asked, “Who’s that guy flying? He’s amazing!” Tell us about your models and your love for funfly competition.

Rolly: I always enjoyed flying in competitive events. I built and flew a large variety of aircraft over the years and enjoyed flying them all. The ones that come to mind are  the Astro Hog (the original), Taurus, De Bolt Jenny, Trainermaster, Minimaster, Florio Flyer, Menace, Minus and the Turnbuckle. The last four on the list are what I consider good fun-fly planes. They are very agile and behave well in flight with no bad habits. Within our fun-fly circuit, most of the pilots will have one of these planes in their arsenal. It is fun trying to better your opponent’s score by attacking the task with a little different approach. I found out in the last few years that the younger pilots, Kevin and Mike included, are pushing me further down in the standings. It’s their turn! I believe that this type of flying vastly improves the flying skills of every pilot. For the beginner, you need not get up tight. The most important thing is to participate and give it an honest try. I believe you will have fun and enjoy it.

Rolly, you recently got yourself a new laser cutter. Can you tell us about the models you’re producing, and why you’re doing this?

Rolly: I still enjoy scratch-building my models. I use a CAD (computer aided drawing) program for producing the drawing files, and I print them out on a plotter. I then cut out the pieces, contact-cement them to the balsa and cut out each piece. This process works fine, but it is time-consuming, and there’s usually some variation in the individual pieces. After learning that someone locally has a laser cutter, I started taking my files to him to have the pieces laser-cut on his machine. The only problem is that if I made an error in the drawing, it took a couple of trips and more pieces of balsa to get everything sorted out. After about half a year, I thought I should look into getting a laser cutter of my own. With my wife’s blessing, I purchased a machine and now have it set up in my basement. I did not intend to go into business manufacturing kits but use it to replace the plotter, contact cement and band saw. An almost-ready-to-fly Turnbuckle was available from Steve Luchaco; however, kits weren’t available at the time. Because it’s such a fine-working airplane, I asked Steve if he’d mind me trying my hand at cutting out the parts on my laser cutter so that the Turnbuckle could again be available. He said no problem. I have to give credit to Steve and Skipp and Scott Turner for allowing me to use their designs. A smaller version, a “MiniBuckle,” is now available with thanks going to Jim Champion. I do not want to become a slave to this laser  machine. Hopefully, I don’t forget that! I still want to go to the flying field and enjoy the company of my flying buddies!

Rolly, do you have any advice for the next generation of RC pilots?

Rolly: My advice to the next generation of RC pilots is do not try to learn to fly on your own! It is most important that newcomers locate a club, or individual, in their local area that will provide the necessary flight instruction required to be able to fly their plane safely on their own. I highly recommend joining the AMA (Academy of Model Aeronautics) or MAAC (Model Aeronautics Association of Canada) before commencing with any RC flight training.

Years ago, as a young man, I was stationed in Kingston with the Canadian Army, and in my spare time I was lucky enough to find the local RC club’s flying field. Rolly Siemonsen and the entire Kingston RC club membership welcomed me with open arms, and the fun I experienced was something special. Here with these guys, with so many interests in scale, sport and competition fun-flying events, I can honestly say my pilot skills were honed and sharpened. I thank Rolly for his guidance; he has helped several generations of young RC pilots. I had a chance to sit and talk with Rolly recently, and here’s his backstory.