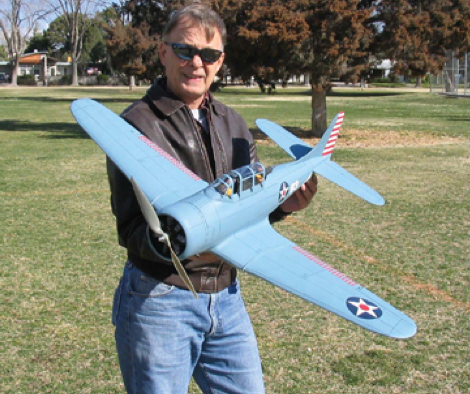 Often referred to as •Slow But Deadly,• the Douglas SBD Dauntless was the U.S. Navy’s frontline dive-bomber from 1939 through 1944. Considered obsolete at the time it entered regular service, the Dauntless nonetheless went on to sink more Japanese ships than any other U.S. aircraft. Heavily armed with up to two forward-facing and two rearward-facing machine guns, a centerline 1,000-pound bomb and two, 250-pound wing-mounted bombs or depth charges, this aircraft became quite a formidable weapon in the South Pacific. Because nearly 6,000 of them were built, including the U.S. Army Air Corps’ A-24 variant, there is no shortage of colorful schemes to model.

My modeling friend Jim Best asked me to design a Dauntless that would fit with my •Warbird Series• of models, all of which are powered by the inexpensive Magnetic Mayhem Reverse (MMR) motor from Great Planes and the Master Airscrew 3.5:1 gearbox. The model is almost exactly 1/12 scale, and Jim built the one pictured in this article. His version uses an AstroFlight brushless 020 geared motor, but the MMR works just as well. Let’s get building!