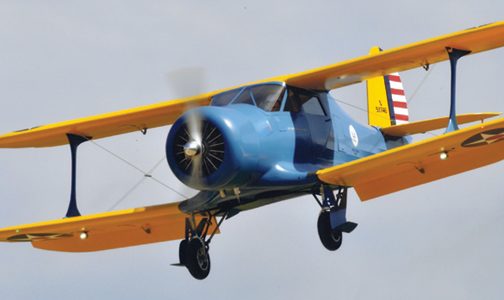 Tim Cardin’s operating landing lights are beautiful on the Beechcraft Staggerwing he built from Ziroli plans. Since then, Tim has installed them on a P-47 and they could be modified and applied to almost any World War II aircraft. The exact lights that Tim used for this aircraft are now only available out of Europe. However, I’ve found that it could easily be adapted from a number of high-intensity LED lights that are available here in the U.S. from other RC manufacturers. LED lights that are available for RC car headlights or truck off-road light bars fit the bill perfectly for this type of adaptation. The key point here is to get high-intensity LED lights so they are easily seen during the day. If you are going to add that added scale detail of lights to aircraft, they should be able to be noticed either day or night. Enjoy!

I picked up this LED high-intensity 22mm light from Mars480.com to use for my retractable landing lights. First order of business was to disassemble the light in order to modify the housing. I cut the back end off and fashioned a new end from aircraft plywood. I also drilled and tapped a 4-40 mounting hole in the housing so it could be attached the retract assembly.

Here is the entire assembly. The light is reassembled with the new back end in place. The mounting panel is from .030″ fiberglass sheet. Brass tubing was used to make the rotating shaft and again for the shaft bushings. The bushings were epoxied to 3/32″ aircraft ply and then to the fiberglass to provide the spacing needed. Small pieces of ply glued to the fiberglass keep the assembly centered. The servo mount is also epoxied in place. A 2-56 rod threaded and soldered into the shaft makes the lever and a 2-56 rod with a ball link provides the connection to the servo arm. Small bends in the lever and drive rods get the geometry just right for smooth operation.

I drilled holes through the back of the servo mount into the arms the servo screws into and CA glued toothpicks to reinforce the structure of the servo mount. The mount was then epoxied to the fiberglass. There’s not a lot of load, but it makes the servo mount very strong and is typical of any small structures I make. Due to the close rib spacing on the Staggerwing, I needed to use two rib bays for the assembly even using the mini servo.

I mounted a micro switch to the rib so when the servo arm lowers the light, it actuates the switch near the end of travel turning the light on as it finishes lowering.

Here is the retractable landing light I made for my P-47. On this application I used the piece of sheeting cut from the wing for the assembly. Wider rib spacing made things a bit easier on this one. A micro switch mounted inside the wing also provides the on/off action as the light finishes lowering.

It was slightly overcast when this picture was taken, but these lights are bright enough to be seen on the brightest days. When lowered, there is a slight stagger as they turn on and even the avoidance lights are exceptionally bright. Occasionally, they are mistaken for landing lights — at least until I lower the formal landing lights.