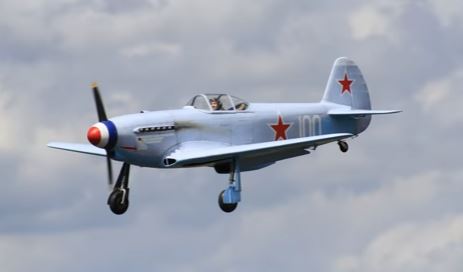 This video comes to us from our UK friends Dean and Pete Coxon, who filmed these two Yaks at a recent LMA meet in Tibenham, Norfolk. They write, “The pilots Mike Booth (Yak-3) and John Horne (Yak-11) formed their two-man ‘Red Stars’ display team late last year and this is their first public flight. [When] the Yak 3 had [landing gear] issues, John and his Yak-11 carried on with the display alone.” The Yak-11 (pictured) has a sleek cowl with an inline engine and features built-up construction and is powered by a 3W 150cc inline twin spinning a 32×12 prop.