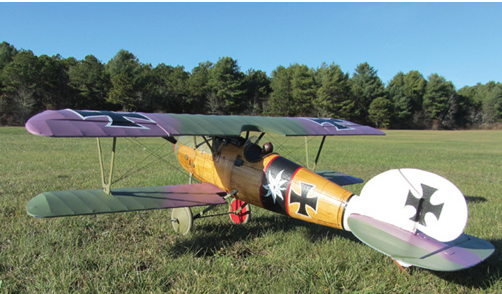 I’ve had the ParkZone Albatros for a few months and have had a blast flying it. It is a foam, ready-to-fly WW I flyer that’s of great value. My club has a grass field that is rather bumpy, so great care is needed to bring small-scale planes down for safe landings. It was this objective that inspired my modifications to an already good model. I decided to make new wings using the traditional balsa and covering method to lighten the plane a bit, new landing gear that include a suspension for those potholes, and a new paint job just for fun.

STEP 1: The stock fuselage color of the Albatros is a perfect base color for graining or “faux finishing” the fuselage. This was accomplished using matte medium and burnt umber acrylic paint.

STEP 2: Each panel was grained going a different direction to simulate woodgrain.

STEP 3: The stock landing gear lasted about a month before succumbing to numerous potholes and bumps in my club’s runway. The original gear’s metal was a trifle brittle and cracked in several spots. Rather than getting in line for a backordered set of new gear, I decided to simply bend up and solder a new strut structure using good old piano wire.

STEP 4: Since I went to the trouble of making new struts, I decided to make a suspension by soldering an axle at its midpoint to the spreader bar; each end will then get set up with elastic cord to give the effect of bungees on the real plane. The fuselage was then grained to simulate panels of plywood.

STEP 5: The wings were built using notched leading and trailing edges that I made by pinning them together and notching on a small table saw. If you don’t have one of these, a razor saw works well too. Inset: The wing ribs were made by stacking a pile of blanks together, spot tacking the ends with some CA, and then shaping them as a unit. I then cut off the ends, therefore freeing the individual parts.

STEP 6: The result was an interlocking structure that can be dry-fitted together, and then fastened using thin CA.

STEP 7: These are the almost-finished bottom wings, to which I gave about 1/2 inch of dihedral. Special attention was needed to make the center section fit the opening in the foam fuselage perfectly.

STEP 8: The top wings were made in the same way.

STEP 9: Plywood interplane formers were made with tabs that extend to accept the V-shaped interplane struts. These were epoxied into place.

STEP 10: The bottom wing was then mated to the fuselage and a small fairing was built up using scrap balsa. This was then sanded to blend it into the fuselage.

STEP 11: The bottom wings, top wings, and interplane struts were pinned in place to check their fit. A foam-core jig was fitted between the machine guns to give proper angle of incidence for the top wing.

STEP 12: Interplane struts were made from basswood that I reinforced at the joint using plywood plates, and temporarily clipped in place to check alignment. The wings were then disassembled for servo installation and covering.

STEP 13: Servos have been installed along with the Y-harness. Both wings and ailerons are ready for covering.

STEP 14: I used Microlite covering on the wings — cream on the undersides and dark green on the tops.

STEP 15: I used light blue Krylon spray for the undersides of wings and stab, and green and “German Mauve” acrylic model paint on the tops. The ailerons were then hinged using CA hinges and installed. Aileron horns were re-used and then both wings were attached to the fuselage.

STEP 16: I cemented basswood fairings to the landing gear struts, then wrapped them with some scrap covering film. Rubber band “bungees” were added to the gear to complete the working suspension. The propeller and tailskid have been painted with a basecoat of medium brown in preparation for graining.

STEP 17: The engine was sprayed with acrylic aluminum paint, then given a “wash” of thinned black paint to enhance the details. The exhaust stacks and pipe will be painted a rust color.

STEP 18: The pilot was given a new paint job using leather brown, cream, and various acrylic glazes to enhance details.

STEP 19: Here, the model is almost finished. Interplane struts have been fastened using small machine screws and the paint job is just about complete.

STEP 20: A radiator pipe made from aluminum tubing was added to the front of the engine leading up to the radiator in the wing. Rigging has also been added.

STEP 21: A close-up shot of the faux grained propeller and the Garuda Feldpropeller logo.

CONCLUSION
The ParkZone Albatros DVa ARF is a great WW I foamie that will fly well right out of the box. I personalized it by lightening it and reworked the landing gear to include a suspension for bumpy runways. Making the foam look like wood was especially satisfying. Choose a particular paint scheme that you like and modify accordingly; it’s loads of fun and makes your plane unique!