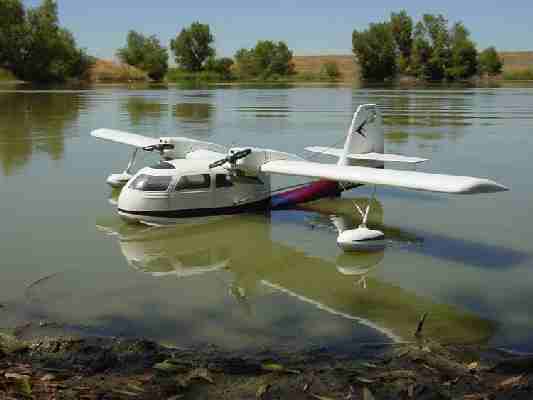 The somewhat odd looking Republic Seabee has always been one of my favorite aircraft. The four-passenger Seabee, built by the Republic Aircraft Corp, was introduced after WWII and became known as a 90 knot plane. It took off, cruised and landed at 90 knots and was considered to be underpowered. 23 Seabees were turned into Twin Bees (UC-1) by the United Consultants Corporation (later named STOL Aircraft) in Norwood, Massachusetts. In addition to the engine swaps, the conversion consisted of lengthening the fuselage, adding a fifth seat and increasing the wingspan. The twin engines really made the airplane come alive.

G&P Sales offers a 72in. wingspan scale Seabee model with a fiberglass fuselage and foam wings. Bill Price is the man behind G&P and has been manufacturing kits since 1988. He specializes in seaplanes but also offers some other cool models like the Tigercat (rcairplane.net). The Seabee can be ordered in its original single engine pusher configuration and the Twin Bee version. Both kits are identical with the exception of the wing and include a lightweight fiberglass fuselage, cowls and nacelles, foam cores and all the balsa and ply. In addition, a one-piece windshield “bubble” and most of the hardware are also included. A detailed instruction book and a full-size plan will help you get in the air fast. A worthwhile option is the build and flying video which is a good building aid. As the Twin Bee flies better than the single-engine and I am a fan of twins, I chose to build the Twin Bee. Available separately, is a simple and strong retract system for the main gear. You can build the model strictly as a seaplane without the retracts, but I think it is cool to be able to taxi into the water, retract the gear and then takeoff. Besides, the full-size was an amphibian.

I plan on using a pair of Evolution .36 engine which may a bit overkill since Bill flies his with a pair of K&B .20 Sportsters. I have found Evolution engines to be very reliable as long as you use Evolution glow plugs. If you plan on going electric, I believe Bill will cut the cores so that the engines are farther out from the fuselage to allow for the bigger props for the electric motors. I also plan on installing a Sullivan remote glow driver for twins to get a reliable idle.

The Twin Bee is very close to scale with a few deviations to improve its flying characteristics.

Before I started construction, I reviewed the plans, instructions and video. Bill has made improvement to the kits over the years and sometimes the instructions haven’t caught up.  By studying the plans and actual parts it’s easy to figure out the construction process. The video and instructions have a lot of good tips so the time spent reviewing them is well worth it.

The fuselage is made out of a fiberglass mat which results in a strong and light structure that requires little in the way of preparation. It would be time consuming and require considerable craftsmanship to duplicate this structure in traditional balsa.

I began construction with the wing top sheeting. First the top sheet is fabricated by gluing two sheets of 1/16 in. balsa together and sanded flat. A spray adhesive was used and I checked to make sure it didn’t eat the foam. A thick layer is not needed but complete coverage is. The wing has built in washout which is achieved by placing a shim under the outboard trailing edge of the foam core while the top sheeting is pressed on. This is shown clearly in the instructions and video.

Now is a good time to make a template or map of the dowel locations and aileron cutout so that they can be found after the bottom sheet is added (shown in a later photo). Note the channels precut into the foam for the aileron and throttle servo extensions which are laid in place before sheeting. Also, note that there is no spar as the wing struts are functional eliminating their need.

After the bottom sheeting is secured the balsa leading and trailing edges were added. On the Twin Bee the leading edges are cut to accommodate the engine mount. Epoxy was used and they were held in place by rubber bands until they cured.

The firewall has tabs which are locked between the leading edge and foam.

The previously made map is used to locate the aileron servo cutout and dowel locations. The one inch hardwood dowels are for the float strut and wing strut.

The ailerons are cut out after measuring and marking their locations. Then balsa sheeting is used to surface the cut sections.

These are some of the tools I use for carving and sanding. For the leading edge I like to use a carving knife initially followed by a hobby plane to get the approximate shape. I then use 60 grit-sandpaper on a long “T” bar sander to get the final shape. I follow that with 120-grit paper, again on a long “T” bar and also sand the sheeting to get it even with no protrusions. Since I plan on fiberglassing the wing there is no need to sand any finer than 220 grit.

A balsa block is supplied for the tips. The wing tip pattern was photocopied from the plans and used as a template to cut the block slightly oversized on a scroll saw before gluing it on. Then it was carved and sanded to shape.

I prefer to add a 1/8 in. lite ply square to reinforce the control horn area. Now is a good time to hinge the ailerons. A Dubro hinge slotting tool was used to cut the slots just below the sheeting. The hinges will be permanently installed after painting.

Each aileron is operated by its own hidden servo. The hatch is constructed from plywood and pine aileron servo mounting blocks. The servo screws are hardened with thin CA after drilling the holes. If you prefer, a single servo and Nyrods can be used and the instructions how you how to do this.

The fiberglass floats already have the strut wire glued in place. Holes are drilled into the wing dowels for the float strut. I used a drill guide to ensure they were perpendicular to the wing. An eyelet is soldered onto the support strut and screwed to the other dowel in the wing. The wing acts as jig to solder the support strut to the main strut.

A heavy duty soldering iron and silver solder was used to solder the joint which was wrapped with copper wire. The joint will be covered by streamline tubing later, so it need not look perfect but it must be soldered properly.

The plywood sidewalls have been added along with the cowl and nacelle mounting blocks. The other two blocks are for the Hitec mini servo for the throttle. I reinforced the firewall with some triangular balsa stock.

Shown is one of the cowls trimmed for the engine and the other as received.  A Dremel tool makes it easy.

After the cowl is roughly trimmed to size, I used it locate the engine mount on the firewall by centering the engine in the front opening.

The Hayes 30-size engine mount is attached to the firewall with 4-40 bolts and blind nuts.

The fiberglass nacelles require some trimming. One nacelle is shown trimmed.

The wing halves are joined with 30-minute epoxy after making sure the joint mates well. I placed a 1 ½ in. block under each wingtip to get the required dihedral. This is no place to skimp on the epoxy – make sure the dihedral brace and wing roots are coated in epoxy and let it cure undisturbed.

Concurrently while working on the wing I started the fuselage construction. I cut out the windows along the embossed lines first to help gain access to the fuselage. A Dremel with a cutoff wheel works well.

The retracts are installed by drilling holes in the fuselage for the axels at the marked location. The brass axel bushings are glued into the blocks and a top piece added. Then it is wrapped in thread and saturated with CA. For gluing in the various ply and pine blocks I used Zap Goo which bond well to the fiberglass. I will follow up later by gluing strips of fiberglass to the joints with 30 minute epoxy.

The retracts are assembled per the instruction manual. After assembly,  the upper crosspiece is positioned for the proper distance and temporarily hot glued in place. Then when the retract operation is satisfactory, the mounting plates are permanently glued in place. The cross piece is held by screws so that it can be removed to better access the servos, etc.

A hatch slightly larger than the one in. tailwheel mounting block is cut out in the aft section of the fuselage.

The one in. block is glued to the hatch which was cut out from the fuselage. A 1/8 in. plywood hatch mounting plate is cut out and glued to the inside of the fuselage and glassed in place. Although not absolutely necessary, a drill press insures that the tailwheel axel will be straight.

I used Zap Goo to glue in the plywood wing bolt mounting plate.