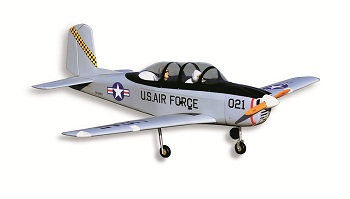 The Beechcraft T-34 Mentor was designed in 1948 as a more economical replacement for the AT-6/SNJ airplanes that the U.S. military used to train pilots during WWII. It was derived from the civilian Beechcraft Bonanza. The T-34 had a long and productive service life in the hands of the U.S.A.F., U.S. Navy, and Coast Guard, as well as many foreign countries. Some T-34s still remain in military service over six decades after it was first designed. Surplus T-34s have become one of the most sought after civilian warbirds because of its economical operation and fine flying qualities. Seagull Models has captured the look and performance of the T-34 Mentor in this beautiful sport scale ARF. The airframe is conventional built balsa and plywood construction, yet modern laser-cut design allows the airplane to be kept light and strong. Suitable for glow, gas, or electric power. Includes fixed landing gear with oleo shock absorbing gear struts (the landing gear mounts are designed to fit optional electric retracts). 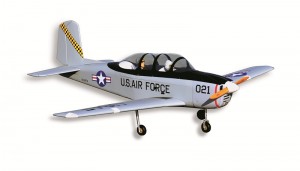