Here are three simple ways to wrangle in those wild wires floating around inside your aircraft. From left to right: cable tie available in different sizes, Velcro cable ties and just some good old-fashioned electrician’s tape. 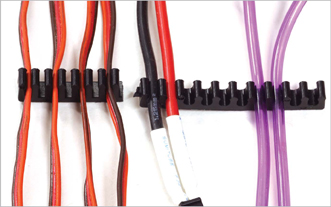 Tidy Strips, available from Model Aviation Products (modelaviationproducts.com), are perfect for cleaning up wire (and air lines) in aircraft. These strips can be cut down and glued to the side of the fuselage. The one on the left is perfect for servo wires and the one on the right is great for retract air lines or 16- to 14-gauge battery wires.

WHETHER THEY’RE ELECTRIC, glow, gas or turbine powered, one thing all planes have in common is the fact that there is wire traveling from point to point inside. These could be servo wires (from servos to receiver), power wires (from battery to ESC to motor), flight battery wires (from switch to receiver) or power wires going to electric retracts (which is what any true E-pilot would use). Add to that the fact that some 2.4GHz receivers have extra wires going out different remote antennas, and it becomes clear there’s a lot of wire inside our aircraft. No matter what you fly, there will come a point when you have to do something with all the wires going to and from things. I found that out when I decided to convert a B-17 to all electric; let me tell you, there were a ton of wires to deal with!

This month I’d like to share with you some of the things I use to wrangle in all the wires we have with any electric conversion (or any large RC aircraft).

I have had many people say to me, “Why even bother? They won’t hurt anything.” While that may be true for a while, that’s not the case in the long run. When they’re left untethered inside the aircraft, wire will bounce around and tug on the ends. This will eventually cause wear points on the plastic covering and expose the wire. This continuous movement will also weaken at points that are not moving, such as at the plug or connector’s point. I don’t know of anyone who would want a power wire breaking free during a flight. Another thing to consider is that an aircraft has limited space; those free range wires can get tangled up in moving servo arms.

The other issue people bring up is that if the wires are tied down and they crash the aircraft, the wires will get pulled out of the servo and make them completely un-useable. My advice to you on that is: don’t crash.

WHAT TO TIE UP

Basically any wire that runs through the fuselage or wing of the aircraft or anything that can move around during flight, should be tied down. For larger electrics, there are wires coming from the ESC, motor and batteries to add to all the servo wires. Planes with multiple motors will add to the crowded wire grouping and you’ll almost always have “Y”- harnesses that are much longer than they need to be. With all the “Y” harnessing I had to do, there were a lot of extra wires on my B-17. If room is tight and you have to have multiple batteries because one large one will not fit, that will add to the wire population in the fuselage. Let’s not forget charging and balancing plugs on the battery packs; they also have wires attached that need to be wrangled. Non-electric planes (glow and gas), especially as they get bigger, have a lot of wires running around in the fuselage. Our electric aircraft will have many more wires added to the mix and do require some consideration on how to keep them in line and tied down. 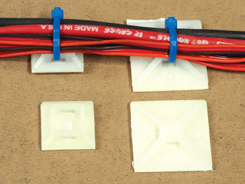 These sticky back plates use cable ties to keep bundles of wire in line. Place them wherever you need them inside the plane. I use an extra bit of epoxy around the edges to make them a permanent bond. The one on the left I pur-chased from an electrical supply store and the one on the right is from a home improvement store. 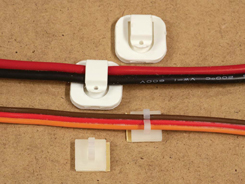 If you don’t like using cable ties, these clips make it easy to remove the wires when needed. Both are available from electric stores like Radio Shack. I use an extra bit of epoxy around the edges to make them a permanent bond. 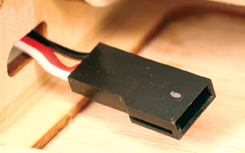 Directing plugs and wires through cutouts like this is a perfect way to keep wires under control inside the aircraft. Most new kits have similar cutouts that allow you to guide the wires around the inside of the fuselage.

My good friend and regulator contributor, Jason Benson, turned me on to expandable braided sleeve covering. This is sold through electrical outlets and stores and is perfect for keeping groups of wires together on long runs, such as dual elevator servo wires running from the back of the plane to the front. As you push through the larger plug, the material expands and contracts for a nice tight fit on the wires.

There are many ways to keep your aircraft wires in line and many of the available products for this are highlighted in the photographs throughout this article. But other methods for keeping your wires together could include something as simple as bunching them up and tying them to each other. This alone will keep the wires from flying around in the aircraft. You could us small strips of tape, wire ties, twist ties, or any other simple way to keep them together.