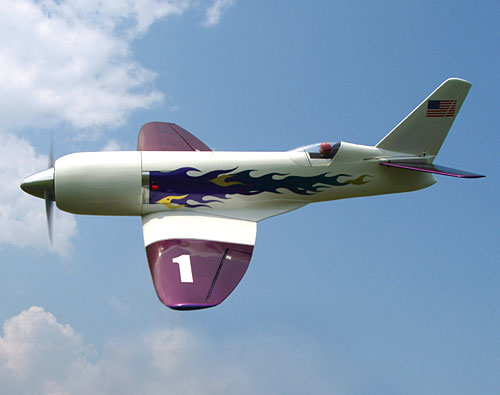 I first learned about Shockwave in an Air Classics article that had a few photos and several artist concepts of the roughly half completed full-scale unlimited racer.  The purpose of this strange airplane is an attempt to hit 600mph using a radial engine. Yes, 600mph! With Reno unlimited racers often bouncing off the 500mph mark, the leap to 600 is astounding in scope, cost, technology, and effort.

The man behind the effort is Darryl Greenamyer, who needs no introduction in the aviation world, considering his speed records in a privately owned F-104 Star Fighter and attempted 1995 rescue of the B-29 “Kee Bird” from Greenland. The project uses a Hawker Sea Fury wing with a new center section, an F-86 Sabre Jet tail with full-flying horizontal stabilizer, and a T-2 Buckeye landing gear. Add a giant 28-cylinder 5,000hp R4360 radial engine and the Shockwave was born!

Intrigued by its Gee Bee-ish shape (because of all the fuel tanks in the fuselage) and its odd collection of parts, I just couldn’t resist designing my own electric version. I figured if I kept it hand launched, and under 45-inch span, it would be light and affordable to fit out. Working with compound curved planked fuselages with elliptical wings and full-flying tails makes this model not suitable for beginners; some building experience is required.