Do you like jet aircraft models? Did you know you can fly a model of a jet without the use of a ducted fan unit or a turbine propulsion system? If this sounds good to you, welcome to the world of Slope Jets. Not many things in model aviation look as good as a Navy jet flying over the ocean or a lake, unless it’s a ground-attack jet flying over terrain, or a high altitude spy plane flying high overhead. The models you see in these photos are gliders. Yes gliders. They are unpowered model sailplanes flown in the lift created by wind blowing up a hill.

The two main types of R/C glider flying are thermal and slope. Thermal sailplanes use the  rising of air created by sunlight warming the ground to gain altitude, the same source of lift used by hawks and eagles as they circle upward without flapping their wings. Slope sailplanes fly in rising air created by wind blowing into the face of a hill and forced upward, producing lift in front of the hill or ridge. Slope lift is present when you see a gull or flock of pelicans cruise horizon-to-horizon without flapping. Models designed to fly in thermal or slope lift can stay aloft as long as battery packs and pilot stamina hold out. 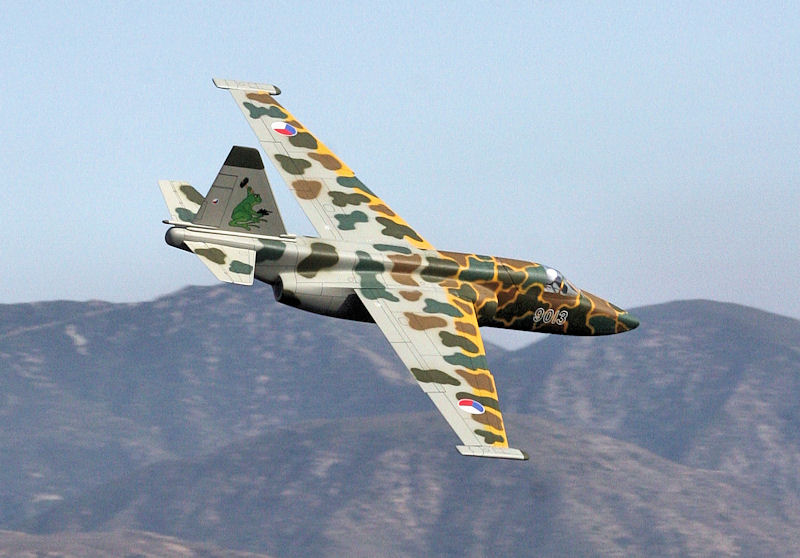 REASONS WHY WE LIKE SLOPE JETS
Slope jets have a special appeal to many of us, and I asked slope pilots why.

1. Jan Carstangen: “They just plain look different than all those P-51s, P-40s, P-63s, and that makes them stand out. The scale speeds are more realistic – jets are way better in simulating them. It’s easier to imagine a jet noise than a reciprocating engine noise when the plane hauls by you on the slope. They look way better than prop planes.”

3. Mike Gantner: “The designs are clean, low drag. Jets are crowd pleasers. For foam designers the single engine jets have a strong rear fuselage. The air show jets have great trim schemes. The bubble canopies are easy to detail and you can see the pilot figure real well.

4. Alex Paul, “From a good pilot’s perspective flying slope jets in formation allows the fliers on the line to work together, communicate, coordinate maneuvers, and strive to perform like the Blue Angels.  It sure is fun to watch when the pilots get in the groove.”

5. Joe Chovan; “Jets have no props up front, so fewer liberties are taken when building them to scale for the slope.” and “The aerobatics we do on the slope are often suggestive of several routines  performed by modern jet show teams– big, smooth and fast.”

6. Carl Maas: “No props to get in the way! They just look cool. The pilots look cool too!

There are great looking paint jobs available (civilian versions as well as military).”

7.Jack Cooper: “Slope Jets are cool because they look AWESOME in the sky.”

WHERE WE GET SLOPE JETS

We don’t see slope jet kits on the shelf at every local hobby shop, and not every online sailplane supplier stocks them. There are three basic sources for slope jets: an original design, a modification of a powered model kit, or from small specialty sailplane makers.

1. Design your own model

You hard core builders can get any jet type you want, in the size you want, modeled in the weight you want if you do it yourself. Examples of this strategy are Lynsel Miller’s English Electric Canberra, and Walter Bub’s Grumman A-6 Intruder, and Steve Savoie’s Lockheed U-2 Spyplane. Start with three-view drawings. My favorite source for 3-view drawings and photographs is Bob’s Aircraft Documentation in Costa Mesa, California

Brian Laird’s own-design, scratch built Messerschmitt Me-262 Stormbird flown at Southern California PSS Festival is but one of several in a long line of his original design model aircraft. Another is his Aerospatiale Caravelle  airliner. Probably the best known Power Scale Soaring (PSS) designer in the country today, Brian has been imagining, building, and producing highly innovative models at Slope Scale in Moreno Valley, California for nearly two decades.

Carl Maas in Corona, California is known for design and prototyping the most exotic of PSS models, including the Sukhoi Su-25 Frogfoot, Soviet Bloc counterpart to the NATO Fairchild A-10 Warthog, and a huge Boeing B-29 Superfortress that carries and drops a Bell X-15 rocket plane.

If you are a sailplane designer and PSS jet lover, you know who you are.

For experienced slope builders, conversion from a fuel-power kit presents possibilities.  Bob Powers’ McDonnell Douglas F-4 Phantom is an example. The plane sat built but unflown as a powered model and Bob decided to pull off the fixed landing gear and add a nose cone where the engine used to go, and throw it off a hill. While it looked mighty cool, it didn’t fly terribly well, requiring massive lift, and rolling poorly as the ailerons were small. Something to keep in mind for the next conversion.

Another example is my own Douglas A-4 Skyhawk converted from a Yellow Aircraft ducted fan kit. Working to keep it light,  I closed up the retractable landing gear bays and extended the ailerons to the full span of each wing half.  While it looked pretty good in the air, it was too light for good performance and the ailerons were too sensitive for me during the early flights.

Dave Arnold flew a Mikoyan-Gurevich MiG-21 “Fishbed” at the 2009 PSS Festival, a slope jet converted from a balsa ARF power model kit. Good model airplane design, especially scale model design, is harder than it looks, so  support our designers who have painstakingly worked out the designs, tested them, and produced kits so we can just build and fly.

A great option is to purchase a kit from one of the slope specialty makers. You may have to hunt a little for a slope jet or other PSS model that pleases you, but at least the design and testing work has been completed.

Jeff Fukushima in Monterey Park, California, is one of the guys I’m happy to have designing models for us. I especially like his Grumman F9F Panther, and I look forward to new designs Jeff keeps showing us at the SoCal PSS Festival.

Whether you design your own, modify a powered model, or purchase a kit, when in the air your slope jet is sure to attract attention and draw questions.

Those with photo credits not mentioned were taken by Dave Garwood 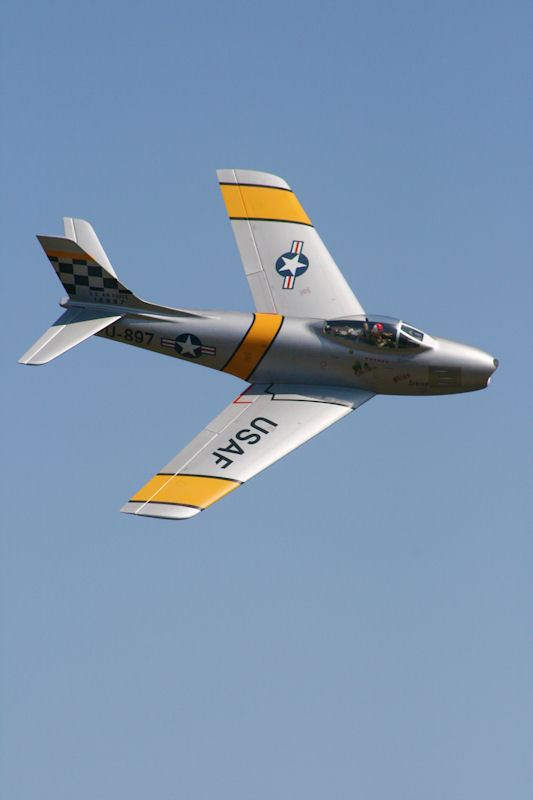 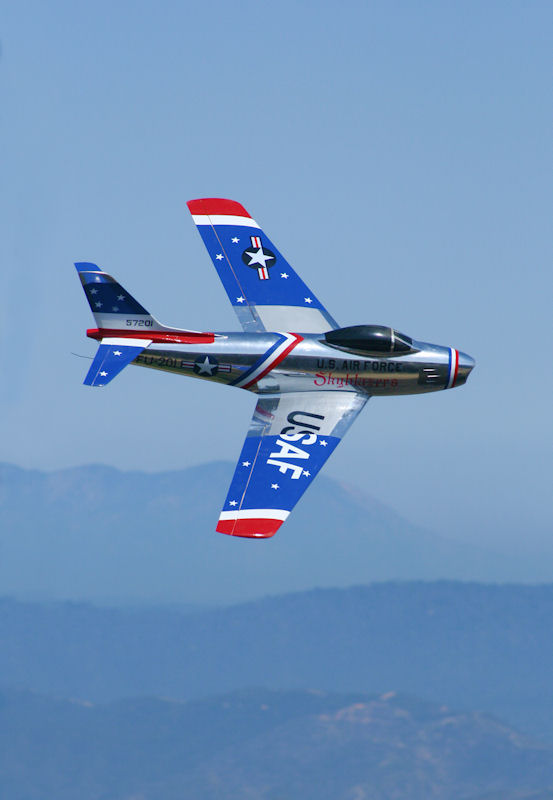 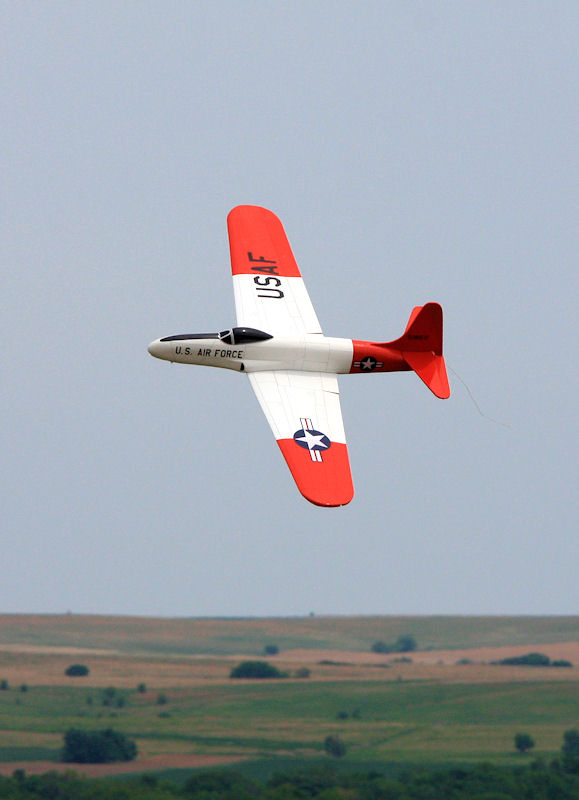 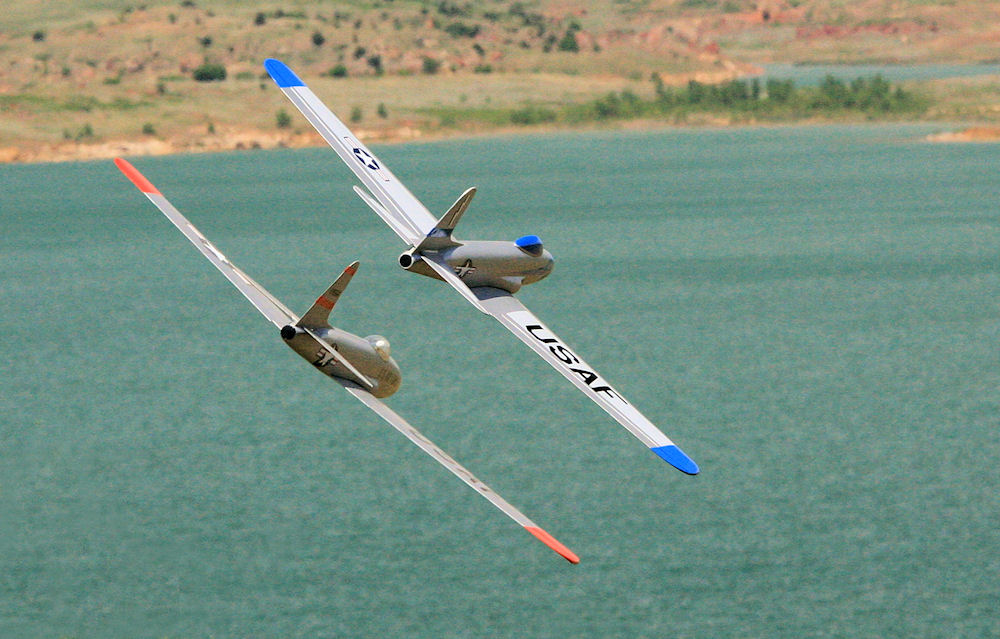 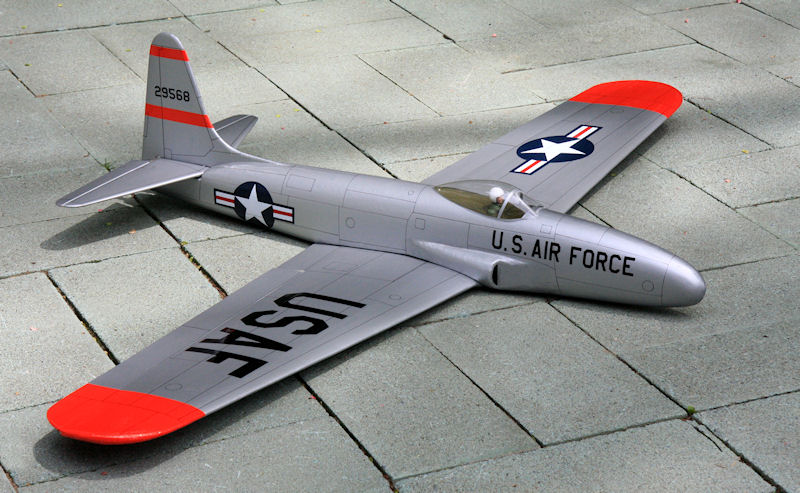 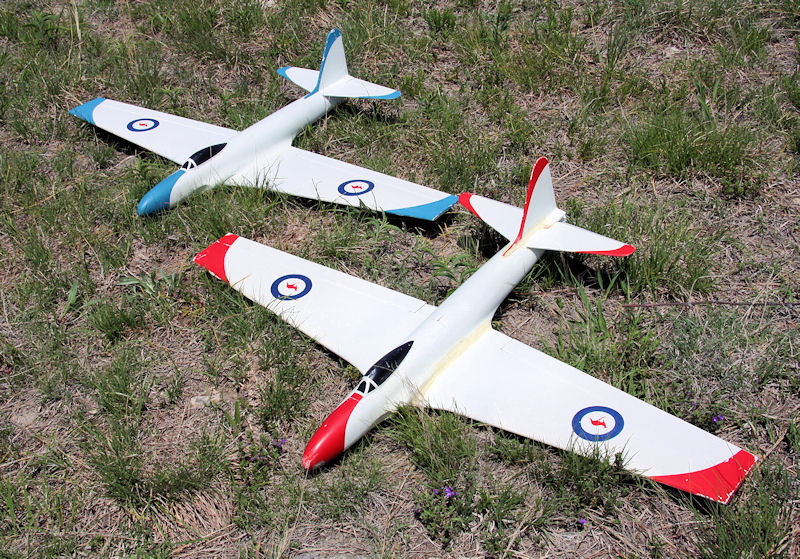 Slope scale 48-inch span Lockheed P-80 Shooting Stars, build from molded fiberglass fuselages and foam-core, balsa-sheeted wings covered with Solartex and painted. Joe Chovan built both of these planes in order to have matched flight characteristics for flying together. 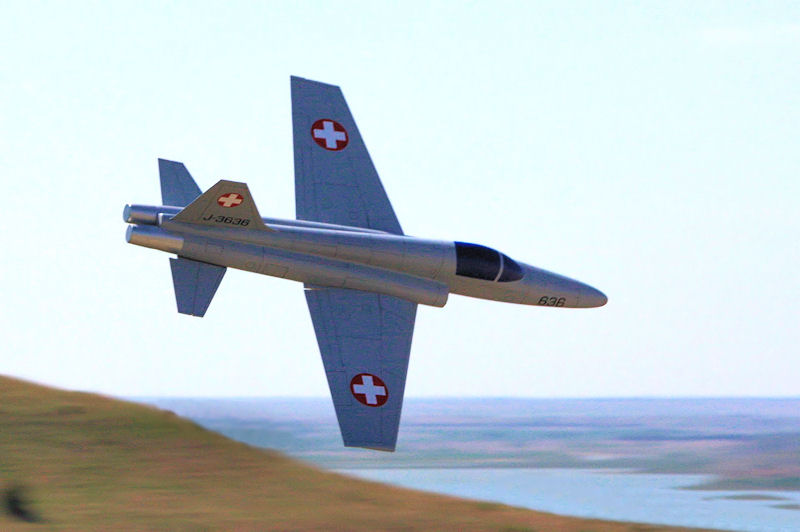 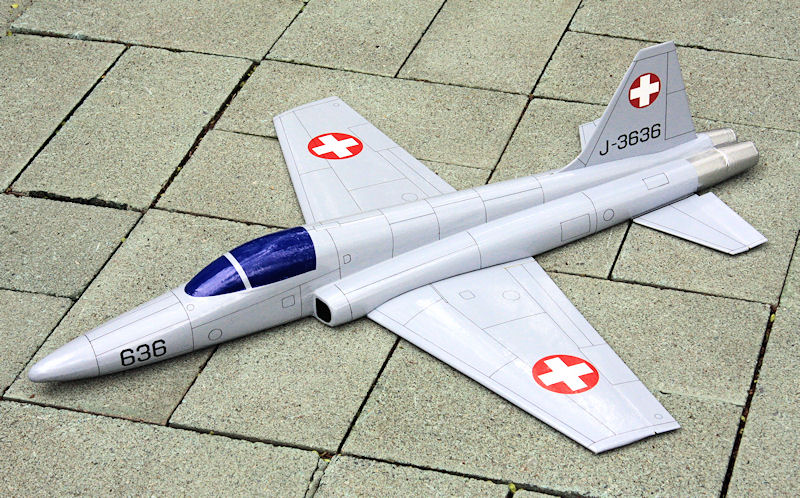 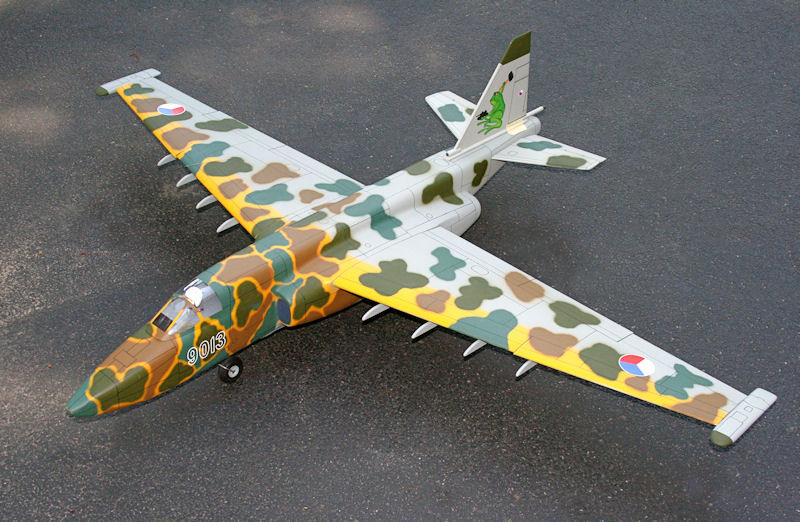 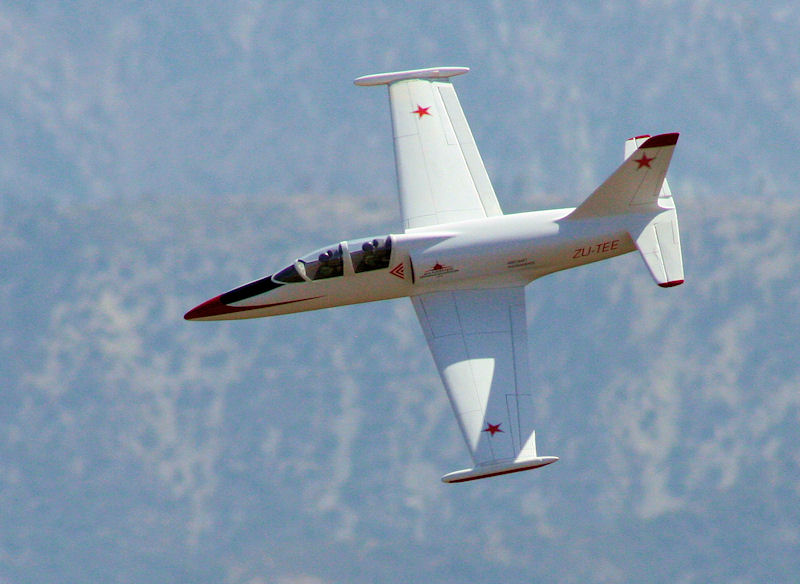 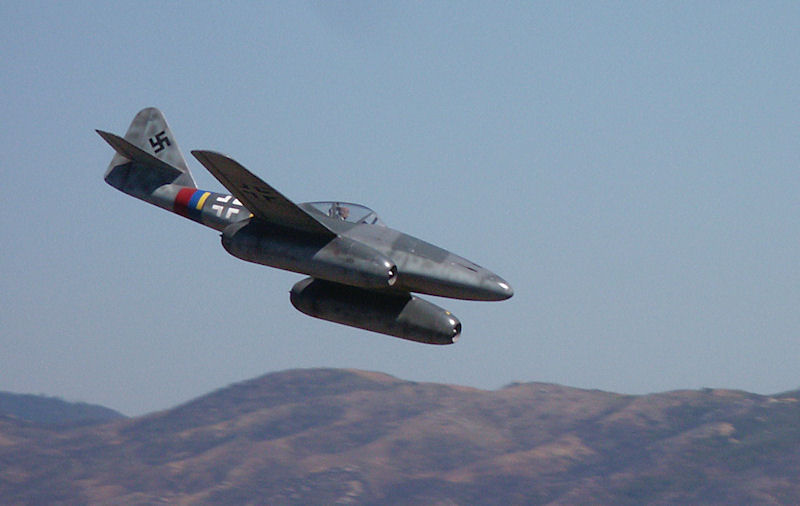 Messerschmitt Me 262 Schwalbe (“Swallow”) an original design built and flown by Brian Laird at several PSS Festivals. It has a fiberglass fuselage and nacelles, balsa sheeted foam wing. Photographed at PSS Festival by Joe Chovan. 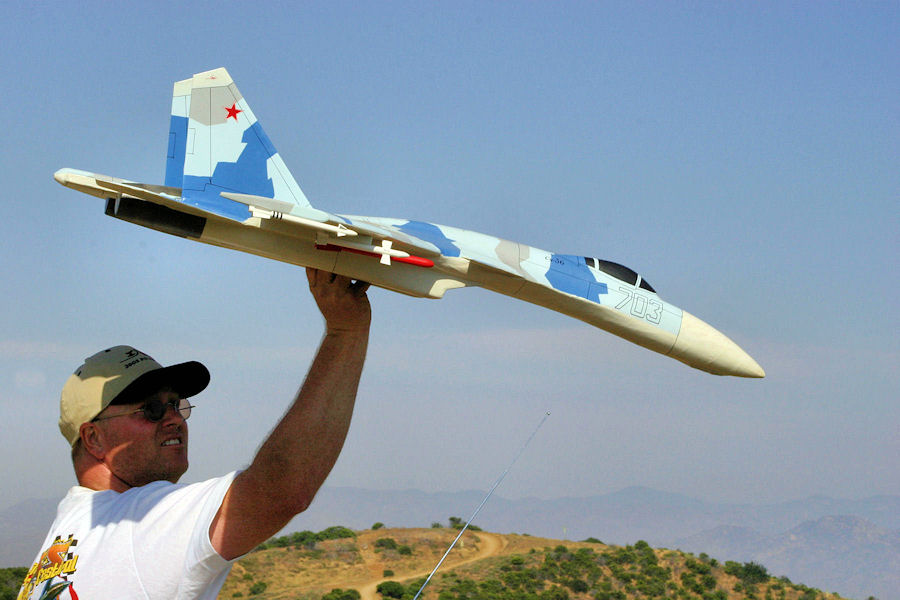 Sukhoi Su-27 Flanker, and original design by Brian Koesler. the Flanker is built from EPP Foam and covered with Solartex. Photographed just before a launch at the Spring PSS festival by Brian Laird.