If you have ever been to an RC airshow, then you’ve seen aerobatic airplanes using smoke during their flight routines. When used properly, smoke systems can add a great deal to your flight presentation. The uniqueness it gives to specific segments of your flight routine will increase their appeal and pizzazz to both the spectators and your fellow pilots alike.

MAN contributor and expert aerobatic pilot and national champion John Glezellis give us an up-close look at installing a smoke system properly for consistent performance.

Today, many commercially-available smoke systems use a separate battery source to control the smoke pump unit. I recommend these types as they don’t draw current from your receiver battery, and the volume of smoke that is produced can be easily controlled via your computer radio. While I have not used all of the smoke systems that are commercially available, I have tested and have successfully used several of them over the years. 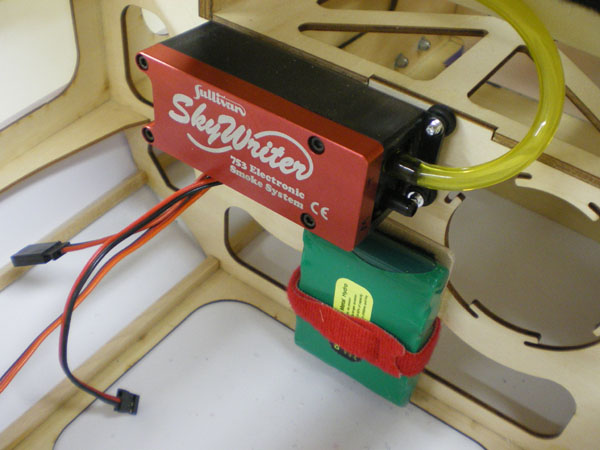 My personal favorites include the SmartSmoker from Tajera Microsystems Engineering, Inc. (TMJ), and the Skywriter from Sullivan shown above. Other popular manufacturers include 3W and Slimline, and while I have not personally used these pumps, I know they work equally as well. 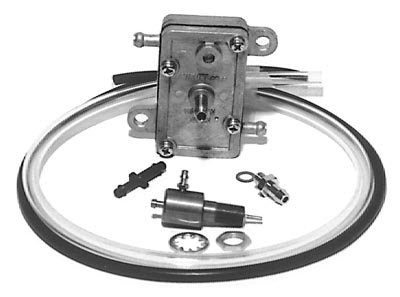 Another popular smoke system is an older product but it still works great and doesn’t have a electrically driven pump. It is the B&B Specialties Smoke Pumper. This high volume smoke system contains the Pump, BB Control Valve, hose and all fittings for easy installation. The Super Smoke Pumper does not include the smoke generating muffler or smoke fuel tank. The heart of the BB Smoke System is, of course, the pumper which operates on engine crankcase pulsing pressure. No need to worry about a ruptured smoke fuel tank filling the inside of the fuselage with fluid. The smoke fuel tank is not pressurized. It is a surefire way of moving fluid from the smoke tank to your smoke generating muffler. Simple and effective.

If you are using a smoke pump such as the SmartSmoker or the Skywriter, you will need to gather the following materials:

Some pilots will be using the same aerobatic airplane for IMAC (sequence competition) as they use for their freestyle competition. Since smoke isn’t needed for IMAC routines, making a removable tray to support the smoke tank, pump, and pump battery, is a simple and quick way to save a pound or more in weight. If your model is a tad on the heavy side, give this idea some thought. 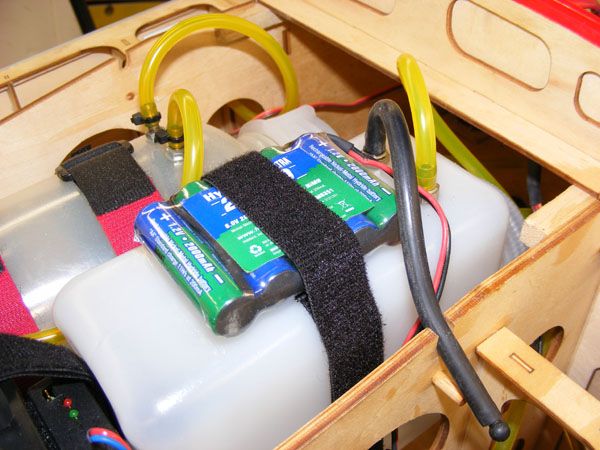 Start by installing the smoke tank. If there’s room, I always prefer to mount my fuel tank and smoke tank together in an area very close to the airplane’s Center of Gravity. This way as fuel and smoke fluid is depleted the model’s CG will remain unchanged throughout the flight. If your fuel tank and smoke tank are located in the front of the model, you’ll find that your model is nose heavy at the start of the flight and as the flight progresses, you’ll have to change elevator trim as the model becomes more and more tail heavy.

I run three lines out of the smoke tank. One line simply vents to the outside of the aircraft on the bottom of the model, the second attaches to the smoke pump (the internal line is attached to the clunk), and a third line that is used for filling the tank and is attached to a fuel dot. I also prefer to mount my pump close to the smoke tank, and close to the tank’s height within the airframe. I also make the smoke battery removable. I use a 2000mAh NiMH battery, but with such a small current draw, a 500mAh battery could be used and will provide about 30-minutes of smoke-on time. 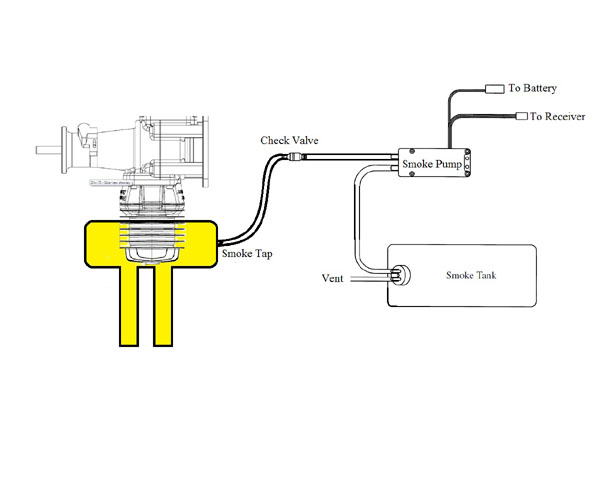 With a smoke pump like that from TME and Sullivan, you will notice that two servo leads come out of the pump. One is connected to the battery and the second lead plugs into a spare channel port in the receiver. 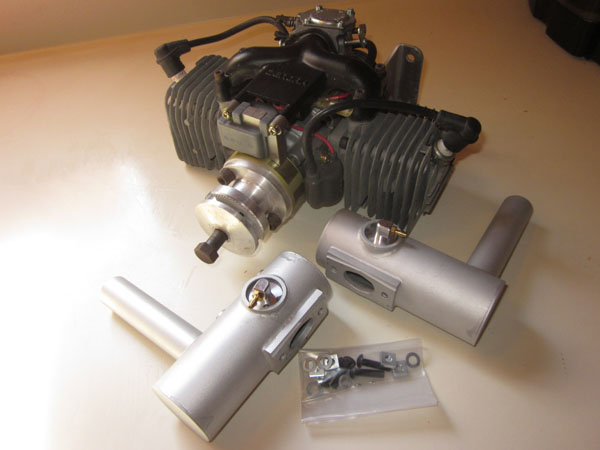 While using a twin-cylinder engine with two mufflers, Like this Zenoah GT 80 and Slimline Smoke Mufflers shown above, the smoke system needs a T-fitting to supply fluid to both mufflers. I attach Neoprene line from the “T” Fitting to each exhaust header (via a threaded pressure tap,) that I further secure to the header using JB Weld. I use gasoline tubing from the pump to a “T” fitting and Neoprene line after the T-fitting. Neoprene withstands heat much better than standard gasoline line. A check valve helps prevent muffler pressure pushing fluid backwards through the smoke pump during periods where the smoke system is off. The check valve is located between the tank and the T-fitting. 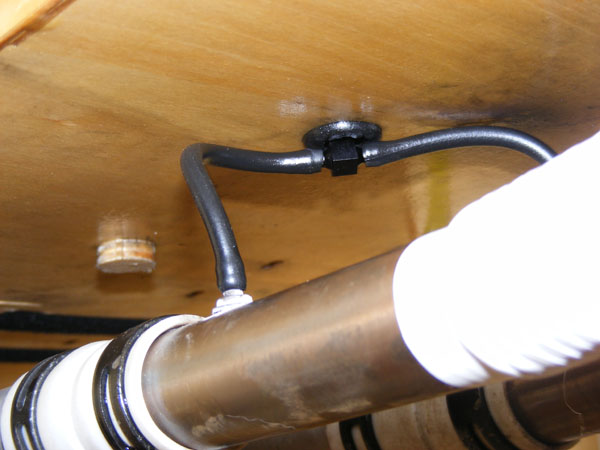 If you feel that simply assigning your smoke pump to operate on a switch at one standard speed is acceptable, think again! When smoke is injected into the model’s muffler or exhaust system, it is critical to change the volume of fluid being pumped. If too much oil is injected into the muffler while the throttle is at a low setting, it can kill the engine. Not good for a maneuver like a spin with smoke on. 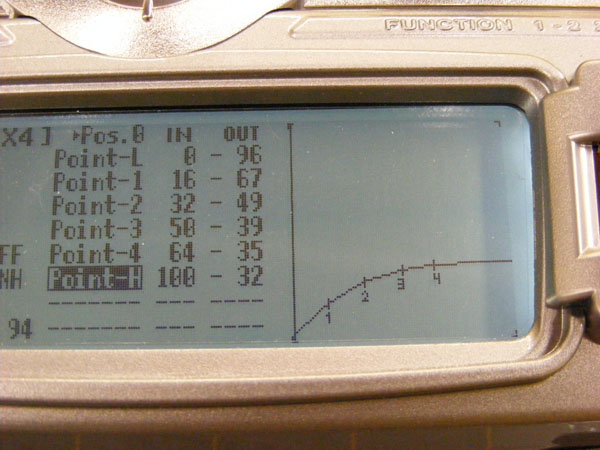 Above, Now, it is important to utilize a Curve Mix to ensure that the smoke pump is off when the throttle stick is at idle, and the pump gradually increases in speed as the throttle is advanced. In addition to using a Mix, you can also decrease the smoke pump rate by using your ATV screen. Here, we have decreased the speed, when activated, to 50%. Find the proper balance by using both the Mix, and the ATV screen, to find the optimal rate.

For my airplanes, I plug the smoke pump into a spare channel and assign it to a switch. For example, let’s say that I have Aux 4 as a free port on my receiver. In this case, I’ll assign Aux 4 to the Mix Switch on my transmitter. Then, I will utilize one of the programmable mixes to mix Throttle (the master channel) to Aux 4 (the slave channel). I then assign this mix to the switch (Gear Switch), and program different points on my mix graph (using a mix curve,) for different pump speeds to operate at in relation to the throttle setting. For example, at idle, I want the pump to barely operate so that little to no smoke fluid is pumped into the exhaust. As I increase the throttle, the smoke pump increases the flow. Using both the Adjustable Travel Volume screen and the Mix function can change the rate at which the pump operates at its fullest potential. Remember, though, the curve mix is critical!

When programming the smoke volume, you can make most adjustments on the ground. For maximum power, though, let your engine idle for a minute or two on the ground. Then, activate your smoke pump at or close to full power. If you see a large burst of smoke initially followed by a smaller amount of smoke, decrease your smoke rate as too much oil is being used. Making fine adjustments like this will ensure that you have a reliable and impressive amount of smoke during your flights. Fine tuning the pump will also maximize your “Smoke On” time.

If you simply use your smoke during the entire flight, it isn’t nearly as impressive as if you use it only to highlight specific maneuvers. For example, if you want to perform a knife-edge pass, turn the smoke on before you roll the model to knife-edge, and then shut it off after you complete the maneuver and you roll back to upright level flight. This is much more entertaining, adds a unique visual dimension, and optimizes your smoke fluid usage. 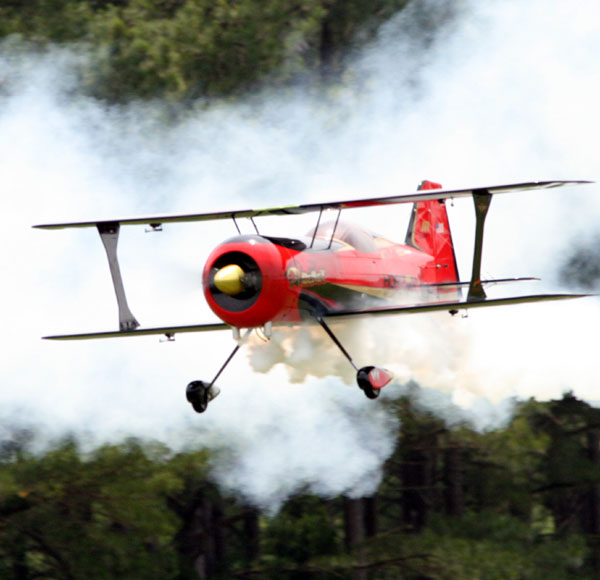 Installing and properly using a smoke system with your aerobatic plane is both quick and easy to accomplish.  Laying down a long, thick, long lasting smoke trail is very satisfying and can be used for both an aerobatic routine, or with WW1 and WW2 warbirds. It’s all about having fun and impressing your flying buddies. Until Next Time, Smoke on and fly hard!

Smoke Fluid
Over the years, I have had great success by using Super Dri Aviation Smoke Oil by MDW Aviation. This fluid is designed for both full scale and model airplanes alike, and it burns very well. Also it is safe for the environment and is bio-degradable. 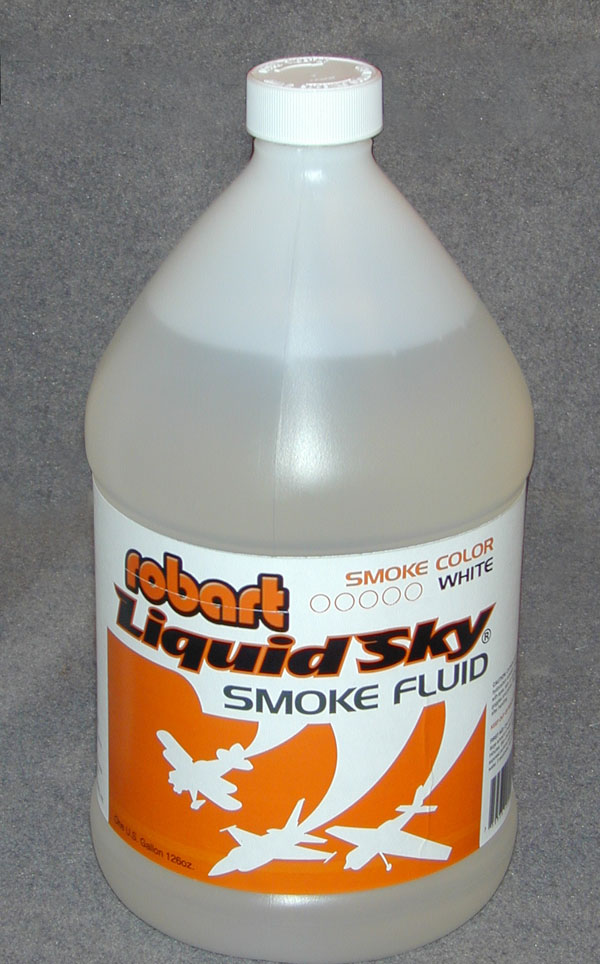 Smoke fluid is also available from Robart Mfg., and their “Liquid Sky” smoke fluid is white in color, long hanging and a unique and pleasing  Root Beer scent. Pilots everywhere are boasting about great success with Robart’s Liquid Sky and it is popular because it does not attack foam. It’s also available in larger containers for the really active show pilot. 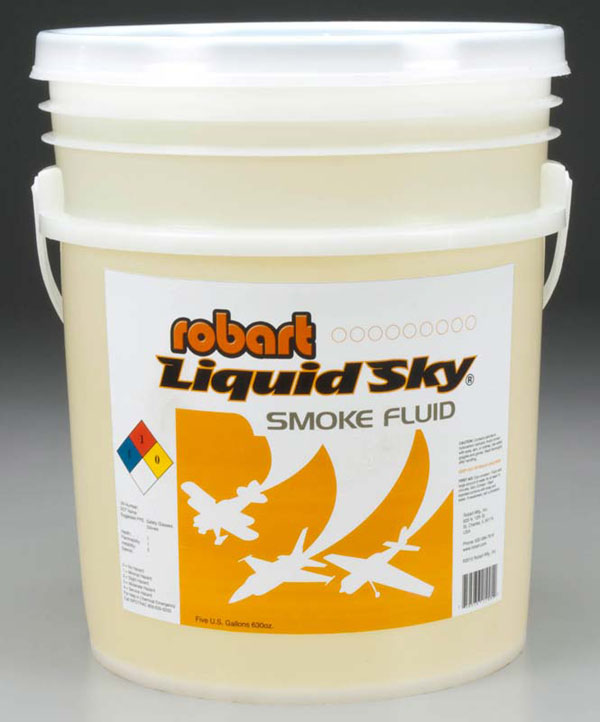 Take a visit to your local hobby shop to order, or check them both out online at: robart.com. 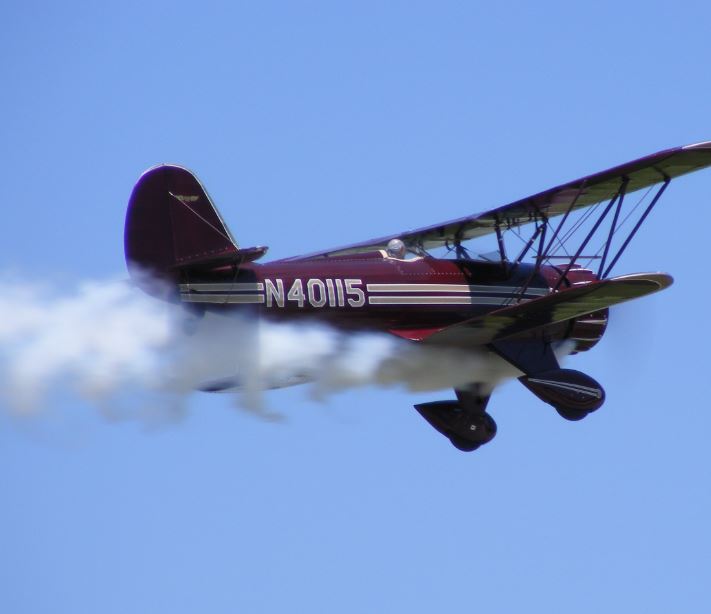 Above, Mitch Epstein’s 2010 Top Gun entry was a sight to behold. Not only was the airplane beautifully built, but it smoked flawlessly throughout the competition.