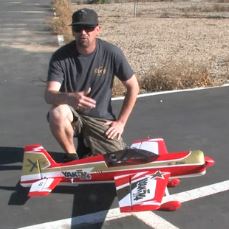 Here’s a Sneak Peak of the new E-flite Carbon Z Yak 54 3X that’s featured in the upcoming July 2014 issue of MAN. Reviewed and test flown by Mike Gantt, this gorgeous 3D flying machine has it all! 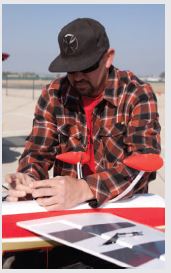 Here’s what Mike has to say:

“Having flown the Yak from a paved surface, it is obvious that there is more than enough power on tap to pull the plane away from Earth in short order. Making the model leap up in a few feet and climb vertically is always fun and also gets you up to knife-edge spin and blender territory in seconds. The AS3X stabilization system manages the control surfaces so well that you might think you are flying a 50cc plane. Throttle management will be a factor for flight times and when you decide to land, just fly it home with the prop turning and manage the elevator all the way to touchdown. A taller landing gear keeps the prop away from that “mean old” tarmac if you should bounce on your first attempt like I did.

Stability: The gear switch operates two flight modes and this was pre-programmed at the factory. When switched to “normal” mode, throws are reduced. This along with the stabilization system makes you feel comfortable right when you take off. In flight, you will be impressed with how solid the model feels at all times.

Tracking: This model airplane was designed to not only fly high-alpha but to also perform precise maneuvers. The Yak carries speed well and does an excellent job of executing IMAC-style moves for its size. Thumb control seems to be the only limitation.

Aerobatics: Flip the switch from “normal” to “3D” and off you go. Huge power means huge maneuvers; no matter if you like giant loops and long slow rolls or crazy tumbles and high alpha flight the Carbon Z Yak 3X has what it takes. The AS3X gets kudos for practically rock-less harriers, and this plane was very easy to steer around post-stall.

Glide and stall performance: The glide is easy to manage: just keep the nose slightly below level. When forced to stall a wing will want to drop, and all I had to do to recover from this was neutralize, add power and remained free and clear from those “plane-grabbing hands” that reach up and reside down below terra firma.

After being told that the spirit of this plane is to excel at high-energy 3D as well as precision flight made me immediately want to add it to my hangar. Also, the ability to open a box and almost instantly fly a model airplane like this is incredible and demonstrates how far technology has advanced.