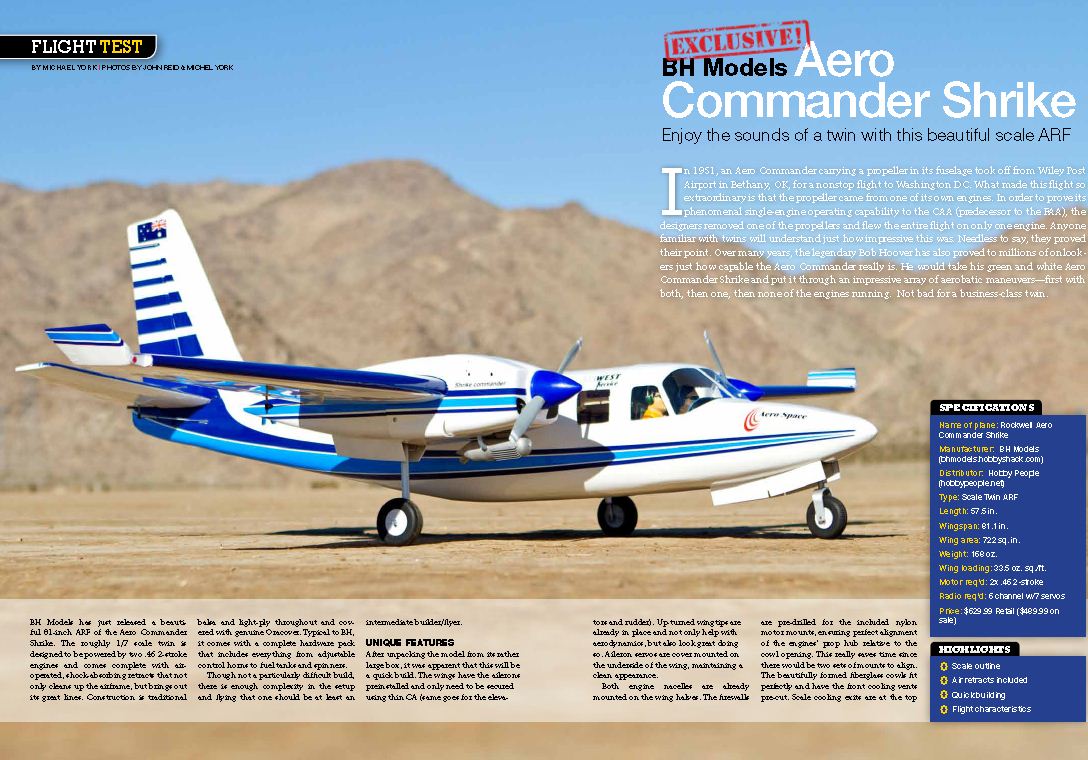 BH Models has just released a beautiful 81-inch ARF of the Aero Commander Shrike. The roughly 1/7-scale twin is designed to be powered by two .46 2-stroke engines and comes complete with air operated, shock-absorbing retracts that not only cleans up the airframe, but brings out its great lines. Construction is traditional balsa and light-ply throughout and covered with genuine Oracover. Typical to BH, it comes with a complete hardware pack that includes everything from adjustable control horns to fuel tanks and spinners. Though not a particularly difficult build, there is enough complexity in the setup and flying that one should be at least an intermediate builder/flyer.

Unique features
After unpacking the model from its rather large box, it was apparent that this will be a quick build. The wings have the ailerons preinstalled and only need to be secured using thin CA (same goes for the elevators and rudder). Up-turned wingtips are already in place and not only help with aerodynamics, but also look great doing so. Aileron servos are cover mounted on the underside of the wing, maintaining a clean appearance.

IN THE AIR
Sunny skies, cool, crisp air with just the slightest breeze right down the runway—what a day for a test flight. After topping off the retract air tank and fuel tanks, the Aero Commander Shrike was ready. During the run up, it was pretty obvious that the two Magnum XLS46R engines would provide plenty of thrust. Since I had the idle adjusted just a little on the high side for safety, I walked the plane into position. The short takeoff roll was well controlled thanks to the tricycle landing gear. Once airborne, I quickly realized that there was plenty of elevator authority, but once I switched to low rates, I could relax a bit. The landing is best done using a standard rectangular pattern so you can gauge and control the speed and descent rate. Flaps would definitely help this plane. The gear is actually quite sturdy, as I found out when running off the end of the runway the first time.