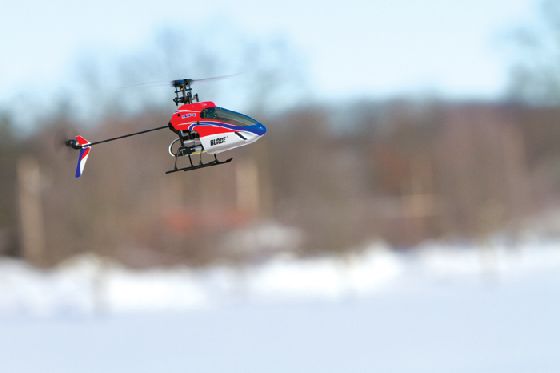 Ultra micro and flybarless helis have been on the scene for some time now – but a flybarless, ultra-micro heli is breaking new ground. The new Blade mCP X is the lightest commercially available collective pitch flybarless heli, and it is fully aerobatic. It will be available in a Bind and Fly (BNF) and ready to fly (RTF) version which includes a four-channel Spektrum transmitter already bound to the model. The heart of the flybarless system is the AS3X, which uses 3-axis gyro stabilization. This gives the ultra light model exceptional cyclic control response while giving it stability.

I just received my Blade mCP X and did a few test hovers in preparation for the full upcoming review in Model Airplane News. It is the RTF version and has everything needed to fly in the box: just charge the flight batteries (two are included).

I couldn’t wait for the battery to charge as I wasn’t sure what to expect from the ultra micro Blade. Some other collective pitch helis in this size range tend to be squirrely and marginally powered which takes the enjoyment out of flying them. The Blade did not disappoint – it flew solid with more than enough power. With the battery charged you need to turn on the transmitter and wait for five seconds before plugging in the flight battery and then leave the heli still for the gyro calibration process. I double checked to make sure the controls operated in the correct direction before taking off.

Because of the three-axis gyro stabilization it is important to remember to takeoff without moving the right stick until reaching about three feet. If you move the cyclic control even slightly the heli will dart off in that direction. I did my test hover indoors and found the model to be very stable in a hover for a collective pitch heli. It will not hover hands off, but it not designed for that.

Two sets of blades are included; fast flight and high-performance. The fast flight blades (these have the protrusion from the leading edge) are for smoother style flying and suited for outdoors. The high-performance blades are better for indoors and aggressive aerobatics as well as 3D. There was a slight breeze during the outdoor testing and photo shoot, but it didn’t bother the model. The Blade can handle slight breezes with no problem, but weighing only a little more than 1.5 oz., there is a limit. The model tracked amazing well in fast forward flight, but it does get small in a hurry. The model seems to carry momentum much like a gasser or turbine heli in that it takes a bit of time to start and stop. Once you get the feel of it you will find the cyclic controls very crisp and responsive. The model responds instantly to collective input and has a fast climb rate. The tail has amazing authority and holding power during all phases of flight.

Standard aerobatics, such as loops and rolls are no problem for the Blade. It is also capable of most 3D maneuvers and inverted flight, although you have to be quick on the sticks. The good news is that the heli is very durable and if you make a mistake chances are good that there will be no damage especially if you hit the throttle hold button.