Flybarless helicopters and their electronic control systems continue to be the wave of the future in model helicopters and are showing up in ever-increasing numbers at our flying fields. New precision-made flybarless rotor heads and advanced stabilization electronics are being developed to make flybars and paddles a thing of the past. The complete removal of the flybar and its associated hardware not only eliminates unneeded weight, but also does away with parts that could cause mechanical malfunctions or slop in the control system. However, the most noticeable reason for this transformation is because a flybarless rotor system has the stability of a flybar in hover while still maintaining excellent aerobatic capabilities. 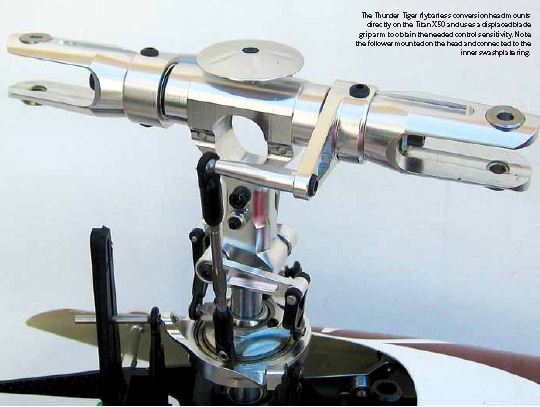 THE ADVANTAGES OF FLYBARLESS CONTROL
One of the problems with flying a helicopter using a flybar and paddles is that much of the feel and flight characteristics of the helicopter is controlled by the size, shape and weight of the paddles. Flybar systems that use large, heavy and thick paddles with a well-rounded leading edge are very desirable for hovering, but they limit the helicopter’s aerobatic capabilities. This type of flybar control system is well-suited to the novice flier trying to master hovering and to large scale helicopters where majestic flying is desired. As the flying skills of the novice pilot improves, however, he will most likely want to enter the field of aerobatics, requiring a change to the flybar paddles. In this case, aerobatic paddles should be light and thin, with a sharp leading edge, which would allow rapid movement of the rotor disk. The problem then becomes which set of new flybar paddles will provide the desired aerobatic flight performance? You can also imagine the complications presented to a helicopter manufacturer. Should they produce a helicopter that’s more suitable for hovering or for aerobatics? Since no one paddle is best for both hover stability and aerobatics, manufacturers will typically take the middle-of-the-road position and use a paddle that is not optimized for either. It is left up to the pilot to buy aftermarket paddles that better conform to his style of flying. As an example, as I got more aggressive in the flying I wanted a more aggressive response to my control inputs, so I tried a set of Curtis Youngblood “Stubz” paddles (curtisyoungblood.com). And I got just what I was looking for: I was amazed at their improved aerobatic characteristics, but at the expense of hover stability. 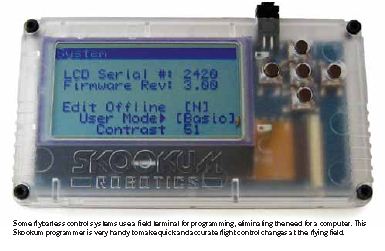 With a flybarless control system, you can have your cake and eat it too. The three-axis gyro provides the desired stability while hovering yet allows the helicopter complete freedom of movement for 3D aerobatic maneuvers. And the reason for this is each axis (aileron, elevator and rudder) is controlled by a heading-hold gyro that provides exceptional hover stability with the control sticks at, or close to, their center position. When you give a control input to maneuver the helicopter, this command is interpreted by the flybarless computer as a command for an angular movement of the rotor disk, and the computer moves the servos as needed to obtain this movement. When I was driving F-16s, we called this “fly-by-wire.” The control stick was actually a pressure transducer, and the more I pressed on the stick the more I commanded the aircraft to move in a certain direction. The onboard computer would look at a variety of factors, such as airspeed, density altitude, G-loading, etc. and then position the flight control surfaces as needed to optimize my commands. While in formation, only small stick forces were needed to maintain position, but larger stick forces enabled maneuvering up to and including 9G turns. This is very similar to what is going on in a flybarless three-axis gyro. Hover stability with slight stick commands, even in windy weather, or maximum maneuvering when desired.

GET THE COMPLETE SCOOP ON FLYBARLESS SYSTEMS IN PAUL TRADELIUS’S FEATURE ARTICLE IN THE 2012 RC HELICOPTER BUYER’S GUIDE, ON SALE SOON!