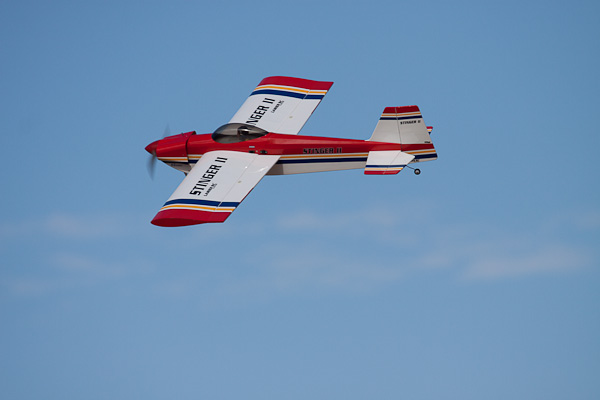 By Michael York
Having pioneered the concept of ARF’s in the 60’s, Lanier RC is still at it after all these years with the introduction of the Stinger II.  You know you’ve been in the hobby for a while when you can say “back when I flew the original”, and I was fortunate enough to fly the original line of Stingers in the early 90’s.  Back then Lanier was just starting to branch out into manufacturing ARF’s and kits out of balsa and ply, versus their traditional plastic fuselage/foam core wing construction.  The original Stinger was such a hit, that it resulted in numerous variants, ranging from mini to giant sized, and I’m glad to see that this fantastic little model carries on the tradition of being a great all around flyer.

Stability. Even though this is a smaller model, it feels like a much larger plane in the air (in a good way). Despite its flat wing, it’s very stable, though not self-correcting It just has a very predictable feel to it, making it easy to stay ahead of in flight. Of

course, on high rates it all just happens a little faster.

Tracking. Just point the Stinger II where you want to go, and voila!, it goes there. The trim scheme is excellent in maintaining visual orientation of the plane.

Aerobatics. One of the changes to the Stinger II from the original is increased control surface size, and this allows you to explore the world of 3D. At the forward end of the recommended CG position, it took a bit of elevator input when inverted and knife-edge, but as you get more acquainted with your new friend, moving the CG aft will remedy most of this. The Stinger II can do it all!

Glide and stall performance. There is a lot of wing area, so glide performance is not an issue. Stalls are very predictable with no bad traits. Even at full up-elevator, it only hinted at a wing drop, and that was easily controlled.

For the complete review, don’t miss the January issue of Model Airplane News!