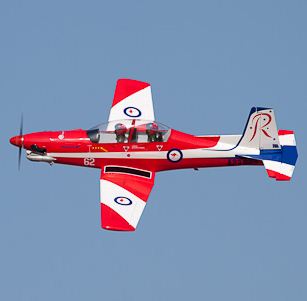 There is just something about the Pilatus PC-9 that strikes a chord in me, and the Seagull Models 1.20-size version of this fantastic plane is no exception. Designed to be powered by a 1.20 2-stroke, a 1.80 4-stroke or equivalent electric motor, this ARF will definitely perform as a pre-jet trainer should. With a wingspan that’s an inch short of six feet, it comes in at approximately 1/5.5 scale, making it big enough to be easily seen as it speeds by, but not so big that it becomes difficult to transport. The conventional balsa and lite-ply construction is covered with UltraCote in the red/white/blue livery of Australian Roulettes aerobatic display team. In the box, all of the components are well protected from damage, and the low parts count gives a good indication that this will be a relatively quick build. And because it comes with a complete hardware set, you won’t have to worry about making trips to your local hobby shop for screws, engine mount or fuel tank. Even the parts for the electric conversion are included and the beautifully finished fiberglass cowl will cover whatever powerplant you do decide to use. The coil-sprung, tricycle-gear retracts are mechanical, meaning no leaky air lines or cylinders to worry about and field assembly is less cumbersome.

Thanks to an instruction manual filled with plenty of photos and diagrams, anyone but the pure novice will have no issues getting this plane ready for flight. Since it does emulate a performance aircraft, it’s intended for intermediate to advanced pilots.

General Flight Performance
Stability: There is enough dihedral in the wing to provide some inherent stability. Once trimmed, it will fly hands off from one end of the field to the other.

Tracking: The long tail moment makes for a very arrow-like feel. I know this term seems to come up a lot, but it tracks as if it was on rails. If you enter a maneuver straight and level, it requires almost no input to maintain that track (provided there is no crosswind).

Aerobatics: The PC-9 will do pretty much anything other than 3D. It looks best duplicating its full-size counterpart’s maneuvers, such as big loops, four-point rolls and various turnaround procedures. Roll rate is very axial and quick but stops the instant you release the control input. The long fuselage helps maintain knife-edge with minimal rudder input.

Glide and stall performance: You definitely fly this plane on the wing. If the speed is kept up, the glide angle is relatively shallow and it will cover some distance.   Though stalls are easily recovered, you don’t want to slow down too much close to  the ground, especially if you come in dead stick.