I often enjoy attending the annual Warbirds and Classics over the Midwest RC event held in Fond du Lac, WI as there’s always a bunch of great looking scale airplanes to photograph. One airplane that just looked so interesting I could not help but be drawn toward it. Looking like a cross between a WW II fighter and a Gee Bee racer, this unusual Soviet aircraft is a Polikarpov I-16 and it is the work of Wolfram Donalies. Here’s his back story.–Text and photos by Palmer Johnson

Why did you choose this plane as a project?
I love WW II fighters and because of my German heritage, I have built a Messerschmitt Bf-109 and two Vailly Aviation FW-190s. I was looking for an unusual project other than a German plane and the Polikarpov I-16 seemed to fit that roll. I really liked the looks of it. 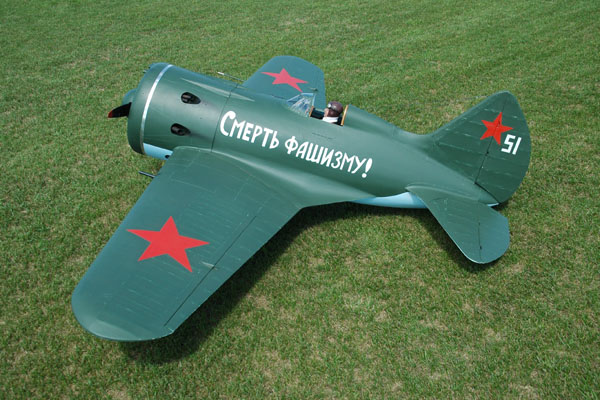 (Above)  The writing translates into “Death to Fascism”

The model took just under 2 years to complete. The model 30% scale giving it a 107-inch wingspan and is 72 inches long. It weighs 47lbs., and has a wing-loading of 65oz./sq. ft. The engine is a ZDZ 80cc single-cylinder swinging a 26×10 Xoar prop. It provided quite a challenge since this was my first totally scratch build project. It is completely built from balsa, lite-ply and aircraft plywood. The wing separates in the center for ease of transportation and is joined using two carbon fiber tubes. For control I use a 2.4 GHz Futaba transmitter and both Futaba and JR servos. The retracts were made by Lenny at ShindinMachine.com.

Inside, the airborne gear is a mix of Futaba S9152 and JR 8411 digital/metal gear servos on the control surfaces. I use two Futaba 8-chanel receivers for redundant control circuits, each running one aileron, one elevator-half and so on. There are no exposed control linkages, servo arms or switches on the plane other then the scale aileron control hookup on top of the wing. The radio gear switches, choke, fuel and air-filler fittings are all hidden under a door on the right side of the cowl. I’m using three 2600mAh lithium-ion Fromeco batteries with voltage regulators, one for each receiver and one for the ignition system.

What about the finish?

It is covered with 0.7oz. fiberglass cloth and West Systems epoxy resin. The tail feathers and outer wing panels are covered with fabric just like the full scale and I used 21st Century iron-on fabric. I tried to duplicate the structure of the full scale under the fabric. The panel lines were made using 1/16-inch chart tape that was then removed after priming. The rivets are drops of wood-glue applied with a syringe before priming. I painted it with latex house paint that I had matched to color chips at the hardware store. I made frisket film masks to paint on the slogan on the sides. 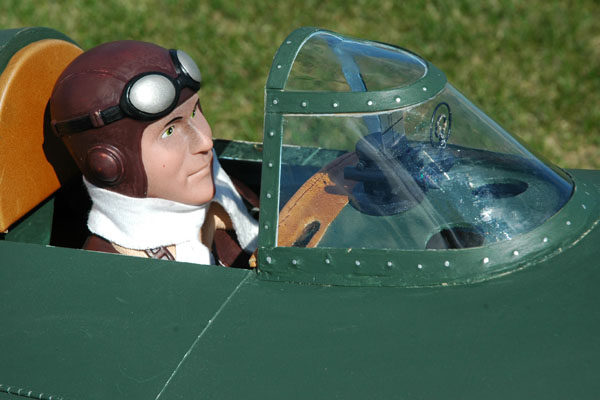 So you made the cowling and other formed parts?

Yes, I formed the clear windshield from sheet plastic that I heated and pushed through a shaped hole with a wood plug shaped like the windshield. The windshield frame is constructed of 1/64-inch aircraft plywood as are some of the scale panels. I molded the engine cowl and tail cone using the lost foam method with epoxy resin and several layers of fiberglass cloth. For the simulated exhaust-pipes I used copper plumbing fittings that received a light coat of black. 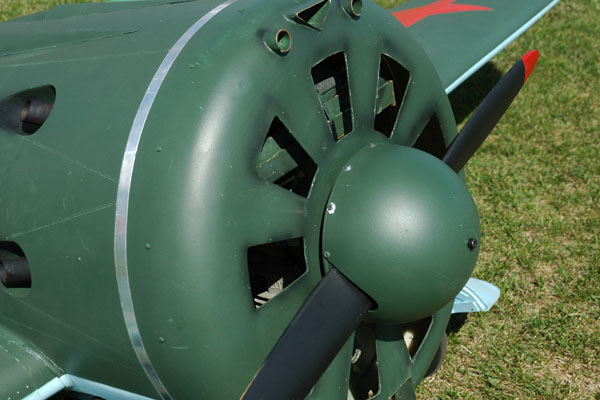 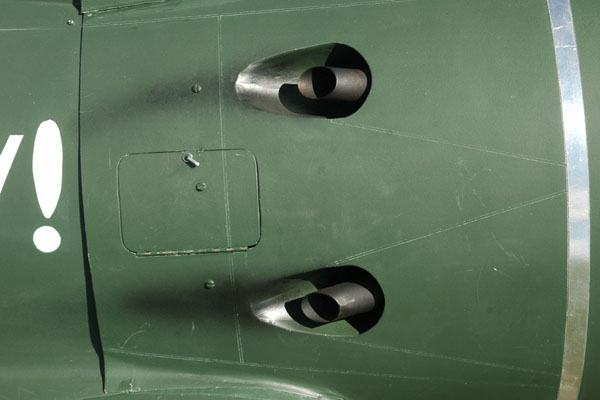 How does the model perform?

I was somewhat worried before the first flight since the plane has my own airfoil, is very short-coupled and came out a little heavier than my target weight, (it needed 7 lbs. in the nose to balance.) I first did a takeoff run that I aborted to see how it would behave. On the second run it lifted off ever so gently and most of my worries were gone. It is a very solid flier, does all the warbird maneuvers and is not affected much by the wind, as long as I have enough run-out distance for landing. 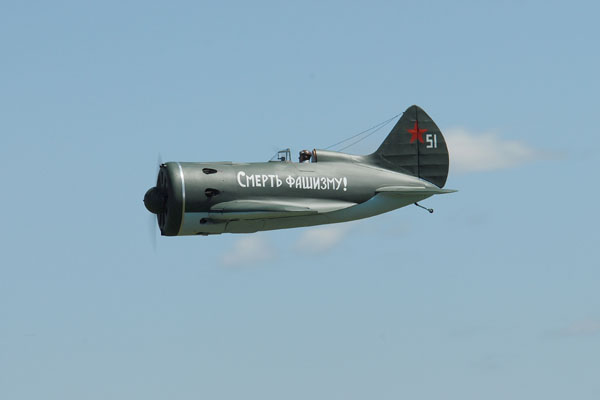