On February 6, SpaceX’s Falcon Heavy, the world’s most powerful rocket, thundered to life and cleared the launch gantry powered by 27 engines and nearly 5 million pounds of thrust. Kicking off a spectacular maiden flight for the Falcon Heavy, it sent founder Elon Musk’s cherry red Tesla Roadster on a journey that will reach into the asteroid belt well beyond Mars.

Easily the loudest and most dramatic launch from Florida’s “Space Coast” since the space shuttle retired in 2011, the Falcon Heavy, using three core stages powered by nine engines each, put on a dazzling show. Spectacular as it was, the launching was just the appetizer for a long-awaited test flight. Eight minutes after the rocket took off, two of the three Falcon 9 core stages that helped power the vehicle out of the lower atmosphere made rocket-powered descents to side-by-side touchdowns at the Cape Canaveral Air Force Station, generating thunderous sonic booms as they slowed for landing.

The central core stage, however, ran out of propellant on the way down and was unable to restart its engines for descent into the lower atmosphere. Instead, it crashed into the Atlantic at about 300 mph, missing the “Of Course I Still Love You” droneship by about the length of a football field, damaging two of the unpiloted ship’s thrusters and showering the deck with debris.

None of the stages used for Tuesday’s flight were to be used again as SpaceX transitions to an upgraded version of the Falcon rocket and recovering the boosters was a secondary test objective. The major goal was demonstrating a new heavy-lift rocket and Musk was thrilled with the mission.

“I’m really excited about today, incredibly proud of the SpaceX team,” Musk said after launch. “They’ve done an incredible job of creating what really is the most advanced rocket in the world, the biggest rocket in the world. I’m still trying to absorb everything that happened because it seems surreal to me.”

Musk tried to downplay expectations before launch, warning that launching a powerful new rocket on its first flight was risky business.
“I had this image of a giant explosion on the pad and a wheel bouncing down the road and the Tesla logo landing somewhere with a thud,” he told reporters after launch. “But fortunately, that’s not what happened. The mission has begun really as well as one could have hoped with the exception of the center core.” 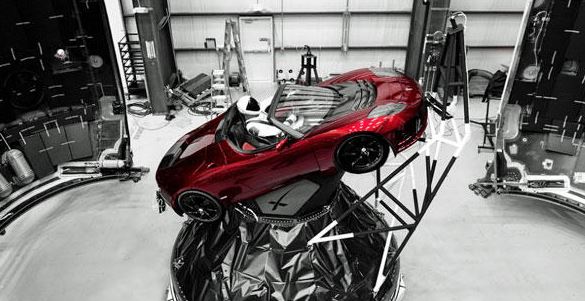 While the Tesla on board for the rocket’s first test flight tipped the scales at a relatively modest one ton weight, the Heavy has the ability to boost nearly 140,000 pounds to low-Earth orbit and more than 37,000 pounds to Earth-escape trajectories to Mars. NASA is currently building an even more powerful rocket known as the Space Launch System, or SLS, that will generate 8.8 million pounds of thrust in its initial configuration and up to 11.9 million pounds in a follow-on cargo variant. The initial version will be able to boost more than 50,000 pounds to Earth-escape velocity.

But the SLS is not expected to fly until late 2019 or later. Until then, the Falcon Heavy will be the world’s most powerful rocket, offering a relatively low-cost option for getting heavy payloads into space for NASA, the Department of Defense and commercial satellite operators. 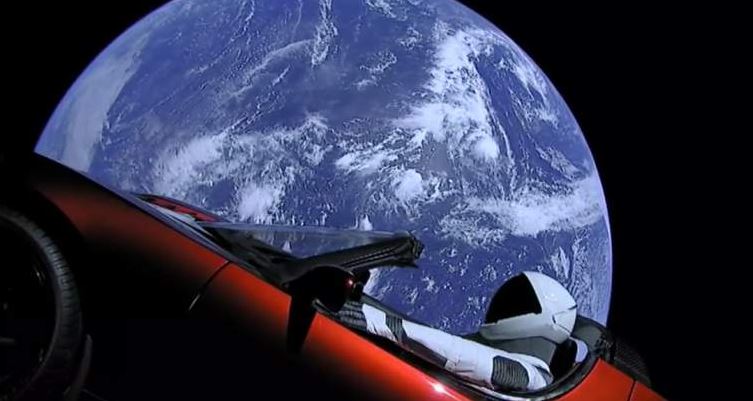 U.S. Commerce Secretary Wilbur Ross, who attended the launch at the Kennedy Space Center, said the Heavy offers a promising alternative for heavy weight national security satellites that are too big for the Falcon 9 and currently fly exclusively on more expensive United Launch Alliance Delta 4s. As it accelerated skyward, aerodynamic forces quickly ramped up, forming an invisible “bow shock” over the nose of the central core stage, creating complex interactions and, possibly, localized heating as the spacecraft picked up speed plowing through the thick lower atmosphere.

But the Heavy endured those stresses, rocketing through the speed of sound and the region of maximum aerodynamic stress about a minute after liftoff. The 18 engines in the two outboard core stages shut down two-and-a-half minutes after launch. Both stages then separated from the core booster, flipped around, restarted three engines each and began flying back to Florida. The nine center stage engines continued firing for another 30 seconds or so before they, too, shut down and the second stage pulled away on its own, lighting up a single Merlin engine to continue the boost toward a preliminary orbit.

The central core stage then fired three of its engines to set up a landing on the “Of Course I Still Love You” stationed several hundred miles east of Cape Canaveral. The two outboard stages, meanwhile, restarted three engines to slow down for atmospheric entry.

The burns — brilliant side-by-side jets of flame — were clearly visible across Florida’s east coast as the two boosters plunged tail-first toward pads at Landing Zone 1 at the Cape Canaveral Air Force Station. Falling like bombs, the rockets each restarted a single engine to slow for touchdown, each one deploying four landing legs. 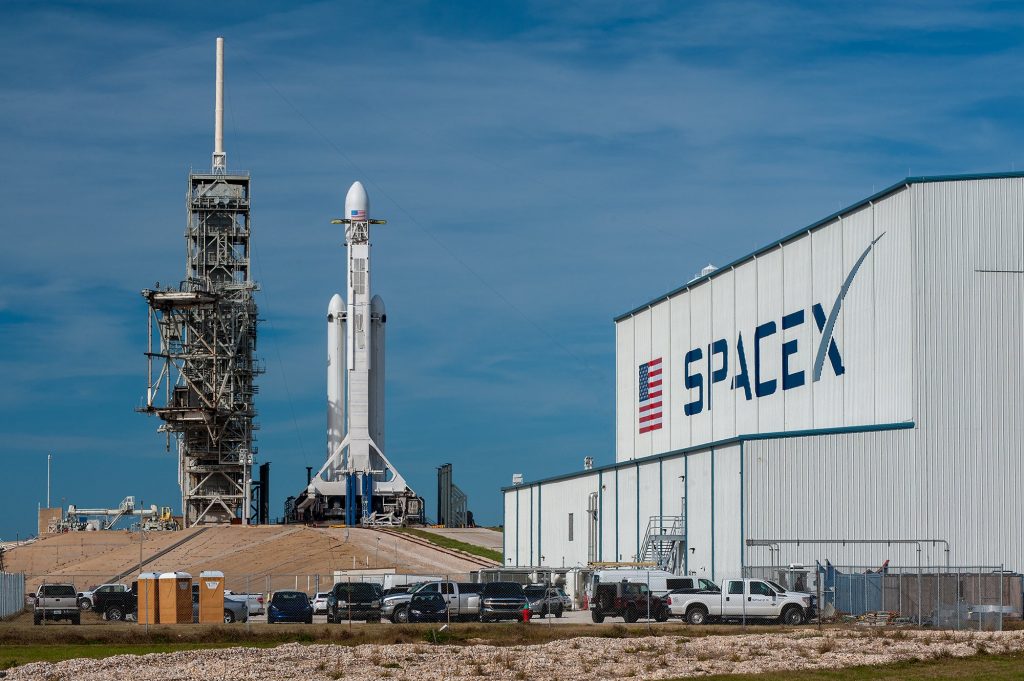 “I think Heavy creates a lot of opportunities,” said John Young, an engineer on a SpaceX advisory board. “There are several communities in Washington that would love to have a bigger aperture, either optical or radar, to collect more (national security) data, so this creates a whole new opportunity.”

But it’s unclear how SpaceX’s efforts to develop an even larger rocket, known as the BFR, will affect its near-term plans for the Heavy. Musk said last year the Heavy would be used to launch two paying customers on a flight to loop around the moon by the end of this year, but that mission is on hold.