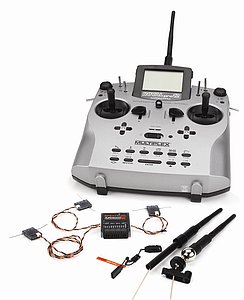 Spektrum’s new DSM2™ Air Module was made exclusively for the Multiplex EVO/3030 Radio, a popular high-end radio sold in Germany, Austria, Scandinavia, Holland, France and Italy. It lets the many users of the Multiplex keep the radio system they already trust, while offering greater reliability thanks to a loss of glitches from model-generated interference. The DSM2 Air Module also eliminates component drift common in older style equipment through a modern, self-tuning integrated RF circuit.

·        Short antennas are easy to install, so no unsightly wires are trailing out the back of the model