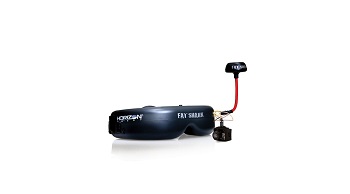 You don’t have to be an electronics wiz to equip a park flyer or quad racer for FPV flight. This convenient Spektrum™ FPV bundle makes it easy. You get everything you need – a 25mw FPV camera/transmitter, a compatible FPV headset and accessories – all in one box.

The VA2500 combines an FPV camera and a 25mw, 5.8GHz transmitter into a single unit no bigger than a thimble. It can be powered separately or by the model’s flight battery through a spare channel on the receiver. Either option requires a 2S or 3S Li-Po battery.

When powering it through the receiver, its integrated power filter will prevent interference from the model’s motor and servos. You can also remotely change the video frequency by assigning a transmitter switch or dial to the receiver port you’ve plugged the camera into.

NOTE: A HAM license is required to operate the VA2500 in the U.S.

Spektrum Teleporter V4 FPV Headset
Developed exclusively for Horizon Hobby by Fat Shark, the Teleporter V4 headset is easily one of the best values in FPV fun. One of its coolest features is Digital Head Tracking. Digital Head Tracking lets you look around the environment your model is flying through without the extra weight and complexity of a mechanical camera gimbal. Special sensors and software in the headset allow you to pan and tilt your field of view using the fixed-position VA2500 camera that’s included. 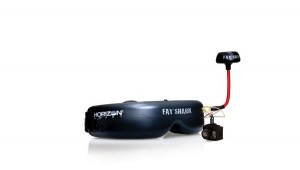