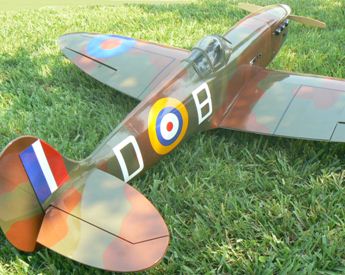 Tony Iannucelli was thrilled with the looks of his Hangar 9 .60-size Spitfire, but he wanted to personalize it with invasion stripes and electric retracts. Check out his ARF adventure here:

Growing up in the hobby, the warbird I wanted to model most was the iconic P-51 Mustang.  Second on my list was a Spitfire.  I’ve had several Mustangs over the years, but never could find the right Spitfire.  A few months ago I got an email coupon from Horizon Hobby, and the timing was right.  After reading the reviews on their Hangar 9 Spitfire, I decided the kit and price were a good fit for my modeling desires and my budget.  Most of you know how to assemble an ARF; this article presents a few changes from the norm that you might find interesting and useful.

Hangar 9’s 60-90 size Mustang, Thunderbolt, Corsair, and Wildcat have become staples of the $300-and-under nitro powered warbird class.  The Spitfire MkII is also a leader in that club and is true ARF that was very easy to assemble; parts fit was excellent. The plane is really semi-scale but changes to proportions are very subtle and no doubt were made to make it more flyable for the average modeler. 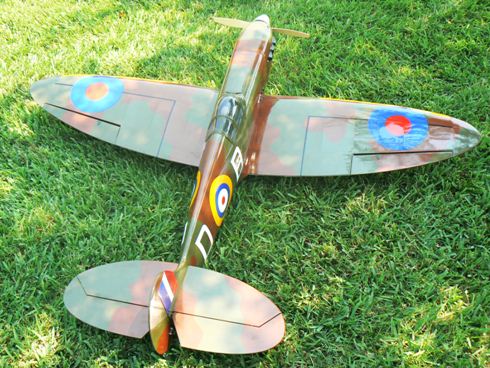 This Spitfire has a striking camouflage color scheme done in UltraCote, my favorite plastic covering.  There was not a wrinkle or serious blemish anywhere on it right out of the well-packaged box.  Mechanical retracts were pre-installed, including the wires. The cowl, canopy and fiberglass scale accessory parts were excellent.  The hardware is all usable, and although I sometimes substitute for my favorite brands, it wasn’t necessary.  Everything went together correctly and quickly and the manual was well-written and illustrated.  The Spitfire is a beautiful aircraft as designed and presented by Hangar 9.  Nothing needed to be changed, but I wanted to experiment a bit and I’m happy I did.  You be the judge!

I try to make my planes’ appearance unique, sometimes with custom decals, sometimes with different trim or color schemes.  Although this Spitfire had a nice color scheme on the top side, it was plain gray on the bottom, and I really don’t like to fly gray airplanes.  The UltraCote was shiny, something I can live with, but I can’t abide the gray color.  This one begged for some invasion stripes.  I purchased some MonoKote strips, cut them to size, and applied them with plenty of soapy spray lubricant.  I had already joined the wing and placed it on some towels on part of my bench.  The installation of the first three strips went well, and gave me courage to continue.

Several hours later, the bottom of the wing was finished.  I also did the rear of the fuselage and the stripes really brought the bottom of the plane to life.  I judge the time spent on this trim well worth the effort.  By the way, using a spray water bottle with a few drops of dishwasher liquid soap is the ONLY way to install large sticky backed decals or trim.  Try it once and you will be convinced.  The installation of the strips was trouble-free using this method. 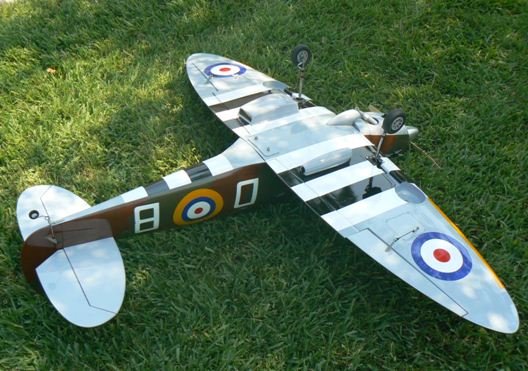 Although it most likely would have held up, I removed the stock landing gear before I joined the wings.  It has 5/32 wire struts, and experience tells me that might not be enough for a nine pound warbird on a grass runway with me flying it.  Reviewers on the Horizon website and elsewhere were of differing opinions.  I opted to beef up the gear before the first flight while everything was nice and clean and easy to work on.  I installed a set of Hobby King electric retracts with Robart Struts, and I’m really happy I did.  I added 3/16” wire stubs onto which the struts are attached along with scale Robart wheels.  I am optimistic they would hold up on any runway.

I’ve had retractable landing gear over the years in many planes.  I’ve used air and mechanicals, with the main gear in warbirds mostly mechanical because most warbirds usually don’t require complicated nose gear setups.  Mechanicals require a heavy duty 180 degree servo, careful alignment and installation, strong servo attachments, and any screw up will drain the flight battery while you are flying.  Air systems require air pumps at the field, air lines, an air valve, and a servo in the plane, and are subject to leaks.  Decades ago, Kraft made “Multicon” retracts which were electric, but they cost over $140 at the time, which was about my weekly salary back then.  Suffice to say I never owned a set back in the early 1970s.  Mechanicals, air, and expensive electrics were the retract choices until now.

The Hobby King electric retracts I used on the Spitfire are designed for planes up to 10 pounds.  This Spitfire came in at just under nine pounds, so I had no worries.  Each unit is self-contained with just one cable exiting at the motor.  The retracts are at the top in the following picture. 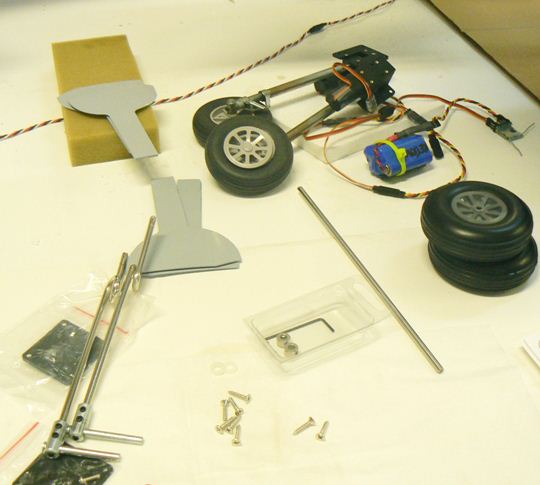 The two units with Robart struts and wheels are connected with a ‘Y’ which is then connected to channel 5 in a secondary receiver (shown on the right).  The small blue battery pack along with the wiring and the receiver all fit easily in the wing cavity where a retract servo would normally be.  When I turn on the main receiver, since the retract receiver is bound with the same GUID, the result is … magic!

When the channel five retract switch is flipped on the transmitter the wheels cycle at scale speed.  No air pumps, no worry about binding wires, no linkage issues, no problems.  No drain on the flight pack battery either.  Not to say a hard landing wouldn’t ruin my day, but each unit cost only $7.95… that’s $16 for a PAIR, plus an inexpensive receiver, and a battery made from cells left over from old flight packs.  I also installed a small switch on the side of the fuselage that turns the battery on/off between flights.  My backup landing struts you see on the lower left feature 5mm wire and Robart 3/16 axles.  I don’t think I’ll need them.  The confidence factor is very high with these electrics! 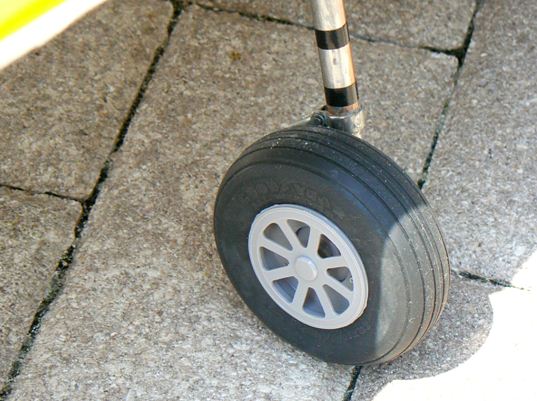 I think this system will be the way to go in the future for me. I’ve cycled them 30-40 times on the bench, and they work flawlessly with very little battery drain.  The weight penalty is minimal vs. mechanicals.  They haven’t been battle tested yet; let’s see if 20-30 landings on a grass field have them still working dependably.  If they hold up, I’ll retrofit them in a couple of other warbirds I have.  It will be an easy job.  The Robart struts are my third set.  They are well worth the money.  Gear doors can be attached to the struts, but I think they look good and certainly function well without them.

The plane weighs about nine pounds as noted earlier.  My wife hand-painted a pilot bust for me.  If I left out the pilot and used the stock wheels, it would be a few ounces lighter.  That would put the weight in the middle of the range predicted by Hangar 9.  I’d rather keep the pilot in there. The wing loading is 28 ounces, reasonably light for a warbird.

Sometime down the road I might spray a coat of flat clear on this plane along with some weathering details.  My special Spitfire looks great in my hangar as is, however, so I’ll wait and see if the extra work would make a big difference and would be warranted.

Thanks Hangar 9, Robart, Monokote and Hobby King!  If anyone wants more detail or has questions, please let me know.