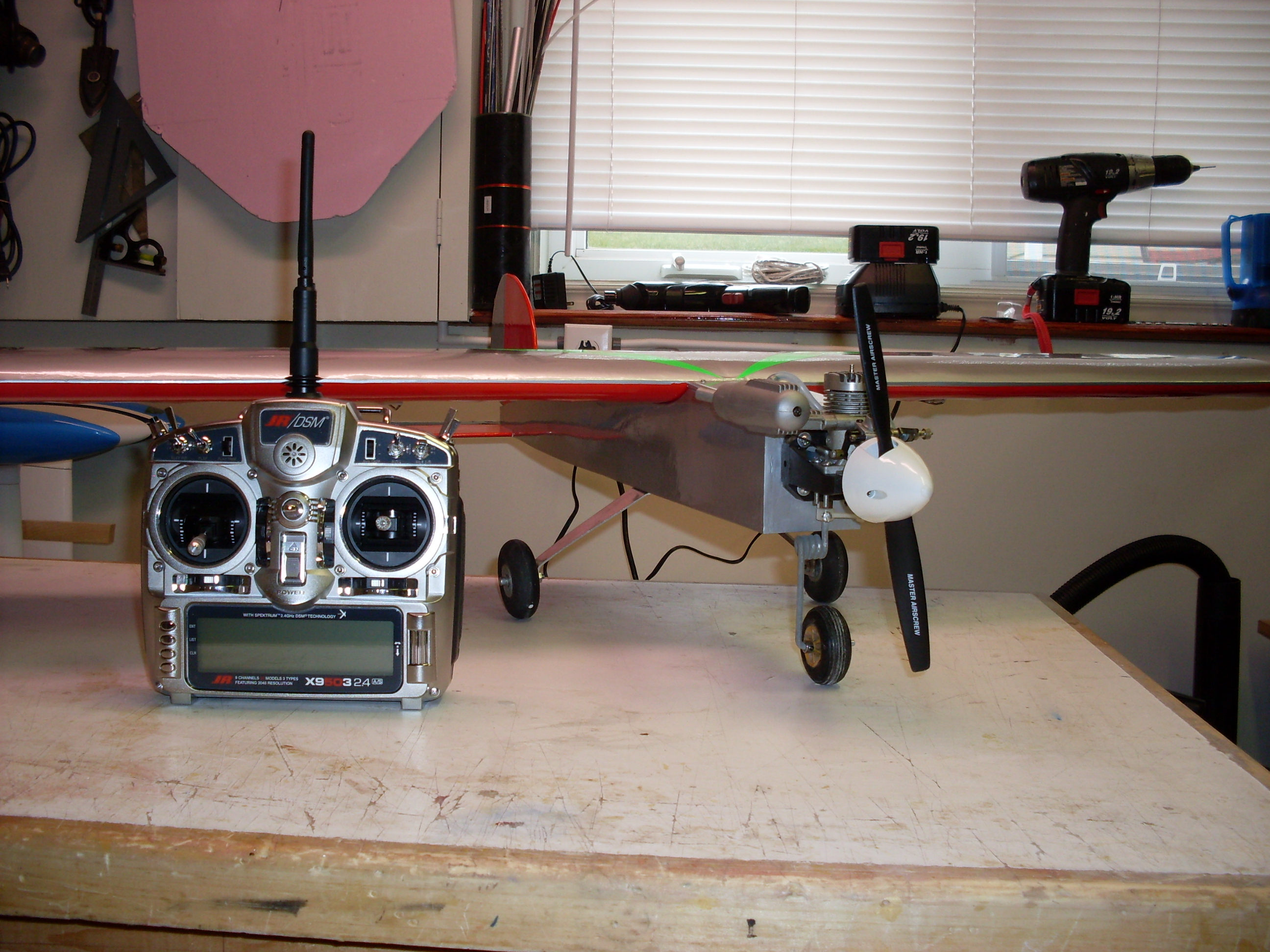 It’s well into the second week of the build, time to get this project finished and ready for test flight on Father’s Day.  The fuse and wing are framed just a few things to do, mount wing, final sanding, covering, hinges, install hardware, engine, fuel tank, radio gear, balance and set-up.

During the construction of the wing and fuse some pre-work was done to allow for the wing to be bolted on.   To spread the load of wing mounting bolt a 1/8” 1 ¼” x 3” ply plate was installed on wing.  The center of ply was marked, a 9/32 hole drilled though plate.  The plate was glued to the top of wing 1/8” inch from trailing edge at center.  The wing was centered on the fuse, measuring wing tip to tail for left & right sides ensured it is square to fuse.  With the wing in place, a 1/8” hole was drilled though the center of hole in ply though wing and through ply mount in fuse.  The hole in wing was enlarged to 9/32”.  The hole in fuselage wing mount was enlarged to 7/32 and threaded using ¼-20 tap, the threads were then hardened with thin CA.

The fuse & wing were given a final sanding with 320 grit paper.  The corners of fuse and leading edges were rounded.  Once sanding was complete the parts were vacuumed & a tack rag used to make them dust free.  The fuse was covered first in the following order, bottom, sides, top, firewall, stab bottom, stab top, vertical fin, rudder & elevator.  Once covered the holes for pushrods and t-nuts (gear & motor mount) were opened using a hot soldering iron, I find it easier to melt a hole than cut one.  A “y” harness was installed in wing before covering, a long one that could reach the servo mounts, and this would make installing the servos easier.  The wing was covered wing bottom, top and ailerons. The servo mounts & wing bolt hole were opened.

CA hinges were used for all surfaces.  The location of each hinge was marked, an x-acto knife used to cut slots in both sides (I really need to get one of those Great Planes hinge slotting tools).  A t-pin was inserted through the middle of each hinge, the hinges then inserted in control surface then surface mounted.  Thin CA was used to glue the hinges once the surface was in place; the t-pins removed the surface then defected up & down to make movement easy.  Each control surface was completed the same way.

The next step was installing the control horns keeping the clevis hole aligned with the hinge line.  This was followed by the engine mount which was also the nose wheel mount.  The landing gear was bolted to fuse using the t-nuts install during fuselage construction.  The HS-81 servos were installed in wing, the servos plugged into the ‘y’ harness installed before covering.  HS-425 was used for elevator & rudder these were installed on the hardwood rails in fuse.  The throttle servo was an HS-55 mounted to fuse side near F3.  This was followed by installing the rest of radio gear, switch, charge jack, battery and receiver.

I’m using an old OS .25FP to power the model.  It was mounted in the Great Planes mount; the mount was drilled & tapped for 6-32 bolts.  A 6 oz. fuel tank was installed and the lines connected to the engine, an APC 9×6 prop installed along with a 2” spinner.  The next step was to balance the plane, with the receiver battery pack aft of the F3 former the plane balanced on the spar.  I also checked the lateral balance no changes were needed.

The last item was to set the control throws.  Using a homemade control surface deflector gauge the throws were set I use the same basic configuration for most sport models, this is a starting point, and trim flights will indicate if more changes are needed.  Aileron & elevator were set with 15 degree low rate 20 degree high rate; expo for low rate 30% high ate 50%.  Rudder throw was set to 1 ½ left & right at widest part of rudder.

That’s it a two week build now ready to fly.  It was a fast & fun build, looking forward to test flight seeing the “Spirit of Ob” fly, hopefully a successful completion to a 35 year old story. 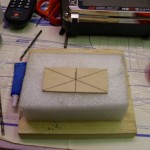 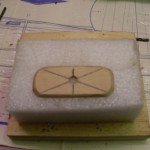 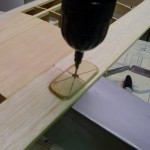 1/8 inch guide hole through wing and block in fuse. 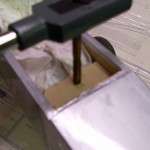 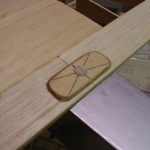 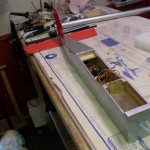 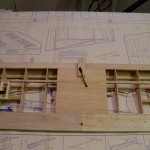 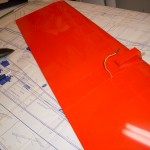 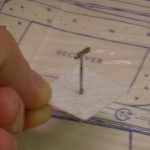 T-Pin inserted in hinge center prior to install. 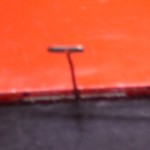 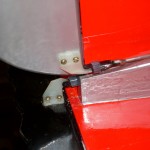 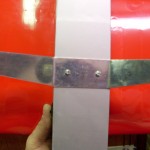 Landing gear bolted to fuse, ply doubler & t-nuts on inside. 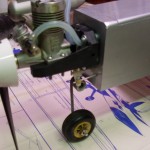 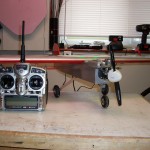