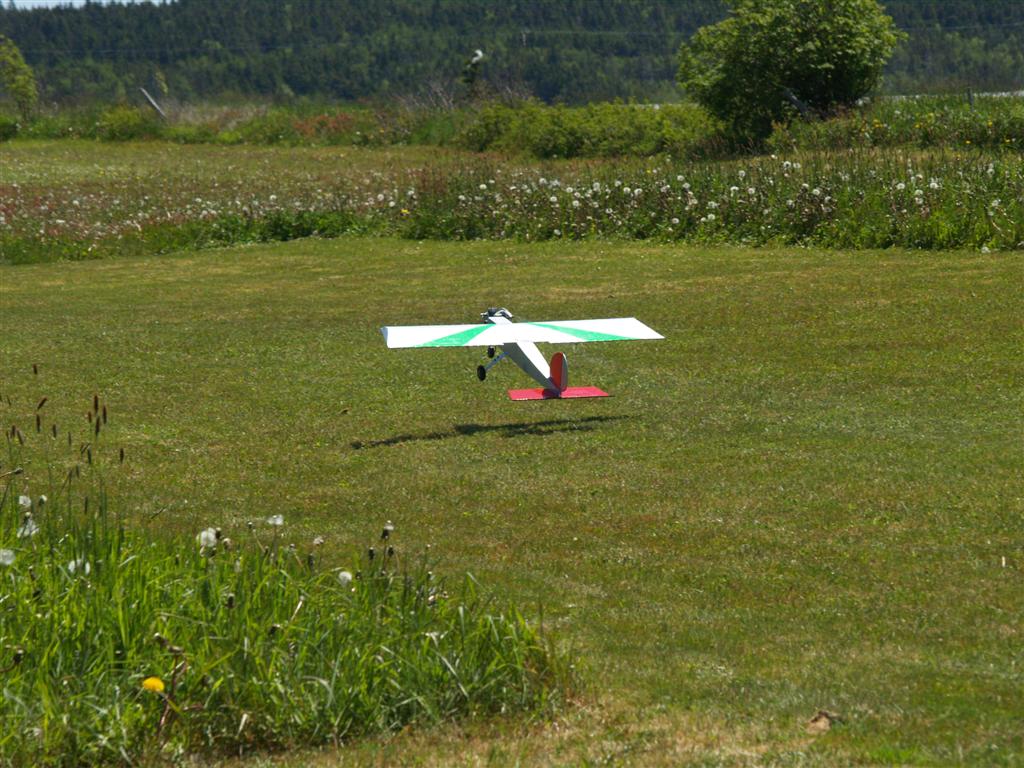 Those over 40 probably know who Paul Harvey is and the significance of “The Rest of the Story”.  Bringing this project to conclusion and completing that first test flight reminded me of those wonderful stories on radio.

I did it, completed the build in time to have the first test flight on Father’s Day.  The weather was perfect the light winds warm and sunny.  Pam had the camera Logan was taking video.  The opportunity to re-write a 30 year old modeling adventure and do it in memory of my Dad…the stars & planets were lining up this was a significant event.

Preparing for the test flight started with checking the balance lateral & CG, battery, range check, everything was tight as it should be.  The fuel tank was filled, time to start the engine.  The OS .25 just didn’t want to start.  After some fiddling, trial & error the cause was determined to be a bad glow plug.  That was an easy fix, a new plug was screwed in the head.  Let’s try starting again, this time the electric starter doesn’t work, one of the wires had broken, an easy fix but it needed a soldering iron.  No big deal a chicken stick will have to do, the starter would be fixed back at home.  A little prime for the OS, attach the glow driver, couple of flips with the chicken stick, it starts.  Quickly I tuned the engine not too lean; it was running strong with good throttle transition.

I attempted to taxi the Das Little Stik into position on our grass runway.  The wheels on the Stik are small the grass was a little long.  The APC propeller was cutting more grass than air, it was clear taxiing into position wasn’t possible, no big deal just carry the plane out into position.  Throttling up the plane began to move forward slowly gaining speed as it mowed grass along the way, continuing until the engine stalled.  Twice more the same thing…arrgh, then realizing in my hurry to get this test flight done I was attempting to take-off downwind!  What a silly rookie mistake.

With the engine running, the plane pointed into the wind, grass in the middle of runway trimmed (from previous take-off attempts) I advanced the throttle and began the take-off run.  Quickly gaining speed as it rolled down the grass runway, apply a little up elevator and the plane was in the air.  I was shaking like a newbie on first solo flight.  The plane was slowly rolling to the left, leveling the wings, the plane immediately did complete roll to the LEFT!  REVERSED AILERONS! and judging by the roll rate the control deflection was much too high.  Reduce throttle get it level and up-right, try to fly it on rudder; that resulted in a snap roll.  As I chased the aircraft all over the sky it was apparent that crashing was inevitable, I throttled back, hoping for the best, the plane went in hard.  My heart was heavy that sick sinking terrible feeling when you let yourself (or parents) down.

Arriving at the crash site my worst fears were realized the damage was extensive.  From the spinner to half way back the fuse not a piece was bigger than a quarter.  The OS .25 was totaled, the carb sheared off, the crankcase shattered.  The wing was in equally bad shape, all spars broken, there were two ribs still intact the rest, not so much.  With my head low I picked up all the pieces to take it home.

Leaving the field in a sad mood like that is not a good thing, flying is about having fun.  Once the mess was clean-up I put in 3 flights on another plane that I had brought with me to the field.  Never go to the field for a test flight with just one plane.  This way I did get in a few successful flights for the day.

Returning home I put all the pieces on my work bench, there they stayed for a couple of weeks.  During that time I read the article “Don’t trash that crash” on the MAN website by John Reid.  Inspired by John’s article & remembering my Dad’s attitude after the accident with the original plane I began to rebuild the Stik.  This was an extensive rebuild with many of the parts needing to be replaced.  Perhaps in a future article I can explain some of the techniques used, for now it’s best explained as, glue all the pieces together that fit, fill in all the holes & gaps with airplane shaped pieces.

After more than a month of rebuilding the Spirit of Ob was back together ready to fly.  It was hanging from the ceiling in my workshop for several weeks waiting for me to prepare mentally for the next test flight.  It all seems a little over dramatic doesn’t it?

On August 12, 2012 I went to the field with the Das Little Stik, checking everything (twice) including control movement direction and the aileron deflection reduced to 60%.  It was fueled, started and the engine tuned (another old OS .25 FP).  The take-off & flight was uneventful.  The plane flew well and handles like a Stik should, a good all-around sport plane.  The Spirit of Ob is back hanging from the ceiling in my workshop; it’s an example of a wonderful childhood memory, perseverance, determination and maybe just a littlestubbornness.

Finally as Paul Harvey would say, “Now you know the rest of the story”. 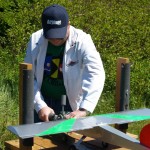 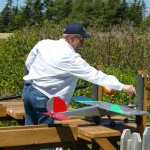 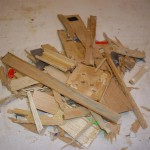 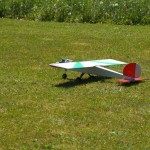 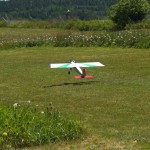 Woo Hoo this is fun.