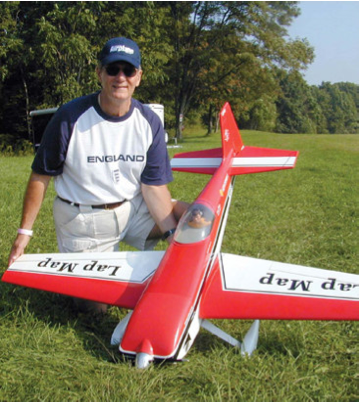 George Leu with the second model built from the MAN plans. The decals and the pilot figure come from Cajun RC.

The red-and-white Lap Map Staudacher is a well-known aerobatic airplane. Flown by Michael Goulian at the 1993 and ’94 IAC World Championships, it has always been one of my favorites.

This model’s construction is the product of teamwork. Back in 2001, Model Airplane News editor Gerry Yarrish and I discussed several airplanes suitable for construction articles. We both thought that the Staudacher 300-GS was a natural for a comeback. I gave Gerry a 3-view drawing, and in about three weeks, he had turned them into a set of CAD plans for a .60-size model! Gerry is an artist with his DrawingBoard program from Ashlar.

I built the prototype and penciled in necessary changes on the plans. After a few flights, I noted other changes to tweak its flight performance. Gerry’s plans had a scale airfoil, but I thought a thicker one similar to Joe Bridi’s Kaos design would be better. Gerry adjusted the drawings and then built his “Beta” model. Gerry’s second model is featured in this article. Let’s start building.