•NEW Multi Cylinder Onboard Glow Driver. Similar to the 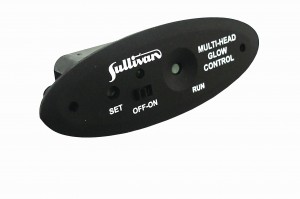 single (M060) and twin (M061) glow driver, it features your choice of quick and easy one button set point programming or automatic operation, so the plug received power at any throttle settings. The set point is stored in memory until changed. The green LED light indicates burned out plugs by flashing on the panel. The unit doesn’t require a Y-Harness, just plug to receiver, throttle servo and to any 1.2V to 12V battery. M/F Micro Deans connectors supplied for battery hook up. Only weighs 56g.