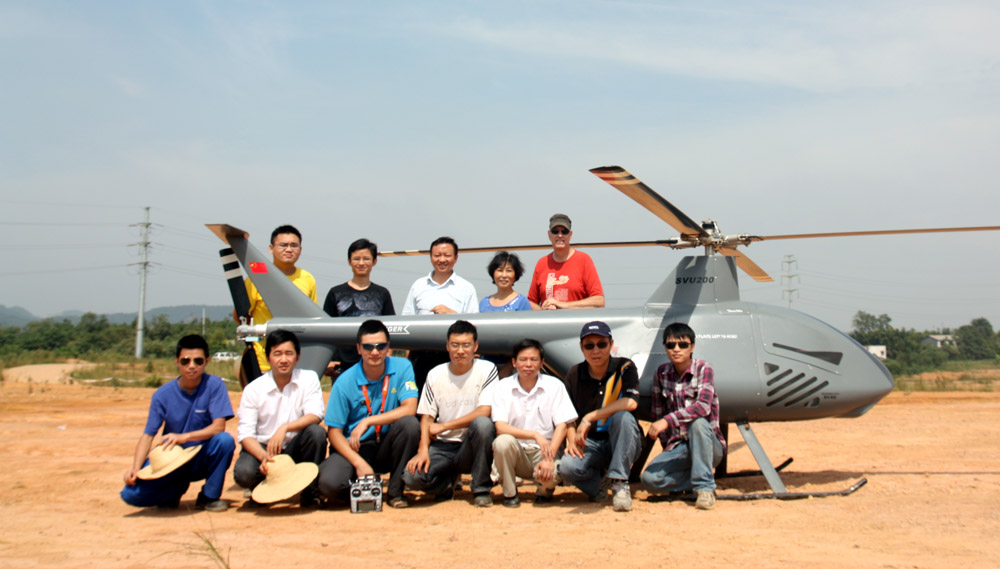 Hunan Sunward Systems’ new SUV-200 is not an existing helicopter converted to a UAV, but was designed from the ground up as a “large helicopter made small,” and not a “small RC helicopter made big,” like most all other UAV helicopters to date.  All parts were specifically designed and built for this project and are unique, using custom-made geared transmissions and tail-rotor drive shafts. The SVU-200 has the same construction as a full-size manned helicopter, along with the same reliability and longevity as a full-size manned helicopter. This detail to quality is due to the fact that today’s electronic payloads can easily be more valuable than the cost of the helicopter.

Designer Dennis Fetters notes,  “Today’s event marked a turning point in the project, were the SVU-200 transformed from a large helicopter flying under ‘human-stabilized remote-control,’ to a fully self-stabilized and self-controlled GPS-navigating autonomous flying vehicle. After this success, my team of engineers and I are proud to be part of a small and elite group of pioneers that has successfully designed a large helicopter specifically for autonomous flight, and completed a successfully predetermined multiple way-point course ending with fully success with the original prototype.”

The SVU-200 benefits from a new rotorhead and control system combination designed by Mr. Fetters that provides for “super-stable” controlling of the helicopter requiring only 1/10th of the amount of computer-stabilizing control inputs as with other large UAV helicopters. The SUV-200 has two internal payload bays, one in the nose and one in the rear of the aircraft, and is also equipped with hard-points and capable of hauling sling-loads, or carry an external cargo/payload pod, and even extended-range tanks with extra fuel for longer mission capabilities. The SVU-200 is powered by a Rotax 582 engine using the special Fetters-designed PEP (Power Enhancement Package) exhaust system, enabling the engines power to be increase from its normal 65 to 78 horsepower, and designed to be capable of lifting up to a 200kg maximum useful load and a top-speed up to 20 km/hr.

Mr. Fetters is one of the only people in the world that has successfully designed and manufactured both helicopters and gyroplanes, which places him in a unique category of designers. He has previously designing over 10 different helicopters and Gyroplanes when he owned his manufacturing businesses in the U.S.A., building over 1700 rotorcraft and shipping them world-wide. He is best known for the famed Air Command series of Gyroplanes manufactured in the 1980’s that revolutionized that industry, and also known for the Mini-500 single-seat helicopter he manufactured in the 1990s.