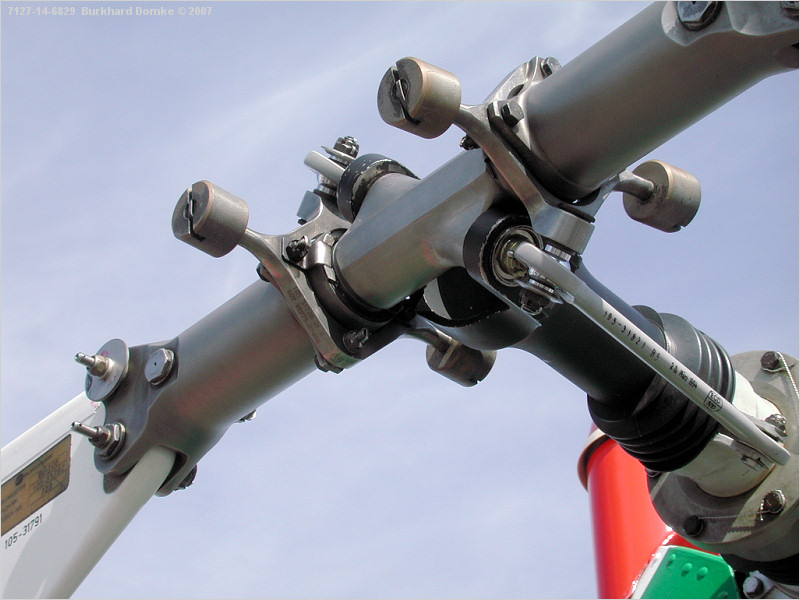 Tail rotor design in full scale helicopters is an on-going science to reduce weight, noise, and power requirements while increasing efficiency and stability. Although these same design parameters are also important to our model helicopters, their effects are a lot less noticeable and can be overcome without seriously degrading flight performance. As an example, if the control system of our tail rotor is not as efficient as it could be, we simply install a more powerful servo to handle the extra loads. This would require a larger battery to power the servo and then possibly a larger engine to lift the extra weight of the larger battery. Since we have no way to measure the efficiency of our helicopters, or their components, and we have more than sufficient power in both our engines and batteries, efficiency is not much of an issue.

Full-Scale Tail Rotor Design – Note in the photo of the full scale tail rotor that there is a center pin in the tail rotor hub that allows off axis tilting of the rotor plane. Years ago some of our model helicopters had this soft mount tail rotor design feature, and I believe it was called a Delta Stabilized Tail Rotor. However, such a design would require a soft mounted “flapping” tail rotor system, which is exactly the design of this full scale helicopter tail rotor. Such a design reduces vibration and stabilizes the tail rotor, but this is no longer used in our models since we only have hard mounted tail rotors that do not allow a flapping motion.