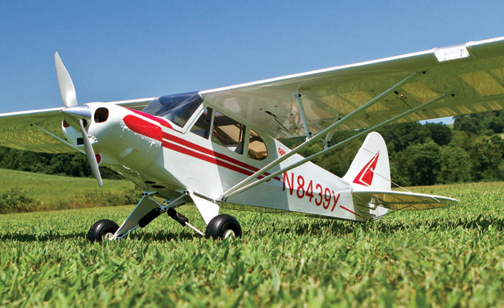 From sport planes and classic civilian aircraft to warbirds and fighters, the tail-dragger configuration, where the little “steering” wheel is in back behind the main landing gear, remains very popular. Though the tailwheel has very little effect on the model’s flight performance, the landing gear configuration does make takeoffs and landings much different from planes with tricycle (trike) landing gear. Here are some of the basics to help tame your tail-draggers and improve your takeoffs and landings.

Depending on the wind, you can land a tail-dragger in two different ways: a tail-down, 3-point attitude (stall landing) or in a nose-down (2-point), wheel landing approach as shown here.

The major difference between a tail-dragger and a trike-gear model is the relative position of the model’s main landing gear with respect to the position of the center of gravity. With a trike, the center of gravity is forward of the main wheels and, when you land the model, it should touch down on the main wheels. The nose then remains level or tilts slightly downward, until the nosewheel comes in contact with the ground. This in turn decreases the wing’s angle of attack and helps to keep the model on the ground. With a tail-dragger, the center of gravity is somewhere behind the main wheels and so after the main gear touches down and the model begins to slow down, the nose slowly tilts upward (the tail comes down) until the tailwheel or tail-skid comes in contact with the ground.

Another reason for the differing set of challenges is because of the relatively narrow track of the main wheels, and the position of the tailwheel so far aft of those wheels. If the tailwheel is allowed to move to one side or the other outboard of the main wheel’s track, inertia then takes over and the tail attempts to circle around to the front end in the classic “ground loop.” With a nosewheel, even on smooth, paved runways, there are no real surprises; but with a tail-dragger, a few eye openers can pop up if you don’t pay attention. Tail-draggers, especially WW I and vintage planes equipped with non-steerable tail-skids, behave much better on grass. The drag of the soft, rough sod actually helps keep tail-draggers going straight after landings. But on a hard, smooth runway, you can easily over-control and cause a ground loop. To keep the tail end aft, you have to be quick with your rudder inputs, maintain directional control, and keep the tailwheel between and behind the two main wheels.

Illustration 1: While traveling straight, toe-in of the two main wheels produces an equal amount of drag friction so the tail stays between the two wheels.

Illustration 2: Should the tail swerve to one side, the angle of the wheels changes, reducing the drag friction of one wheel and increasing it for the other. Toe-in automatically brings the tail back into the proper position between the wheels.

Generally speaking, a tail-dragger’s turning radius is also larger than a trike’s because the main gear is much farther from the tailwheel, thus producing a bigger radius. To keep the tailwheel down on the ground, you use up-elevator. However, you can tighten your turning radius on the ground by releasing the up-elevator, which lightens the tail’s down force. Some WW I planes may even require a bit of down-elevator and a blast of throttle to help swing the tail around.

During takeoffs, torque from the engine and propeller forces will tend to make the model veer to the left. Some right-rudder correction is required to keep the model going straight. Trike aircraft have good directional control: both the nosewheel and the rudder maintain directional control. With the tail-dragger, however, since the tailwheel lifts off the ground before the plane becomes airborne, the rudder alone is correcting for heading.

There are two types of tail-dragger landings: 3-point (stall landings) and 2-point (wheel landings). The type of model you fly and the wind conditions dictate the best type of landing to use. If you have a high-wing, lightly loaded model such as a Piper Cub, you will in most cases be able to flare into a 3-point landing; this type of model is very forgiving and has predictable stall characteristics. In calm weather, the best technique is to come in, maintain straight and level during approach, and then you apply a slight amount of up-elevator to flare for touchdown. Try to extend the flare as long as possible so as the model touches down on all three wheels, the wing is completely stalled and not creating access lift. Remember to let the tail come down on its own. If you apply a lot of up to drive the tail down, it increases the wing’s angle of attach and —if the wing is not fully stalled—it can cause the plane to become airborne again, only to stall more sharply with a harder touchdown.

In blustery or crosswind conditions, a wheel landing is a better choice for lightly loaded models, as you can bring it in at a higher airspeed to maintain positive control for a longer time. With high-performance, more heavily loaded models like a CAP 232 or a Pitts Special biplane, most—if not all—of your landings should be wheel landings. This is because aerobatic models tend to stall more abruptly at lower speeds, and the model’s angle of attack is much more critical during landing. If you flare too early into the 3-point attitude, the wing could stall causing the model to drop in abruptly. With either type of model, use the throttle to adjust your rate of descent, and the elevator to control angle of attack and airspeed.

Most WW II warbirds are tail-draggers, so if you like military planes, learn to use rudder!

To help instill some built-in ground stability to tail-dragger airplanes, many modelers will add some “toe-in” to the main landing gear. This is where the wheels are angled inward as shown in illustration 1. While the airplane is moving forward, the drag of the wheels in contact with the ground is equal, and the model travels straight with the tail positioned between the two main wheels.

AEROBATIC MODELS TEND TO STALL MORE ABRUPTLY AT LOWER SPEEDS, AND THE MODEL’S ANGLE OF ATTACK IS MUCH MORE CRITICAL DURING LANDING.

Should the model start to swerve a little one way or the other during takeoff or landing (see illustration 2), the drag of the misaligned wheel increases. This then applies a slight amount of corrective drag force (much like applying brakes in a full-size airplane) that brings the tail back into a straight position between the main wheels.

Tailwheels are small and add little weight to the airframe compared to the weight of a larger nose-wheel and its steering linkage.

A tailwheel can be attached directly to the rudder or to the bottom of the fuselage and then connected indirectly with linkage to the rudder for steering control. I prefer the fuselage attachment because the indirect connection to the rudder isolates the rudder hinges and steering servo from the jolts and loads associated with taxiing, takeoffs and landings. A simple strap or some rubber bands and a small length of dowel glued into the rudder make connections quick and easy to maintain.

If you haven’t tried a tail-dragger before, talk to some of your flying buddies and see how they do it. Then go ahead and give it a try. Once you master tail-draggers, you’ll be able to fly and land anything. All it takes to be successful is a little understanding and some practice.