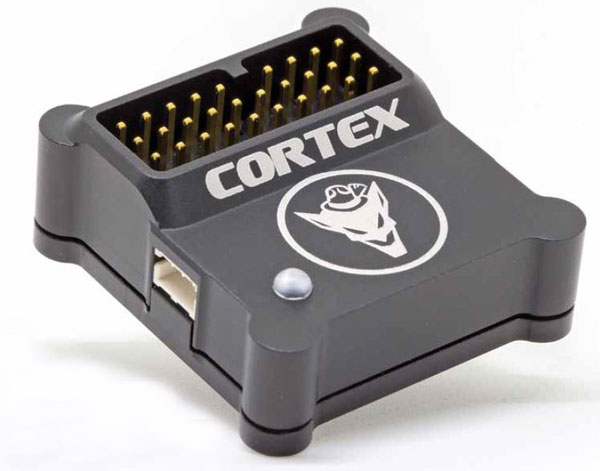 I had an interesting time at last year’s Warbirds over Delaware giant scale event. I was flying my newly completed 1/4-scale Sopwith Camel and was having some difficulty landing the short nosed WW1 biplane. I made three flights each ending by flipping over on its nose and I broke three propellers. Not my best showing. It just so happened, that Danny Melnik of DemonAero.com was on the WOD flightline watching my activities. After a while, Danny came over and offered to install one of his Bavarian Demon Cortex 3-axis flight stabilizers in my Camel. Why would I say no? The Cortex is the not so well kept secret of many top level competition scale, jet and aerobatic RC  pilots.

Made of CNC-machined aluminum, the Cortex module is lightweight, sturdy and very compact. It comes with a wiring harness for connecting to your servos and receiver, thin double-sided mounting tape, a jumper plug and a USB cable for programming using PC software. Compatible with all standard receivers, the Cortex can be used with Spektrum RC, JR 2-satellite receivers, Futaba S-Bus, and the Jeti PPM systems. In general the Cortex works with up to five control channels making it ideal for my Camel, which is set up with two elevator and two aileron channels mixed in pairs. Danny advised me that the Cortex must be mounted securely and aligned parallel with the fuselage’s centerline. 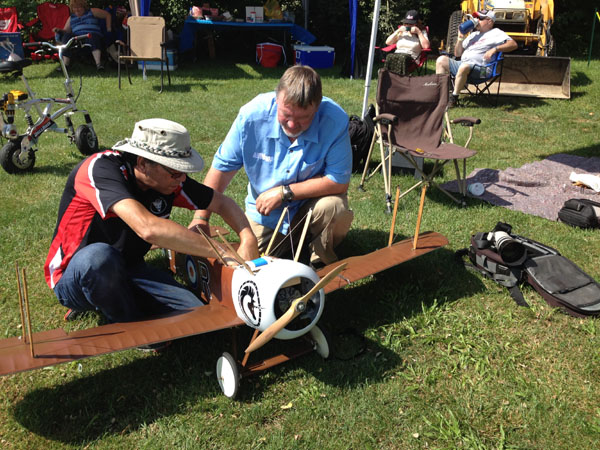 (Above) Danny Melnik of DemonAero.com installed the Demon Cortex in my Camel right there in the pit area at the WOD event.

The module has to installed fairly close to your receiver so you can use the included wire harness to make all the servo and receiver connections. The factory-set orientation for the Cortex is upright and with the servo ports positioned toward the front of the plane.

The radio connections are a piece of cake, simply unplug a servo lead from your receiver and plug the (A) lead into its place. You then plug that servo lead into the (A) port on the Cortex module. Then do the next servo uses the (B) lead/port and so on. 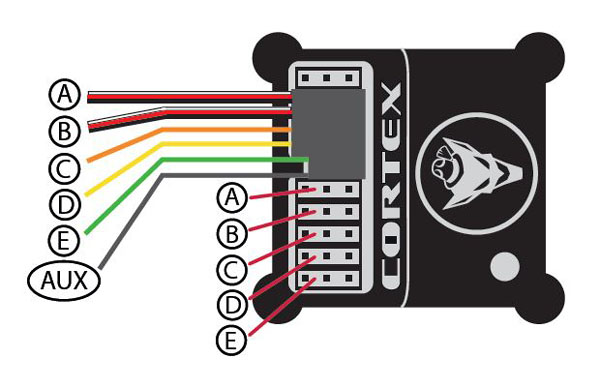 The Cortex is controlled with the auxiliary channel of your choice and I used my 3-position GEAR switch to switch between two separate stabilization settings with the center position being the off position. The Cortex Aux lead is plugged into that receiver channel port. Because of my Camel’s tight radio compartment, Danny used his laptop computer and a mini USB cable to reprogram the Cortex so the connection ports faced the left side of the fuselage. This allowed the wire leads to clear the pushrods passing overhead. Again, this took only a few moments and we were good to go. 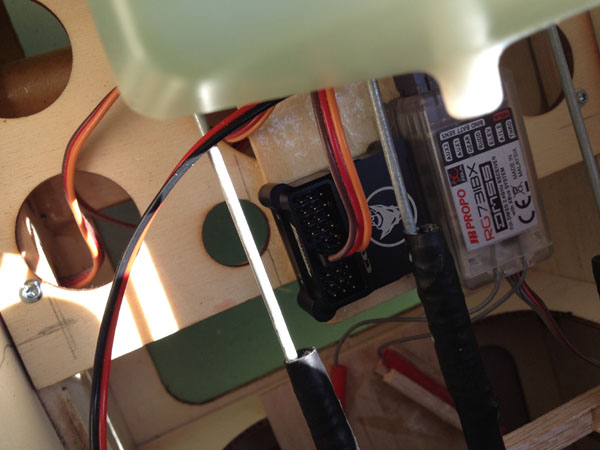 (Above) here the installation is just getting underway.

The gains for the Cortex gyro are adjusted by changing the endpoint values of the auxiliary channel. Negative values place the Cortex in the Normal mode, indicated with the LED turning yellow.  Normal mode cancels out flight disturbances from wind gusts. A positive endpoint value places the Cortex in the Hold mode for 3D aircraft to improve hover maneuvers and is indicated by a green LED. In both flight stabilization models the larger the endpoint values are the higher the stabilization effects will be. For the center position, a zero endpoint setting turns off the Cortex stabilization indicated by a red LED. As my WW1 Camel is far being a 3D flyer, we set up the two modes as various gains (with different negative values), so both banks are Normal flight modes providing different amounts of stability. The unit does not know or care what channel is used to switch the various stability modes, so it can easily be tailored to your specific airplane. You can also mix your Cortex channel with your flight mode switch so it automatically adjusts to your needs. High Gain with flaps and retracts lowered for landings, etc. 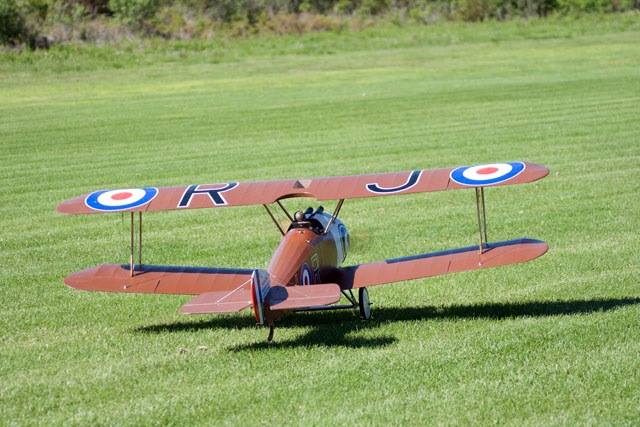 Once the Cortex is installed in your plane, you do have to alter your start up procedure slightly. First switch on your transmitter without worry about the Cortex gyro’s switch position. Next, without touching or moving your model, switch on your receiver. Wait for it to bind to the transmitter and then watch for the control surfaces to “bump” a couple times. This indicates that the Cortex is active and it has identified and set its neutral positions. Now when you move the Gear switch you will see the LED on the module switch colors for each of the three positions. 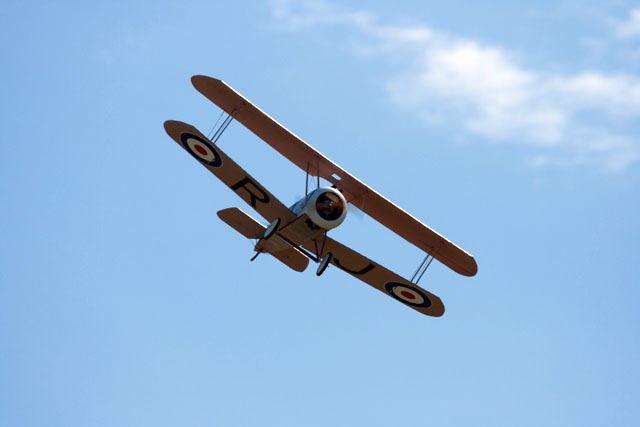 For the first takeoff, I switched the Cortex off and got airborne unassisted. Once I gained some altitude I switched to the  Normal (Green) mode and waited for something to happen. The Camel simply kept flying along but now felt like the wind gusts had been switched off. It tracked straight and level and the wings barely moved in roll. I was also pleased to see that the elevator was also doing a great job keeping the model in level flight with no pitch trim changes.  Nothing else happened except I really enjoyed the flight. At this point I had only about 6 or 7 flights on the Camel and this was by far the smoothest. With the Cortex activated the only noticeable difference in feeling was like it had a good amount of exponential dialed in. Switching to the second (Yellow) Normal mode setting was just as smooth with a bit more stabilizing effect. 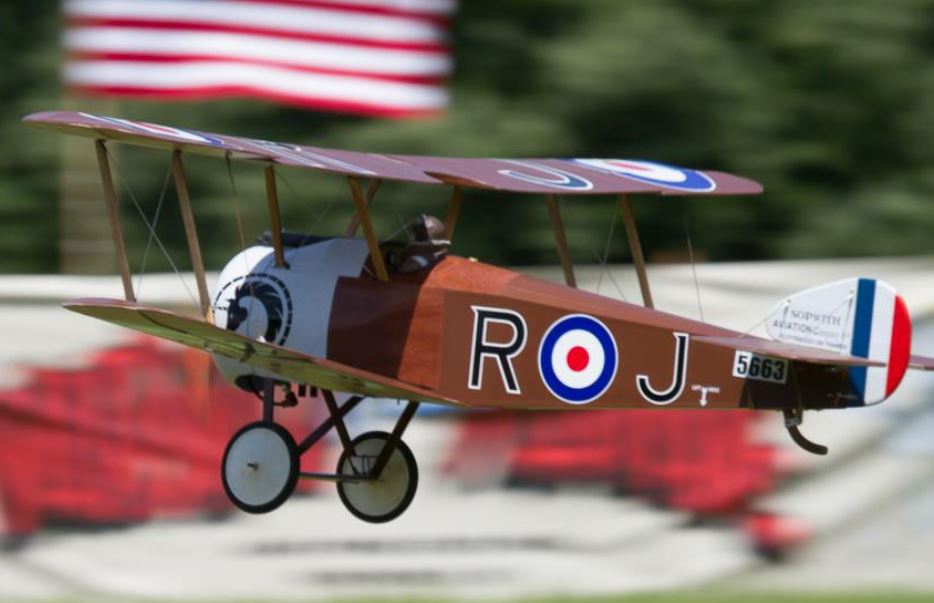 For my first assisted landing, I left the Cortex in the green Normal mode. Setting up for landing the Camel  locked in nicely with virtually no wingtip drops or dips from the wind. This was especially impressive as there was about a 15-degree crosswind blowing. I was able to easily touchdown with a good straight rollout. Up to this point, all my landings had ended in a tail-dragger dance and nosing over. No walk of shame this time.

Note: when you switch on the Cortex, should your aircraft start to osculate back and forth in roll or porpoise up and down in pitch hunting for center the gain is set too high. Simply switch off the Cortex, land your plane and lower the endpoint values a bit and try again. It is best to fine tune the setting on a relatively calm day.

Bottom line, the Bavarian Demon Cortex will definitely smooth things out. For a normal fixed-wing scale flyer, the Cortex 3-axis stabilization, is like an off switch for the wind! I love it and so will you.