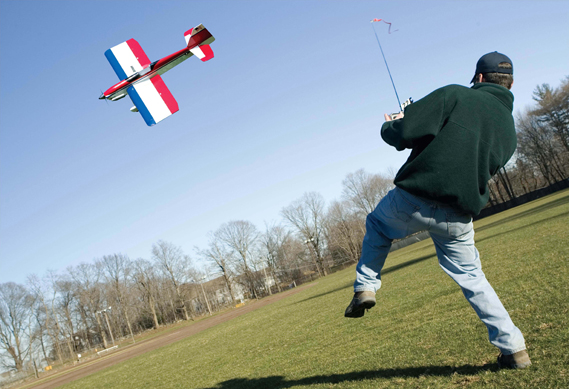 There are many misconceptions, especially among non-fliers about stalls. The first is that a stall is related to engine failure. An aerodynamic stall has nothing to do with engine power, and the plane will not fall out of the sky if an engine quits. Another misconception, as often seen in Hollywood movies, is that the plane will enter a dive, become uncontrollable and require superhuman strength to recover. Since the dawn of aviation, pilots have been stalling their airplanes both intentionally and unintentionally. It’s important to understand stalling and how the airplane reacts during a stall to avoid the dreaded stall accident.

ANGLE OF ATTACK
Only one thing causes a stall: exceeding the wings critical angle of attack. The angle of attack (AoA) is the angle formed by a line drawn between the wing’s leading and trailing edges (chord line) and the relative wind. The term “relative wind” denotes the direction of the airstream relative to the airplane. For instance, during foreword horizontal flight, the relative wind is horizontal and rearward. The direction of the relative wind of an airplane in a vertical dive is upward and vertical. The amount of lift generated by a wing is dependent on the AoA. As the AoA is increased, the wing provides more and more lift.

As you increase the AoA, a point will be reached where the airflow can no longer conform to the airfoil’s surface. The airflow becomes turbulent and doesn’t produce any lift, and drag increases greatly. This point is called the “critical angle of attack” and is typically between 12 and 15 degrees for most planes. Without lift, the plane is no longer flying and is at the mercy of gravity. When we say a wing is “stalled”, we mean that it has exceeded the critical angle of attack.

STALL AWARENESS
Most of the planes we fly have only one way to control the AoA, the elevator. An airplane can be stalled at any speed and at any attitude. If the elevator is yanked back and causes the wing to exceed the AoA, a stall will occur even if the plane is in a full-power vertical dive. A more common scenario is during an approach to landing: as airplanes slow, less lift is generated (lift is a function of the square of the airspeed), and the pilot pulls back on the elevator to increase the AoA to compensate for the reduced lift. If you overdo it and pull back too far, the wing will stall, and the nose will drop. If you are close to the ground, you may not have enough altitude to recover.

Stalls can also occur during turns. A plane turns by banking with the rudder or ailerons. The plane in a bank produces less vertical lift because the lift force is at an angle to the vertical (lift acts perpendicularly to the wing). To make up for the reduced lift, the pilot pulls back on the stick to maintain altitude. Once again, if the AoA is exceeded, the wing will stall.

When flying full-size aircraft, there are many cues to alert you of an imminent stall. Most planes controls will react more slowly or “mushy” and the airplane’s attitude will be high relative to the relative wind. Wind nose will diminish, and the airplane will vibrate or buffet. And if you miss all of these clues, full-size planes feature stall-warning horns. But RC pilots must rely strictly on visual cues; you can determine when the controls become mushy because you will observe a distinct lag between control input and when the plane responds.

How an airplane behaves during a stall depends primarily on its wing platform shape. Let’s look at the three typical shapes and their stall characteristics.

Rectangular wing. The stall begins at the wing’s inboard area and progresses outward. In this case, the plane descends straight ahead, and the ailerons are still effective. This is the easiest stall to get out of, just relax the elevator, and with enough altitude, the plane resumes normal flight.

Tapered wing. Planes with highly tapered wings stall at the outboard section first. The ailerons therefore become ineffective. If one wing panel stalls slightly before the other, the wing will drop quickly, and a snap roll will result. This is also referred to as a “tip-stall” and can be caused by the wing’s incidents being slightly different between each wing panel or a slight application of rudder and/or aileron. To recover, you must “unstall” by relaxing the elevator and pulling out of the resultant dive.

Trainers typically have rectangular wings for easy stall recovery. Many also have small elevators to reduce the elevator’s authority, and that makes it more difficult to stall in the first place. There are also different design techniques for modifying stall characteristics. A common technique is to use washout (wing twist); it puts the wingtips at a smaller AoA than the inboard section to prevent tip-stalls.

You may wonder why all planes aren’t designed to be stall resistant or to have gentle stall characteristics. Tapered and elliptical wings have much better high-speed and roll characteristics, and many aerobatic maneuvers rely on stalls. In a snap roll, you deliberately stall one wing half. The other wing is still lifting, so the plane rolls very quickly. A snap roll is initiated by giving full-up elevator and applying rudder. The up-elevator brings the wing close to the critical AoA, and rudder application makes one wing panel stall.

Every airplane snap rolls a different way. Planes with rectangular wings typically don’t enter and exit snap rolls cleanly. It takes them a while to enter the snap and to recover from them. This makes it difficult to start and stop the snap roll on command. Some will not snap roll at all. On the other hand, tapered-wing aerobats are easier to snap roll. Spins are also easier to do with tapered-wing aircraft.

STALL RECOVERY
The only way to recover from a stall is to get the AoA lower than the critical angle. Since the elevator controls the AoA, you have to push on the elevator stick (assuming you aren’t inverted). This is especially hard to do during a landing approach. If you see your plane heading for the ground, all your instincts tell you to pull up, but will only ensure that the plane will remain stalled. The best way to avoid this is to get to know your plane and its stall characteristics; take the plane up high, and practice stalls and stall recovery. Make a mental note of how far back the stick is before the plane stalls. Adding power during the stall shortens recovery time as the prop provides additional airflow over the wing.

Another common occurrence is the stall and resultant snap roll during a turn from base to final. The pilot is flying slowly and the combination of excessive up-elevator and aileron and rudder input are exactly the control inputs for a snap roll. This happens quickly, and without enough altitude to recover, the plane does a snap roll into the ground. By practicing at altitude and having good stall awareness, this can be avoided.

No matter which type of stall you find yourself in, straight-ahead stalls, turning stalls, power-on or power-off stalls, spins or snap rolls the recovery is the same. Reduce the AoA, add power and return to straight and level flight. The best defense against unwanted stalls is understanding why and how they happen.

The wing’s planform has the greatest effect on the stall pattern. 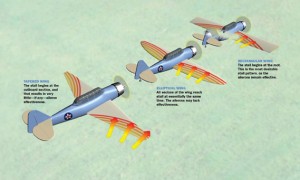