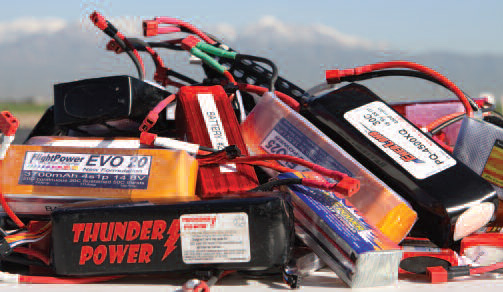 Batteries are an ever-changing technology that we use every time we fly our model planes. Whether it is to simply power our flight gear or to run our motor and flight gear, batteries are always a factor to be considered when building our planes. Ten years ago, not many people were paying much attention to what battery packs they were using. For flight packs, we used either 4- or 5- cell Ni-Cd or NiMH batteries and that was about the limit of options we had. To power our planes, we used NiMH packs for the most part and for more powerful motors we added cells. The major downside to this was weight. At 1.2 amps per cell, it took quite a few cells to create the energy we needed to fly our planes. Add to this the fact that these chemistries were not very light cells and things got heavy fast. In the past five to 10 years, all has changed. The use of LiPo batteries is commonplace for most modelers. There is also a whole new group of chemistry options. We are now seeing a lot of Li-Ion, A123, LiFePO4, Li-Manganese, etc., for flight packs. All of this has brought on a whole new technology that we, as modelers, need to be familiar with. For the purpose of this article, I’ll be using LiPo cells as my examples. LiPo cells have a resting, or nominal, voltage of 3.7 volts. This is the voltage that the cells will reach when they are charged and have not had a load placed on them for 2 to 3 minutes. When fully charged, the resting voltage will be slightly higher.

What the numbers mean

First, let’s talk about common acronyms and nomenclature for battery pack configuration. This is one of the more confusing aspects of the new era of batteries that we are now using. When you look at battery pack specs, either on the Internet or on the label of a pack, you will see a series of  numbers and letters. Examples of this would be 3s1p, or 3s2p. This label will always have a number followed by an s and then another number followed by a p. The s denotes series. When you place batteries in series, the capacity, or mAh of the pack (we will get to this later), stays the same and the voltage is multiplied by the number of cells. For instance, in the above example of 3s1p, the pack would have a resting voltage of 11.1V (3 x 3.7V). Using this information, a 2s1p pack would have a resting voltage of 7.4V (2 x 3.7).

The next letter in the pack configuration descriptor is p. The p stands for parallel. When placed in parallel, the battery’s voltage is not affected, but the capacity (mAh) is multiplied by the number that comes before the p. For example, if you had a battery that was 1000mAh and had a pack description of  1s3p, your pack would have 3 x 1000mAh cells.

Using this information, if you had a pack that was 1000mAh and the pack description of 3s2p, this would mean that your battery pack consists of two sets of 500mAh cells connected in parallel to make the 1000mAh capacity. In the above example, I referred to the capacity of a battery as mAh. mAh stands for milliamp hour. 1000mAh is equal to one amp hour. For example, a battery that is rated at 3000mAh can be discharged at a rate of 3 amps (or 3000mAh) for one hour before being completely drained. By this logic, if you drained the same 3000mAh at 6 amps, the pack would be completely drained in one half hour.

The next term that is very important to understand when it comes to batteries is the C rating. Batteries carry c ratings from 1C all the way up to 45C these days. The C rating is basically how fast the energy of the battery can be released from the battery. If a 3000mAh battery has a 1C rating it can be discharged safely at 3 amps. If you have a similar 3000mAh battery with a C rating of 10C that battery can safely be discharged at 30 amps. The same battery at 20C can be safely discharged at 60 amps, etc. Keep in mind that LiPo batteries will do their best to keep up with the application from them. If you put a 20C battery in a plane that is pulling 30C, the pack will try to supply 30 until it is drained or smoke comes out. Don’t  ask how I know this…I just do.

Now that you have a better understanding of the nomenclature used to describe the packs that we use, let’s talk about charging. Charging is a concern especially when it comes to LiPo batteries. As a rule, you should not charge a LiPo battery at more than 1C. This means that if you have a pack that has a 2200 mAh rating it should never be charged at a rate higher than 2.2 amps. This is a general rule.

There are chargers on the market that can charge at higher C ratings through the act of balancing during the charge cycle. What this means is that while the battery is being charged, the charger is monitoring the voltage of each individual cell and making sure that they are all being charged the possibility of ruining a pack while charging at higher rates.  Before trying this, make sure that the charger you are using is capable and you supervise your batteries while charging.

This also brings up the topic of using a quality charger. Chargers greatly range in price and quality. Using some of the higher-end chargers like the Cell Pro 10S or Thunder Power 1010 can significantly increase battery life through the use of balance charging.

Another thing that people rarely consider when using the new battery chemistries is calculating for a “buffer” concerning how much of the capacity you use. What I mean by this is that if you have a plane that will be drawing 10 amps and you want to get 10- minute flights out of it, you will not want to use a 1000mAh pack. Sure, the math adds up, a 1000mAh pack will put out 10 amps for 10 minutes and will then be fully drained. The problem is that the LiPo and Li-Ion pack do not like to be fully discharged. Doing so may damage the pack. This can lead to a pack that doesn’t perform as well or stops working all together. Instead, you would want to use a 1250mAh pack and fly for 10 minutes. This will leave a “buffer” of about 20 percent after each flight. 20 to 30 percent is a good number to shoot for. This will keep the battery in better health and will result in more longevity of the pack. On the same note, it is also recommended that the battery be “broken in” when it is new. To break in a pack, charge the battery at a lower C rating, such as .5C when you first get it. Also, try not to push the battery to its limits in initial flights. This can also help extend the life of your pack.