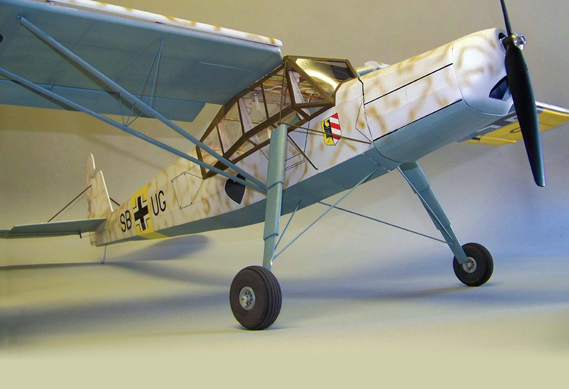 The “squiggle” pattern was applied to the Storch over white Litefilm using Model Master Enamel. After the graphics were applied, a light dusting of Krylon Satin Clear was used to dull down the shiny finish produced by the Litefilm. The bottom color was sprayed with Model Master Enamel using the Paasche H1 air-brush on the fuselage and stabilizer, and the Central Tool detail gun was used to apply the color to the bottom of the wing.

With the new generation of lightweight scale electric-powered park flyers, most color schemes are basically limited to the colors of the iron-on films. But for those of us who like a finish that’s maybe just a little bit out of the ordinary, the only real option is to paint our models. If you’re in this group, there’s an easy way to get some terrific results using commonly available hobby paints. After much experiment with different paints and techniques, my method lets you easily paint a warbird in authentic colors, and it even allows for some natural weathering effects in the process. Here’s how it works!

The first and most important part of the process is surface preparation. If you’re re-finishing an ARF, you can stick with the original cover, or strip it and recover using either Coverite’s Microlite from Tower Hobby (towerhobby.com) or Doculam available from Manzano Laser Works (manzanolaser.com) Doculam is a clear, iron-on film used for protecting documents. It works great for covering small- to medium-size models as well. When I use Microlite as a base, I prefer silver since when the paint gets chipped, it looks like the underlying metal (warbirds) or the silver dope used on fabric-covered components. Once the covering has been applied, the next step is to clean the surfaces. For the paint to stick, the model has to be squeaky clean.

Step one is a good rubdown with lacquer thinner or acetone to remove the oily residue left by the film covering’s manufacturing process. The first cleaning leaves behind a frosty residue, which then you remove using white vinegar. At this point, the surface is absolutely clean, and should not be handled with your bare hands. I wear either lint-free cotton or latex gloves to avoid my oily fingerprints that can adversely affect the paint’s adhesion and show in the finish.

This process is really quite simple and can be accomplished by brushing, with aerosol colors, or the paint can be applied with an airbrush or a small automotive trim gun. Now, the downside to painting film is that paint adhesion is marginal at best, but for warbirds, that’s not all that bad. Remember, warbirds had a hard life and their paint jobs were prone to chipping in high-wear areas such as the wing’s leading edges and around the cockpit entries.

If you aren’t set up with spray paint equipment, Model Master Enamel is available in aerosol cans and comes in a huge variety of military colors. It’s very easy to use and works well for most applications. I do prefer using an airbrush since the selection of colors is much greater, and more intricate color schemes can be applied. For those who prefer to brush paint, Model Master Acryl colors are far and away your best choice.

For soft-edged camouflage markings, no masking is required, but for hard color separation lines, the edges that separate various colors should be masked with very low-tack tape. Remember, the paint doesn’t stick too well to the film, so I take the low-tack tape and stick it to my pants and pull it off to reduce its stickiness before I apply it to the model with very light pressure. Spray on the paint with several very light coats so that it doesn’t puddle up and crawl under the tape. This can leave an ugly jagged line.

When the paint has dried, carefully remove the tape. If it looks like you’re going to get a lot of “chipping,” wet the masking tape with water to help reduce its tackiness as you remove the tape. If some chipping does occur, touch it up with a brush after the mask has been removed.

Available from most local hobby shops, there are two kinds of paint that can be used: acrylics and enamels. I’ve used both in different applications with excellent results, but for the best results you should use flat or satin colors. My personal favorite is Model Master Enamels; the water-based Model Master Acryl will do nicely as well, though its adhesion isn’t as good as with the enamels. Another advantage to enamel is that the military colors have no Ultra-Violet (UV) protection and will fade nicely in the sun. Over time, this exposure to the UV produces a very scale-looking weathered appearance.

Acryl colors, on the other hand, hold up nicely, so that a natural weathering process won’t occur. On models where the paint doesn’t cover the film completely, Krylon Satin Clear can be used to dull the finish of the exposed film for a more scale-like appearance.

Now that the model is painted, the masking removed and the chipping touched up, the model’s finish can be “aged” by adding a bit of shading or fading. An easy way to apply shading is to add a few drops of black or dark gray to the original color and spray it with the airbrush around the outer edges of the panels. This adds depth to the finish. Fading is done the same way, but by using white or light gray to lighten the color. You then spray it on to the center areas of the panel. For old linen-covered airplanes, the cover can also be shaded using the same techniques while using a darker shade of the buff-colored film. By applying this over visible structures, it helps reproduce the “yellowing” that’s common with those old airplanes.

Finally, if you want to add some “scale paint chipping,” simply touch a piece of high-tack tape to the area where the chipping effect is desired to actually pull the paint off. This exposes the bare silver film covering beneath.

As with anything else, these techniques require some practice to perfect. At first it is easy to go overboard. Avoid the temptation of using too much weathering and you’ll have a very nice scale finish on your film-covered model. As you learn the basic techniques, your models will begin to take on a very scale-like appearance with only a small amount of effort.   -BY PAT TRITLE