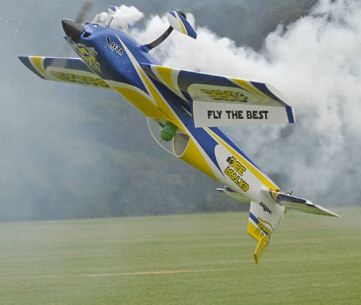 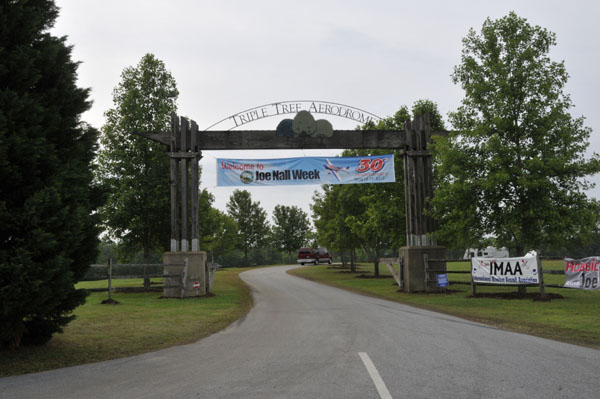 This year is the 30th for the Joe Nall.  Woopee!……we are celebrating!  Looking back over the years it all started when Pat Hartness and his good friend Kirby Mckinney, who were passionate about giant scale airplanes, decided to host a fly-in.  The IMAA (International Miniature Aircraft Association) was just 2 years old then.  The very first meet happened on the Hartness estate, a week after Mothers Day in 1983. It was called the Greenville Giant Scale Meet and was held at Hartness field. Only 13 showed up, but that didn’t stop them.  In 1986, when I first attended, a good friend by the name of Joe Nall came each year to help out as MC.  Joe lost his life in 89 and Hartness named the event in honor of his dear friend. The famous Sat. night BBQ, now held on Fri. night, was held then in the Hartness mansion backyard, sometimes at Hartness International factory or the field hanger, with always a bluegrass band for entertainment. Kirby always maintained that every fly-in shall have a BBQ.  Today’s BBQ serves 1,000 people in 22minutes…..excellent!

The event kept growing and nearing the end of the 90’s ran into some troubles.  The roof of the Bosh & Lomb building, across the street, was the target for a few errant airplanes bringing on some complaints from them. Neighbors started complaining of the noise and airplanes were flying too high, infringing on the landing air space of the local Greer airport.  It was time to move. A few years earlier Hartness had purchased 450 plus acres of land from Ray Brown, a real-estate land developer, in Woodruff,SC.  He leased some heavy earth moving equipment and began building (himself and Eddie Clarke) an earth dam to form a 80 acre lake along with a runway which has now been extended to 6,000 ft. Quite a task, but Hartness had a vision and strove to achieve it.   The Nall was moved to Triple Tree in 2000 and the first event there was rather dusty and rough around the edges, as I remember.  However, each year we saw improvements.  To further improve the crowd effect, the main venue was broken up into 5 with 3 buses provided to shuttle the people back and forth.

In 2009 we lost our dear friend Kirby McKinney and the Nall in 2010 was dedicated in his honor.  We all miss him.  In recent years the AMA has taken a more active role at the Nall having yearly meetings at the hanger. Of course, the Nall has always been a AMA/IMAA event. In 2011 the AMA designated Triple Tree as an International Aero Modeling Center and presented Hartness with a marker.  The Confederate Air Farce, Chapter 94, has now become the Triple Tree Aviators and the Joe Nall became the Joe Nall Week.

This year another venue was added, U-control circles, now making it 6.  Hartness has finally overcome the legal hurtles and Triple Tree is now in a trust, ensuring the Nall, and other model and full scale events held there, will continue for many years to come.  What a wonderful legacy, Pat, and grateful thanks from all of us.

One of the goals of the Triple Tree principals was to reach 1,000 in registration.  Well. I am happy to report that it was well over 1,100 this year.  Unemployment and high gas prices did not have an effect on those out for a good time or maybe a pleasant week’s vacation.  Most likely the Nall will grow again next year so why don’t you come and be part of it as I have for the past 26 years.  You will have the best time of your life with all your friends at Triple Tree.  See you next year!

Text and Photos by Jerry Smith

15. DSC1887,1891,1894  Thayer Syme flew his original design Daddy-O 525 on floats. Thayer says the model resembles an old time racer.  Other sizes are in development by Thayer.  What a great looking model, especially on floats and the way he flew it.

18. DSC1954  Pair Klon and Mark Weiss hold up the little electric U-control, Stevens Aeromodel Ring Rat, that many flew at the Nall.  Even I took part, fearing to be somewhat humble, but did get it safely on the ground.

19. DSC1952  Allen Brichause cranks the Fox 35 while Harold Bitner holds the old Ring Master.  There was quite a bit of interest at the newly added U-control venue.

23. DSC2068, 2070, 2072  Bob Komro, winner of the Bob Smith Award, flew off the lake with this gorgeous L4 Cub on floats.  How real is real?  Well this one could fool you when in the air.  Bob did all the work on the undercarriage and the floats himself.

24. DSC2229,  One of the Jet Gliders spinning down during the noon demo encountered a Sun Dog, on the right.  What is a Sun Dog?  They are formed by the sun hitting ice crystals, sometimes called diamond dust, at a 22 degree angle at high altitude causing a streak of color in the sky.  The red color is closest to the sun.  Now you know.