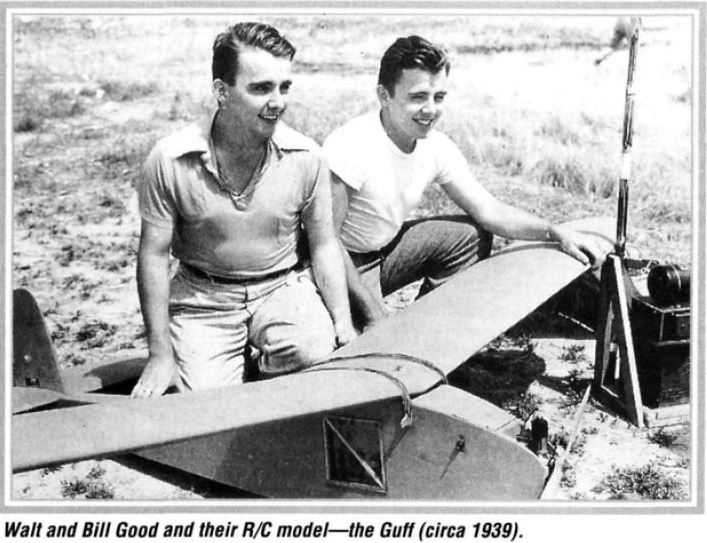 With our recent review of the new Junior Retro Series Park Flyer from Durafly, I had mentioned it had taken its styling cues from vintage old-timer free flight and early RC models. We had a few emails come in asking for more information. So, I dug up this informative article about the beginnings or RC airplanes written by Frank Gudaitis. We’ve come a long way baby! Check it out.

The very First example of radio control was demonstrated in New York City in 1898. Its inventor—Nikola Tesla—was a 43-year-old immigrant who was duly awarded U.S. Patent no. 613,809 on November 8, 1898. It was only one of 113 U.S. patents that this prolific genius received during his lifetime. Many electrical engineers and historians regard his basic inventions as the foundation of the 20th century as we know it. In the decades that followed, the military and its suppliers attempted to implement Tesla’s work in various R/C projects—including boats and aircraft—without very much fanfare. 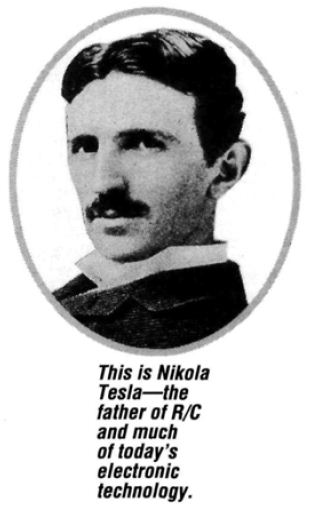 By the middle of the 1930s, miniature airplanes were just beginning to be powered by very small gasoline engines. An R/C contest event was even scheduled for the 1936 model aircraft Nationals in Detroit. It was a little premature; not one entrant showed up! The following year however, must be regarded as the true beginning of R/C.

Several men who were active in amateur radio became interested in the possibility of controlling model planes by radio. Two of these early pioneers were Ross Hull and Clinton DeSoto. Both were officials of the American Radio Relay League (ARRL), which is the governing body of ham radio operators. Hull was a very gifted radio designer whose achievements include the discovery and eventual explanation of the tropospheric bending of VHF radio waves. Since his youth in Australia, Hull also happened to be an avid modeler. Hull and his associate DeSoto successfully built and flew several large R/C gliders in the first public demonstration of controlled flights. Their sailplanes made more than 100 flights. (See the January and August ’38 issues of Model Airplane News). Tragically, Hull died one year later in 1939 when he accidentally contacted 6,000 volts while he was working on an early television receiver. DeSoto died a decade later. 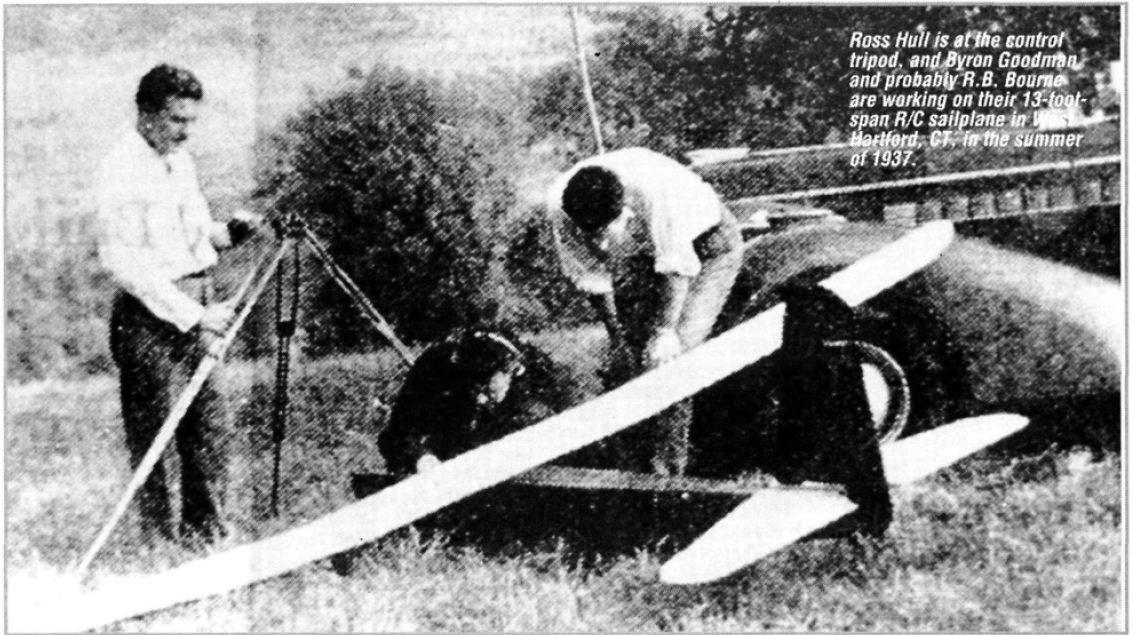 The 1937 Nationals R/C event attracted six entrants: Walter Good, Elmer Wasman, Chester Lanzo, Leo Weiss, Patrick Sweeney and B. Shiffman. Lanzo won with the lightest (6 pounds) and the simplest model plane, although his flight was a bit erratic and lasted only several minutes. Sweeney and Wasman both had extremely short (5-second) flights when their aircraft took off, climbed steeply, stalled and crashed. Sweeney, however, had the distinction of being the first person to attempt an R/C flight in a national contest. The other three entrants weren’t able to make any flights at all. 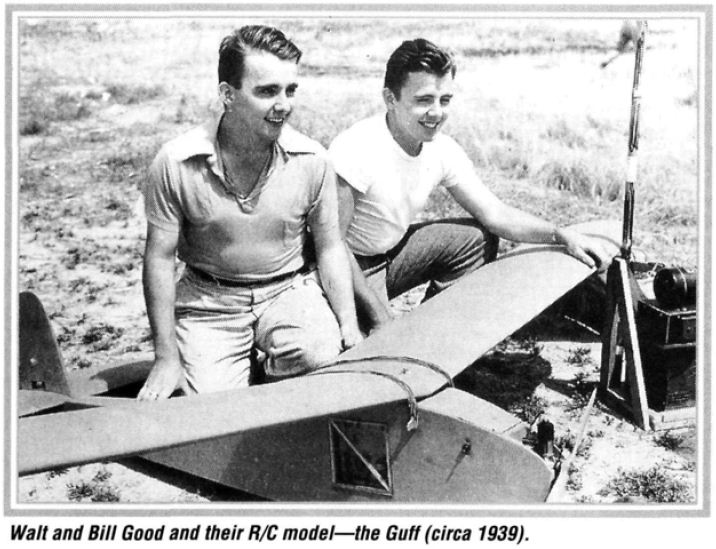 BIRTH OF THE REED

One of them—Weiss—was an 18-year-old aeronautical engineering student who had constructed a very large, 14-foot-wingspan RC model. He and an electrical engineering student—Jon Lopus—had devised a very sophisticated, innovative RC system consisting of six tuned reeds that reacted to audio tones. The reed-control system became widely accepted in the 1950s. During the 1937 Nationals, however, Weiss wasn’t able to start his plane’s Ferguson twin-cylinder engine. He went on to successfully operate an avionics manufacturing company. 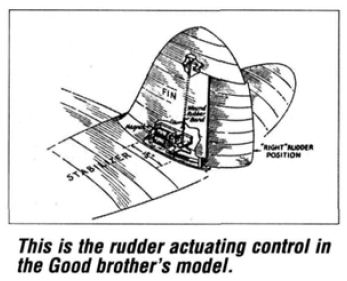 The 1938 Nationals were once again hosted by the “Motor City.” Although the R/C entry list had grown to 26 entrants, only five fliers showed up on the field. One of the newcomers was DeSoto, who entered a 14-footwingspan, 25-pound, stand-off-scale model of a Piper Cub that was powered by a Forster twin-cylinder engine. Each of the four separate receivers on board used a gas-filled Raytheon RK-62 tube in a super regenerative circuit to activate its own sigma relay. His plane placed second, but it isn’t clear whether or not it actually flew. Oddly enough, these first contests required only that contestants demonstrate their R/C systems in a static position on the ground to win a runner-up award. 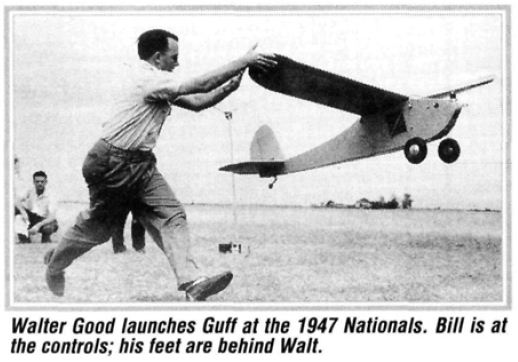 Walter Good was the only contestant who attempted a controlled flight in the face of the 20mph winds. Even though it ended in a crack-up, Walt was awarded first place. A truly convincing demonstration of R/C flight by a powered miniature aircraft would have to wait until the following year. Eleven R/C fliers showed up at the 1939 Nationals at the Detroit Wayne County airport. For the first time, a 100-point system was adopted by the judges. Points were given for craftsmanship, actual R/C operation in a static preflight mode on the ground and a variety of flight maneuvers. 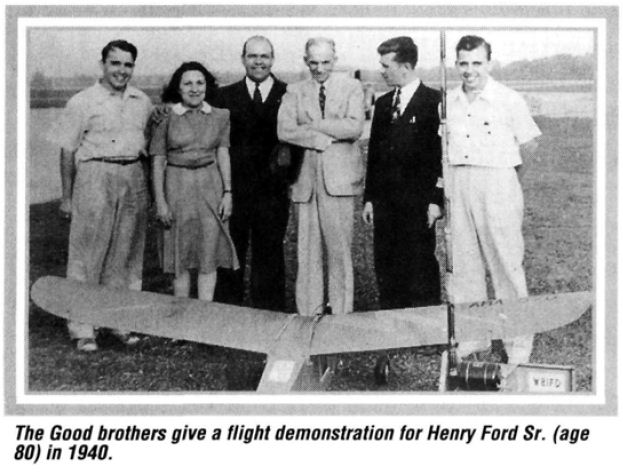 That was a rewarding year for Walter and William Good—23-year-old twins from Kalamazoo, MI. Bill was a licensed ham-radio operator with the call letters W81FD. Their aircraft—named K-G—was a slightly modified, high-wing monoplane.

Their radio and control mechanisms were the essence of simplicity. At a time when all of their competitor’s planes carried receivers with 3- and 4-tube circuits, the Good brothers’ radio receiver was a one tube affair with a minimum of electrical components. Their homemade relay was so sensitive that it could be activated by a current change of 1/2 milliamp! They also designed and made their 1 -ounce, rubber-band powered escapement mechanism. Before going to the Nationals in 1939, the two brothers had accumulated over 60 controlled flights in southern Michigan. Their diligent efforts paid off with a first-place score of 89 points; the second-place winner scored only 11 points. The Good brothers repeated their first place win in the 1940 Nationals and once more after the end of WW II, in 1947.

Their historic R/C model airplane, which they affectionately named the “Guff,” was presented to the National Air and Space Museum in Washington, D.C., in May, 1960, where it can be seen today. Both brothers continued their education and subsequently earned doctorates in physics. After pursuing careers in electronics research and teaching, they retired, but they’re still very active in electronics. Walt lives in Florida, and Bill resides in upstate New York. They communicate constantly with each other using their ham radios. 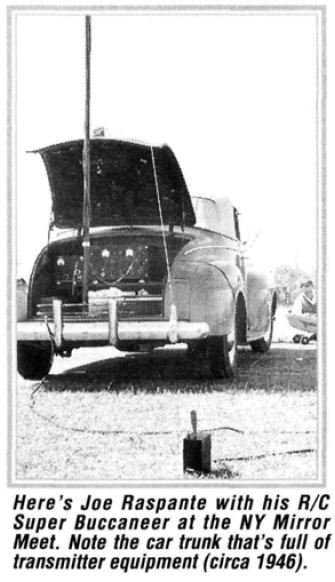 No story on the early days of R/C would be complete without recognizing the work of Joseph Raspante. Unlike most of the early pioneers of R/C, who were basically model airplane builders teamed up with ham-radio specialists, Joe Raspante was a superb designer and builder of early gas models as well as a competent electronic technician. His R/C system was unique in that he used a telephone dial to select various control functions. He placed second in the 1939 R/C Nationals and third in the 1940 event. Raspante was generous, and he shared his knowledge with young builders in years that followed. Walter Good remembers that when thieves stole his brother’s R/C transmitter from their hotel the day before the 1940 Nationals, Raspante offered the use of his own transmitter. This gesture was especially meaningful, because the Good brothers had defeated him in the 1939 Nationals. Raspante finally won the first place he yearned for at the 1946 NY Daily Mirror contest at Grumman airfield. It was my privilege to see him fly there. With the advent of the transistor and the integrated microcircuits, today’s R/C builder hardly has any of the frustrations of the early pioneers. 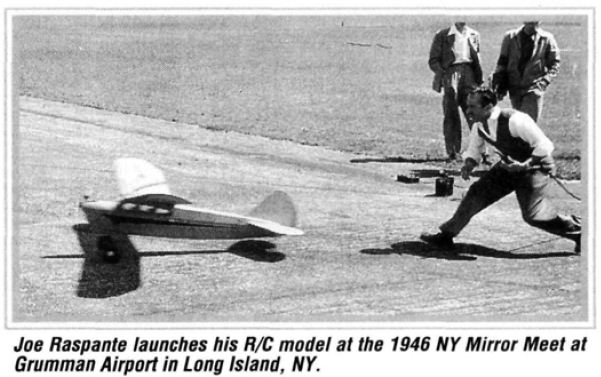 In retrospect, however, we see that most of the pioneer’s dedicated efforts were largely foiled by overly complex electrical designs. But without their perseverance, I doubt that R/C flight would have progressed as quickly to where it is today.