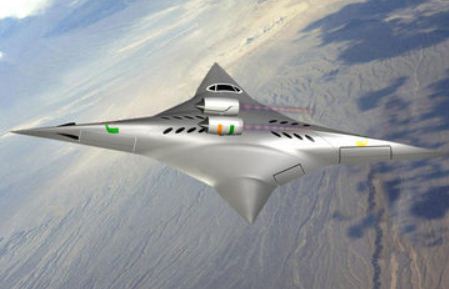 This bidirectional flying wing looks like science fiction, but it could be the airliner of the future … and it could get us to our destinations a lot more quickly! Check out this story from Technewsdaily:

The supersonic, bidirectional flying wing idea comes from a team headed by Ge-Cheng Zha, an aerospace engineer at the University of Miami, and including collaborators from Florida State University. He said the fuel-efficient aircraft could reach supersonic speeds without the thunderclap sound produced by a sonic boom — a major factor that previously limited where the supersonic Concorde passenger jet could fly over populated land masses.

“I am hoping to develop an environmentally friendly and economically viable airplane for supersonic civil transport in the next 20 to 30 years,” Zha said. “Imagine flying from New York to Tokyo in four hours instead of 15 hours.”

The U.S. military’s B-2 Spirit stealth bomber that debuted in 1989 represents the only previously successful flying wing aircraft, even though experimental flying wings flew before then. Zha’s bidirectional flying wing kicks the general concept up a notch by essentially laying two flying wings on top of one another at a 90 degree angle, so that the aircraft faces one way for subsonic flight and rotates another way for supersonic flight